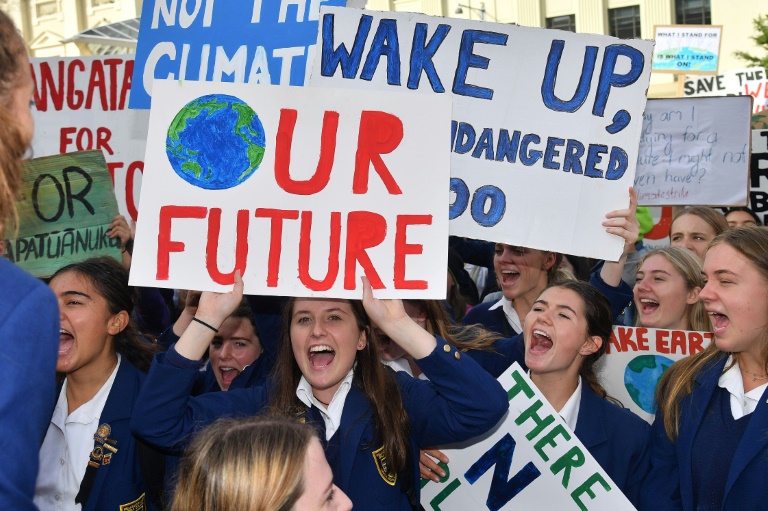 Tens of thousands of young people across Asia skipped school Friday to march through the streets, kicking off a global day of student protests aiming to spark world leaders into action on climate change.

Classrooms in capitals from Lagos to London were expected to be empty, as the ambitious organizers of the global student strike hoped to stage 1,000 demos in more than 100 countries.

Students flooded into the streets in Wellington, Sydney, Bangkok and Hong Kong carrying placards that read “There is no planet B”, “You’re destroying our future” and “If you don’t act like adults, we will.”

In Delhi, one of the world’s most polluted cities, around 200 students took part in a colorful protest, waving ribbons, juggling and performing stunts with hoops.

“We have to make a choice whether we want to sit and be indifferent or do something for our planet,” said 16-year-old student Srijani Datta, who also issued a warning to the world’s politicians.

“Most of us are 16-17 and we are going to turn 18 soon. We are going to be eligible for voting. As voters we will show we care about climate change. If you can’t give us that (fresh air and water), you will not get our votes.”

In Sydney, 18-year-old Charles Rickwood, warned that if nothing is done, Australia’s famous Great Barrier Reef could be destroyed.

“Especially if current trends in the environment continue, we’ll see the one, two degrees increase in our ocean then it will simply become unsustainable and we could lose the entire Great Barrier Reef,” he told AFP.

Parents of students in Christchurch in New Zealand were warned not to collect them with the city on lockdown after two crowded mosques were targeted in a mass shooting.

The worldwide protests were inspired by Swedish teen activist Greta Thunberg, who camped out in front of parliament in Stockholm last year to demand action from world leaders on global warming.

“We are only seeing the beginning,” tweeted Thunberg, who has been nominated for the Nobel Peace Prize for her activism.

However, the demos attracted mixed reactions from politicians.

In Australia, Education Minister Dan Tehan said the strike was “not something that we should encourage.”

But the budding activists received encouragement from New Zealand Prime Minister Jacinda Ardern, who said it was important for the young generation to send a message.

“We hear you and we’re getting on with setting a path for carbon neutrality,” the 38-year-old leader said in a statement.

“Please keep bringing as many people as you can with you because we simply won’t achieve our goals alone.”

In famously hard-working South Korea, demonstrations only began once lessons finished for the day.

“It’s hard for students to skip school in order to participate in this climate strike,” said organiser Jeong Juwon, 25.

“In South Korea, exam results are very important and it’s a big burden, and also the unemployment crisis is at its worst.”

Wellington university student Josie Mason, 20, said she was “excited by the fact that youth are being heard and are making a stand right now.”

“They call our generation the ‘slacktivists’ because it’s really easy to say you’re going to an event on a Facebook page or like something but not really do anything,” she said.

Loading the atmosphere with greenhouse gases at current rates, scientists agree, will eventually lead to an uninhabitable planet.

The planet is currently on track to heat up by double that figure.

The UN’s climate science panel warned in October that only a wholesale transformation of the global economy and consumer habits could forestall a catastrophe.

In Hong Kong, activists dressed up as polar bears and sharks to highlight the damage done to the environment by climate change.

“The main thing we want people to realize is that we are not only asking the Hong Kong government to do more, it is also people themselves who need to do more,” said Zara Campion, 17, co-organizer of the strike.

Delhi resident Shagun Kumari, 13, told AFP: “My eyes hurt from pollution. My shirt gets dirty from dust. I want fresh air that won’t harm my lungs and clean water to drink so that I don’t keep falling sick.”

Fellow Indian protester Datta noted: “If the children and youth don’t care then in a country like India you can’t make this happen.”

Photo: School children protest in the New Zealand capital as part of a worldwide movement to try and highlight inadequate progress to address climate change