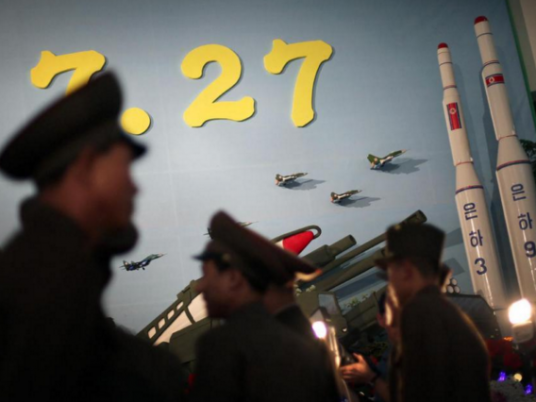 Less than a month after its purported H-bomb test, attention is now focused on whether North Korea is readying a rocket launch. With underground railways, giant tarps and a movable launch pad structure in place, experts say, the North is getting a lot better at concealing its preparations.
American and Japanese officials say they are seeing heightened activity at North Korea's main rocket facility, though they stress it's still unclear if a launch really is in the works or how soon it might come. Intelligence officials in Seoul, stung by their failure to predict the North's Jan. 6 nuclear test, are also cautiously warning another provocation could happen abruptly.
What North Korea might launch is a big question mark.
There are indications — including the construction of a new and taller gantry, visible in commercial satellite imagery — that it could be a bigger and better version of the Unha 3 space launch vehicle that lifted off from the Sohae facility in 2012, on the west coast of North Korea.
That would be in line with the North's own previous announcements.
The Unha 3 successfully delivered North Korea's first satellite into Earth orbit. A January 2013 report by the Rodong Sinmun, the ruling party newspaper, which has since been deleted from its online edition, quoted a scientist saying there would be a series of launches of observation and communication satellites culminating with Unha 9, which would carry a lunar orbiter. A North Korean space agency official told an AP television crew last year that more satellite launches are planned in the years ahead, but didn't elaborate.
Models of the larger and much more formidable-looking Unha 9 rocket have since been displayed at various events in North Korea, including annual flower shows held in honor of national founder Kim Il Sung and his son, Kim Jong Il.
Although there are important differences, the United States and others have strongly criticized such rocket launches because similar technologies can be used in the development of ICBMs, which North Korea is banned from doing under UN restrictions. North Korea says that it has the right to maintain a peaceful space program and announces launches ahead of time to maritime authorities, in keeping with international standards.
Tightening its punitive squeeze on the North, the US Treasury on Jan. 17 announced sanctions on 11 individuals and entities involved in Iran's ballistic missile program, including Iranian officials it said had direct links to North Korea and work being done by Pyongyang on "an 80-ton rocket booster."
It said two of the sanctioned Iranians "have been critical to the development of the 80-ton rocket booster, and both traveled to Pyongyang during contract negotiations." Iran has, coincidentally, suggested it might also conduct a rocket launch this month.
Whether the booster would be a new first stage for the Unha rockets or something different is not known.
Making firm predictions has become more difficult because of the increasingly sophisticated concealing measures the North has been developing over the past several years.
Though the kind of intelligence available to agencies in the US and its allies is presumably far better than what they are willing to let on publicly, it is clear from unclassified commercial satellite monitoring that a lot has been going on at the North's main launching facility since the 2012 Unha 3 launch.
Concealment upgrades include the construction of an underground railway right up to the launch pad that allows rocket stages to be transported stealthily to the site, possibly from Pyongyang. Upon arrival, the stages could be lifted directly from the train by elevator into a structure above for assembly then moved in another newly built mobile structure by rail to the gantry, which recently has been covered by a huge tarp.
"In effect, you're not going to see any of that happening, whereas before they would be moving stuff around on trucks that you might be able to spot. So that really makes things much more difficult," said Joel Wit, a former State Department official and editor of the respected 38 North website, which focuses on North Korea issues.
Wit said some activity still cannot be concealed, but with the upgrades "it becomes more like reading tea leaves."
"They may be ready to test," he said. "Right now, we can't tell."
North Korea's efforts at concealment appear to be paying off on the nuclear front as well.
The paucity of detailed intelligence due to a deeper blast at the end of a longer tunnel, better sealing of tunnels and vents and improved camouflage at its nuclear site has muddied analysts' ability to assess the North's claim that the latest test was the successful detonation of its first hydrogen bomb — which if true would mark a significant advance in the North's nuclear technology.
In the case of rocket preparations, North Korea knows when commercial satellites are over their area because most are synchronized with the sun and pass over the same point of the Earth at about the same time. For North Korea, that's between 10 am and 1 or 2 pm so they tend to stop activity during that window, or move trucks under cover or keep activity in buildings to prevent detection.
Such moves would not be as effective against the best government-operated spy satellites, which can provide almost constant surveillance of high-interest sites and can also see through clouds and the cover of darkness.
But Joe Bermudez, an expert on North Korea's military and chief analytics officer of AllSource Analysis, Inc. said the country's effort to improve its "camouflage, concealment and deception" has been quite elaborate.
"The North Koreans are not stupid people," said Bermudez, who has been studying North Korea defense and intelligence affairs for 35 years, and since the 90s has been using satellite imagery analysis. "Particularly those in the intelligence community and those involved in the programs to produce WMD watch and read the foreign press. As we use commercial satellite imagery to identify activities in North Korea, they are watching and looking at what we are seeing and they are making adjustments."