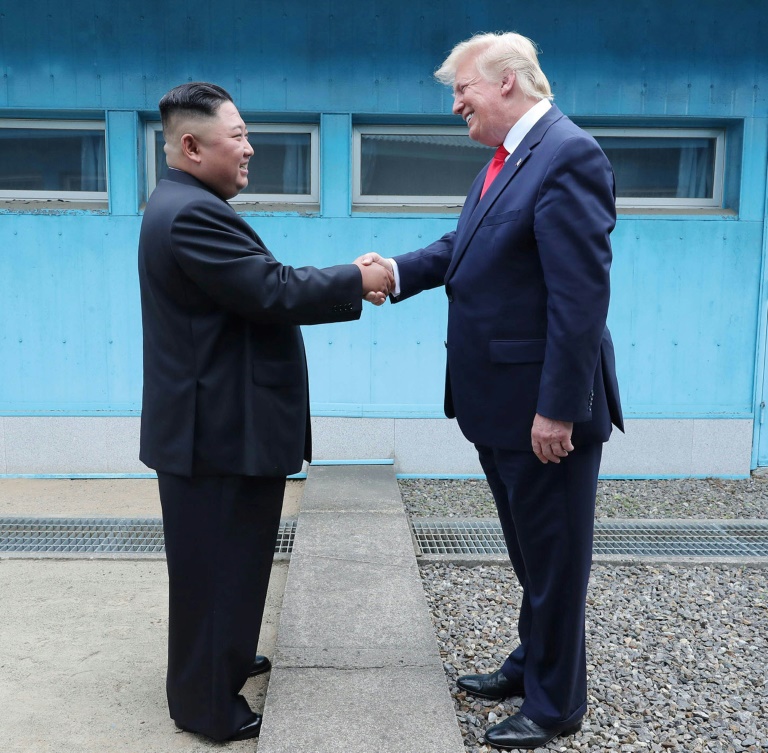 North Korea on Monday hailed the weekend meeting between leader Kim Jong Un and US President Donald Trump in the Demilitarized Zone as “historic”, as analysts said Pyongyang was looking to shape the narrative to its own agenda.

The two leaders agreed to “resume and push forward productive dialogues for making a new breakthrough in the denuclearization of the Korean peninsula”, the official Korean Central News Agency said.

After a Twitter invitation by the US president on Saturday, the two men met a day later in the strip of land that has divided the peninsula for 66 years since the end of the Korean War, when the two countries and their allies fought each other to a standstill.

Kim and Trump shook hands over the concrete slabs dividing North and South before Trump walked a few paces into Pyongyang’s territory — the first US president ever to set foot on North Korean soil.

“The top leaders of the DPRK and the US exchanging historic handshakes at Panmunjom” was an “amazing event”, KCNA said, describing the truce village as a “place that had been known as the symbol of division” and referring to past “inglorious relations” between the countries.

The meeting took place “at the suggestion of Trump”, it added.

The impromptu meeting in the DMZ — where the US president said they agreed to resume working-level talks within weeks on the North’s nuclear programme — was full of symbolism.

Trump’s border-crossing — which he said was uncertain until the last moment — was an extraordinary sequel to the scene at Kim’s first summit with Moon Jae-in last year, when the young leader invited the South Korean president to walk over the Military Demarcation Line, as the border is officially known.

KCNA described it as a “historic moment”, marking the “first time in history” a sitting US president set foot on North Korean soil.

Pictures from the meeting — including a sequence of images from the two men emerging from opposite sides for a handshake and a skip across the border — were splashed across the front page of the official Rodong Sinmun newspaper, which carried 35 images in total.

Shin Beom-chul, an analyst at the Asan Institute of Policy Studies, said the KCNA report was “typical North Korean propaganda that glorified Kim as leading the tremendous changes in geopolitics”.

“The objective was to recover Kim’s damaged status after he returned from the Hanoi summit empty-handed,” Shin added.

Analysts have been divided on Sunday’s events, some saying they spurred new momentum into deadlocked nuclear talks, while others described them as “reality show theatrics”.

The first Trump-Kim summit took place in a blaze of publicity in Singapore last year but produced only a vaguely worded pledge about denuclearization.

A second meeting in Vietnam in February collapsed after the pair failed to reach an agreement over sanctions relief and what the North was willing to give in return.

Contact between the two sides has since been minimal — with Pyongyang issuing frequent criticisms of the US position — but the two leaders exchanged a series of letters before Trump issued his offer to meet at the DMZ.

As well as the working-level talks, Trump also floated the idea of sanctions relief — repeatedly demanded by Pyongyang — and said he invited the North Korean leader to the White House.

Such a trip would have to come “at the right time”, he added.

KCNA was less specific, saying Kim and Trump discussed “issues of mutual concern and interest which become a stumbling block”.

Trump regularly calls Kim a “friend” and KCNA cited the North Korean leader as lauding their “good personal relations”, saying they would “produce good results unpredictable by others and work as a mysterious force overcoming manifold difficulties and obstacles”.

Vipin Narang of the Massachusetts Institute of Technology said the North was portraying Kim as “being courted by Trump”.

“Note very carefully the sequence of issues here,” he said on Twitter. “Easing tensions, ending inglorious relations, and then working on denuclearization of the Korean Peninsula (again, not just North Korea).

“Kim is still not offering to unilaterally disarm.”

Image: KCNA VIA KNS/AFP / KCNA VIA KNS Kim and Trump shook hands over the concrete blocks dividing North and South before Trump became the first US president ever to set foot on North Korean soil