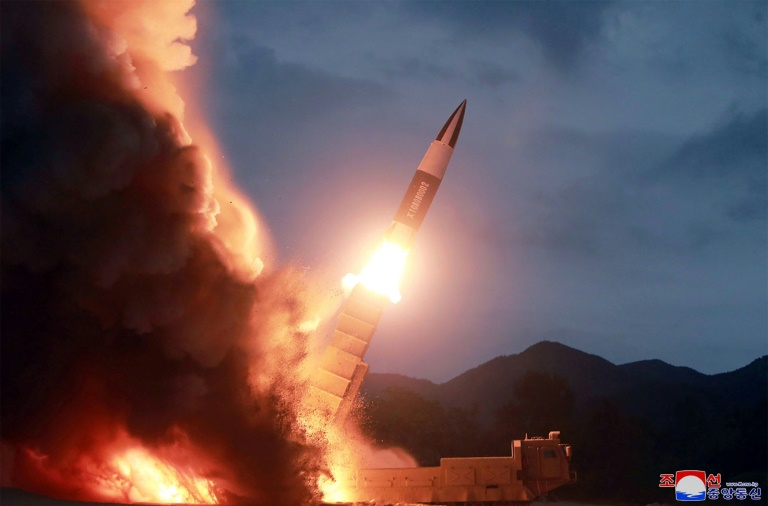 North Korean leader Kim Jong Un supervised a “new weapon” test, state media reported Sunday, the latest in a series of launches that US President Donald Trump has played down as Washington seeks to restart nuclear talks with Pyongyang.

The report carried by the Korean Central News Agency followed Trump’s comments that Kim had expressed a willingness to meet once the US-South Korean exercises are over and apologized for the slew of missile tests.

Saturday’s launch was the North’s fifth test in two weeks as it protests the annual military drills under way between Seoul and Washington which always infuriates Pyongyang.

Defence officials in Seoul said Pyongyang fired what appeared to be two short-range ballistic missiles Saturday, flying 400 kilometers (250 miles) before splashing down in the sea between the Korean peninsula and Japan.

KCNA provided no technical specifications but said Sunday they were a “new weapon” developed to suit the country’s “terrain condition”.

The official Rodong Sinmun newspaper carried several photos showing a broadly grinning Kim surrounded by his aides as he observed the test.

Kim Dong-yub, a researcher at the Institute for Far Eastern Studies, said the weapons were likely to be new short-range ballistic missiles that are part of Pyongyang’s modernization of its military capabilities.

They were the “North Korean version of a low-cost, high-efficiency retaliation system” aimed at “incapacitating missile defense systems” in the South, Kim added.

In a statement issued by KCNA on Sunday, the North’s foreign ministry said the South’s refusal to cancel its joint drills with the US had effectively scuppered any prospect of future talks with Seoul.

“They had better keep in mind that this dialogue would be held strictly between (North Korea) and the US, not between the North and the South,” it said.

Trump has appeared determined to secure a denuclearization agreement with North Korea ahead of next year’s US presidential elections, despite a breakdown in talks since he first met Kim in a historic summit in Singapore in June 2018.

Even after their abortive second summit in February — and as Pyongyang has continued to test short-range missiles — Trump has been reluctant to criticize the North Korean leader.

On Friday the US president said he agreed with Kim’s opposition to the war games -– albeit for financial rather than military reasons — and indicated the missile launches were not important.

“I’ll say it again. There have been no nuclear tests. The missile tests have all been short-range. No ballistic missile tests, no long-range missiles,” Trump said.

Then on Saturday, Trump said Kim had expressed in a letter his willingness to meet and resume negotiations once the US-South Korean exercises are over.

Kim also offered a “small apology for testing the short range missiles,” the US leader noted, and said the tests would end once the military drills wrap up on August 20.

The pair last met in late June for brief talks in the Demilitarized Zone separating the two Koreas — and Trump became the first sitting US president ever to step inside the North.

Shin Beom-chul, an analyst at the Asan Institute for Policy Studies in Seoul, said Trump’s downplaying of the launches were equivalent to endorsing the missile tests.

“If Kim felt the missile tests could jeopardize the dialogue momentum, he would refrain. But right now, it’s as if North Korea has a licence to fire short-range missiles,” Shin told AFP.

Leif-Eric Easley, a professor at Ewha University in Seoul, said by appealing directly to Trump, Kim was “trying to drive a wedge between Washington and Seoul” as Pyongyang seeks to break the alliance.

Washington and Seoul pledged in March to scale down their joint drills in an effort to foster denuclearization efforts.

While past exercises involved extensive combat field training — with thousands of American troops coming in from several countries to take part — the current games are decidedly low-key, with the emphasis on computer-simulated scenarios.

Image: KCNA VIA KNS/AFP / KCNA VIA KNS This picture released from KCNA shows the test of the weapon at an undisclosed location in North Korea