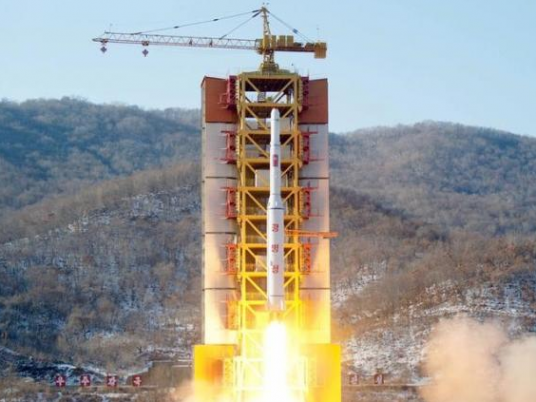 North Korea launched a long-range rocket on Sunday carrying what it has called a satellite, but its neighbors and Washington denounced the launch as a missile test, conducted in defiance of UN sanctions and just weeks after a nuclear bomb test.
The US Strategic Command said it had detected a missile entering space, and South Korea's military said the rocket had put an object into orbit.
North Korea said the launch of its satellite Kwangmyongsong-4, named after late leader Kim Jong Il, was a "complete success" and that it was making a polar orbit of the earth every 94 minutes. The launch order was given by his son, leader Kim Jong Un, who is believed to be 33 years old.
The launch prompted South Korea to announce it would begin talks with the United States on the deployment of an advanced missile defense, which China and Russia both oppose, to counter what South Korea sees as the North's threat.
North Korea's state TV carried still picture of a white rocket, that closely resembled a previously launched rocket, lifting off. Another showed Kim surrounded by cheering military officials at what appeared to be a command centre.
North Korea's last long-range rocket launch, in 2012, put what it called a communications satellite into orbit, but no signal has ever been detected from it.
"Everything we have seen is consistent with a successful repeat of the 2012 (launch)," said US missile technology expert John Schilling.
"But it's still too early to tell for sure," said Schilling, who is involved in the "38 North" North Korean monitoring project at Johns Hopkins University.
The rocket was launched at around 9:30 a.m. Seoul time (0030 GMT) in a southward trajectory, as planned. Japan's Fuji Television Network showed a streak of light heading into the sky, taken from a camera at China's border with North Korea.
North Korea had notified UN agencies that it planned to launch a rocket carrying an Earth observation satellite, triggering opposition from governments that see it as a long-range missile test.
The UN Security Council will hold an emergency meeting on Sunday to discuss the launch, at the request of the United States, Japan and South Korea, diplomats said.
The United States tracked the rocket launch and said it did not believe that it posed a threat to the United States or its allies, defense officials said.
Isolated North Korea had initially given a Feb. 8-25 time frame for the launch but on Saturday changed that to Feb. 7-14, apparently taking advantage of clear weather on Sunday.
North Korea's National Aerospace Development Administration called the launch "an epochal event in developing the country's science, technology, economy and defense capability by legitimately exercising the right to use space for independent and peaceful purposes".
The rocket launch and the Jan. 6 nuclear test are seen as efforts by the North's young leader to bolster his domestic legitimacy ahead of a rare ruling party congress in May, which will be the first since 1980.
New missile defense?
South Korea said later on Sunday it would begin discussions with the United States on an advanced missile-defence system called Terminal High Altitude Area Defence (THAAD).
South Korea had been reluctant to discuss openly the possibility of deploying THAAD, caught between its biggest ally, the United States, and its largest trading partner, China, which has expressed concern about a system whose radar could penetrate its territory.
"If THAAD is deployed to the Korean peninsula, it will be only operated against North Korea," South Korean defence ministry official Yoo Je-seung told a news conference with Thomas S. Vandal, commander of the Eighth US Army based in South Korea.
US Secretary of State John Kerry said the United States would work with the UN Security Council on "significant measures" to hold North Korea to account for what he called a flagrant violation of UN resolutions on North Korea's use of ballistic missile technology.
Kerry reaffirmed "ironclad" US defense commitments to allies Japan and South Korea and called the launch a destabilizing and unacceptable challenge to peace and security.
China expressed regret and called on all sides to act cautiously and refrain from steps that might further raise tension. China is North Korea's main ally, although it disapproves of its nuclear weapons program.
"China expresses regret that North Korea, in spite of the pervasive opposition of the international community, insisted on using ballistic missile technology to carry out a launch," foreign ministry spokeswoman Hua Chunying said.
UN Secretary-General Ban Ki-moon strongly condemned the launch and urged North Korea to "halt its provocative actions".
US allies South Korea, Australia and Japan condemned the launch.
South Korean President Park Geun-hye said it was an unforgivable act of provocation. Foreign Minister Yun Byung-se said there would be a stepped up efforts on sanctions.
Australia said North Korea posed a global threat while Japanese Prime Minister Shinzo Abe said the launch was "absolutely unacceptable", especially after the North's nuclear test last month.
North Korea has said that its fourth nuclear test was of a hydrogen bomb. However, the United States and other governments have expressed doubt over that claim.
North Korea is believed to be working on miniaturising a nuclear warhead to mount on a missile, but many experts say it is some time away from perfecting such technology.
It has shown off two versions of a ballistic missile resembling a type that could reach the US West Coast, but there is no evidence the missiles have been tested.
North Korea says it has a sovereign right to pursue a space program.