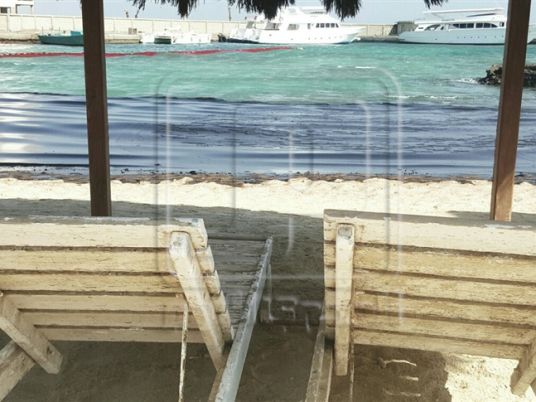 The Red Sea resort town of Hurghada continued to be plagued by crude oil spills on Tuesday, amid claims from marine environment protection groups that officials had not done enough to prevent pollution in the area.

The Environment Ministry, meanwhile, has laid the blame the feet of an unnamed oil company for allowing an oil leak on Friday and failing to prevent it spreading to the sea.
The environmental crisis started on Friday when oil slicks were seen floating in the sea off northeastern Hurghada.
The committee carried out a survey on Sunday in cooperation with nature-reserve officials to determine the path and movement of the spills and the areas covered. The committee reported the presence of elongated and scattered spills stretching for about 6 km.
According to local fishermen and marine-environment protection associations, the pollution extended on Saturday to Dahar Abu Malh in northern Hurghada, which is rich of coral reef and easily damaged by oil pollution. They warned of fish being killed by the pollution.
The Environment Ministry committee, meanwhile, appealed to directors of Hurghada resorts to immediately report oil spills near their beaches. The committee accused a petroleum company of neglect in causing the leak on Friday, allowing it to flow into the sea rather than containing it properly.
Hamada Ghallab, MP for Hurghada and Ras Gharib and undersecretary of parliament's Environment and Energy Committee,  said on Sunday that the committee was keeping abreast of developments.
Ghallab said that the spill, caused by a petroleum company operating in the Red Sea, extended for several kilometers and would affect the marine environmnent and organisms. He called on officials to contain the spill as soon as possible.
There have been several oil spills off Hurghada and other Red Sea resorts in recent years, each time causing concerns for the impact on the tourism industry.

Hurghada has grown from a sleepy fishing village in the early 1980s into one of the biggest resort cities on the Red Sea, with over 40,000 hotel rooms. Prior to the 2011 uprising, its clear waters and world-class reefs drew over 2.5 million tourists a year, generating about US$3 billion and providing jobs for 250,000 residents and temporary workers.

However, the resort has grown up in the shadow of oil development. Over 180 offshore platforms dot the Gulf of Suez, squeezing the last drops from maturing subsea oil fields.