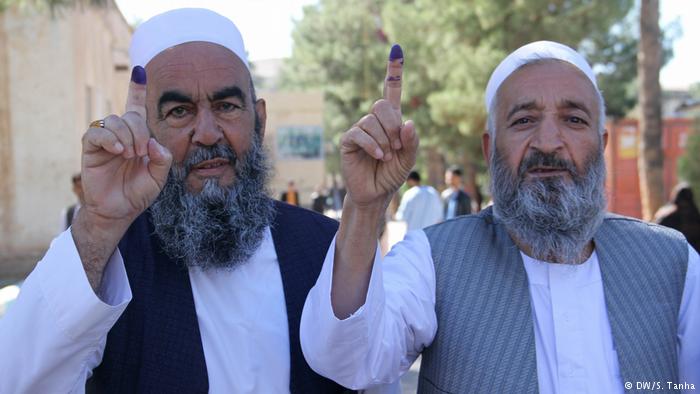 Afghan voters have shown their democratic determination by voting in parliamentary elections at the risk of their lives. It’s state authorities and US policy toward the Taliban hindering democracy, says Florian Weigand.

Is democracy possible in Afghanistan? Absolutely, judging by the country’s electorate.

DW correspondents and Afghan media outlets have reported long lines outside of polling stations. According to official information, more than 3 million out of the 8.8 million registered voters cast their ballots on Saturday evening — an impressive number considering the threats of violence made by the Taliban and the organizational chaos surrounding the election.

Young, urban voters were particularly eager to cast their ballots, and they didn’t hold back from sharing with the media their determination to vote, either. Afghanistan’s youngest voters have faint — if any — memories of the Taliban government, and they’ve grown up living in an unstable, yet definitely democratic country. Although the prospect of having a political say remains murky, it shows that democracy is working and gives hope for the future. But democracy looks more questionable when it comes to Afghanistan’s public officials and security forces. They have appeared incapable of and unwilling to ensure a smooth election.

It will be difficult to calculate just how many Afghans were prevented from voting due to the organizational chaos. Indeed, almost a third of all polling stations remained shut on Saturday. One common reason for this was that biometric identification systems in polling stations did not work.

Authorities consequently extended voting, allowing voters to cast their ballots on Sunday in 400 electoral districts. Voters in Ghazni province, meanwhile, were prevented from casting their ballots altogether. And not because of the Taliban, but because Afghan authorities failed to reach an agreement over the borders of various electoral districts. By the same token it will be impossible to calculate how many people abstained from voting out of fear of the Taliban, who launched some 200 attacks on Saturday, killing at least 36 people and injuring hundreds. Some 70,000 soldiers and police officers stationed before and during the vote failed to thwart the attacks, including in the heavily fortified capital city Kabul.

Nor could they prevent the killing of a regional police chief in the city of Kandahar two days ahead of the vote. Here, the vote has been postponed until next week, when the security situation will have hopefully returned to normal. Afghanistan’s security forces have failed dismally. This does not bode well for the future.

And what about the role of Afghanistan’s ally, the United States? Things don’t look very promising in this regard, either. On October 12, the US special adviser to Afghanistan, Zalmay Khalilzad, met the Taliban — without involvement of the Afghan government. The Americans are well aware that the Taliban are undermining Afghanistan’s pathtoward democratic stability. Yet they are willing to tolerate this as they hope to swiftly reach a peace deal and subsequently withdraw their troops. But the actions of the US stymie Afghanistan’s democratization processes.

The people of Afghanistan have demonstrated that they are willing to shape their own political future — despite the numerous obstacles in their way. Much work now lies ahead for the state and its allies before the presidential election in spring 2019.

Afghanistan in shock after death of powerful police commander

Who would want to be an Afghan MP?