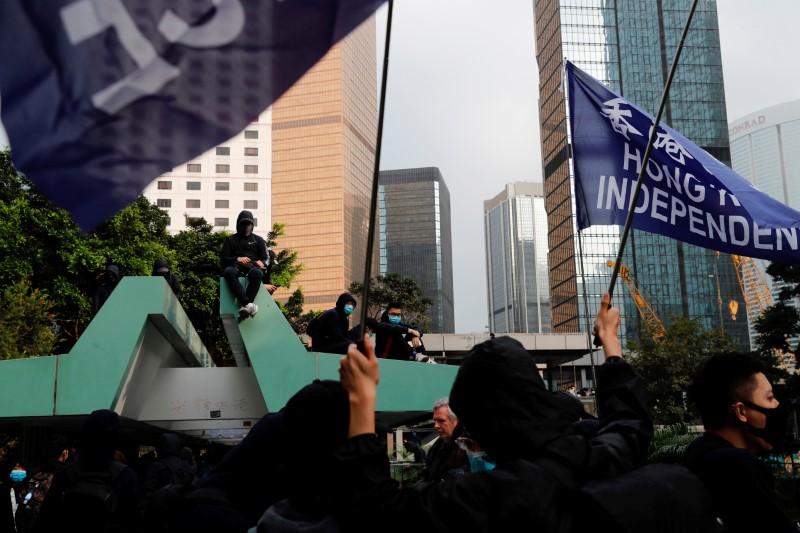 Out in numbers before the demonstration began, police intervened promptly when the rally turned into an impromptu march. Several units of police in riot gear were seen chasing protesters and several arrests were made.

A water cannon truck drove on central streets, flanked by an armored jeep, but was not used.

Organizers initially applied for a permit for a march, but police only agreed to a static rally in the park, saying previous marches have turned violent.

Once protesters spilled onto the streets, some of them, wearing all-black clothing, barricaded the roads with umbrellas and street furniture, dug up bricks from the pavement and smashed traffic lights.

Police said in a statement two police community liaison officers were attacked with wooden sticks and sustained head injuries. They also said some protesters threw water bottles at some other officers who were conducting a ‘stop and search’ operation.

“In view of the violent incidents, police officers have asked the organizer to halt the public meeting … and urge participants to … leave the area by public transport,” the statement said.

The “Universal Siege Against Communism” demonstration was the latest in a relentless series of protests against the government since June, when Hong Kongers took to the streets to voice their anger over a now-withdrawn extradition bill.

The protests, which have since broadened to include demands for universal suffrage and an independent investigation into police handling of the demonstrations, had lost some of their intensity in recent weeks.

In an apparent new tactic, police have been showing up ahead of time in riot gear, with officers conducting “stop and search” operations near expected demonstrations.

“Everyone understands that there’s a risk of stop-and-search or mass arrests. I appreciate Hong Kong people still come out courageously, despite the risk,” said organizer Ventus Lau.

On Jan 1, a march of tens of thousands of people ended with police firing tear gas to disperse crowds.

The gathering in the park was initially relaxed, with many families with children listening to speeches by activists.

In one corner, a group of volunteers set up a stand where people could leave messages on red cards for the lunar new year to be sent to those who have been arrested. One read: “Hong Kongers won’t give up. The future belongs to the youth”.

Authorities in Hong Kong have arrested more than 7,000 people, many on charges of rioting that can carry jail terms of up to 10 years. It is unclear how many are still in custody.

Anger has grown over the months due to perceptions that Beijing was tightening its grip over the city, which was handed over to China by Britain in 1997 in an deal that ensured it enjoyed liberties unavailable in the mainland.

Beijing denies meddling and blames the West for fomenting unrest.

Firms in China remain wary despite US trade deal