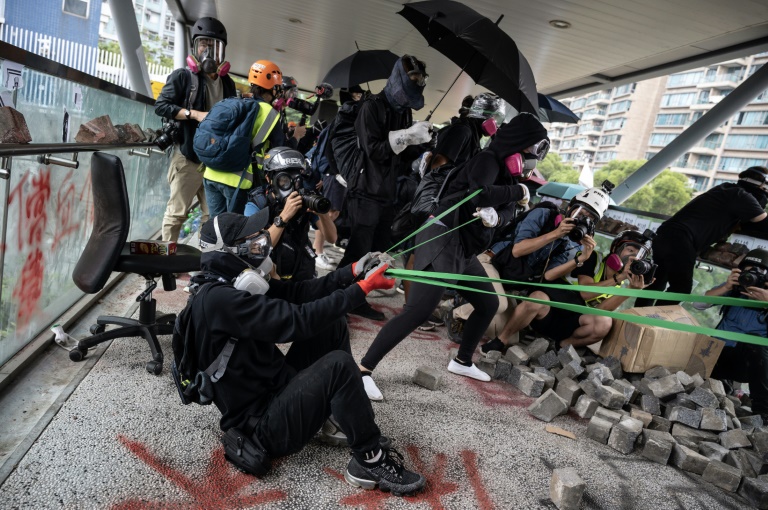 Hong Kong protesters struck the city’s transport network for a second day running on Tuesday as western powers voiced concern over spiralling violence after police shot a young demonstrator and another man was set on fire.

The flare-up is the latest in the 24 straight weeks of increasingly violent rallies in Hong Kong, aimed at securing greater democratic freedoms from China.

Universities were a major flashpoint with police firing tear gas at protesters who had blocked roads leading to the City University of Hong Kong.

An AFP photographer saw protesters using a three-person slingshot to fire bricks at police from a footbridge during the sporadic clashes.

Masked activists also built barricades and blocked roads at both Hong Kong University and the Chinese University of Hong Kong.

And at Polytechnic University, clashes broke out as police tried to arrest a female student.

Owan Li, the student representative on the university’s governing body, said he was beaten by police as he tried to mediate.

“The officers were rather arrogant and unbridled,” Li told AFP, sending pictures of bruises to his hand and leg.

“They said I was being aggressive and obstructing their work, then six to seven of them dragged me out and gave me a round of beating and kicking.”

Small bands of masked protesters also blocked roads in the area, the second day in a row such a tactic has been deployed, prompting the deployment of riot police.

Chinese state media on Tuesday praised Hong Kong’s police for its “restraint”, but warned that the People’s Liberation Army was on hand if necessary to support the force.

China has ruled Hong Kong under a “one country, two systems” framework since its handover from the British in 1997.

The protesters are desperate to stop what they see as Beijing’s tightening control over Hong Kong, and reneging on its handover commitment to allow greater liberties for the city than those on the mainland.

On Monday, the financial hub was convulsed by some of the worst violence yet as crowds reacted to the shooting of a 21-year-old protester by rampaging through train stations, barricading streets and vandalizing shops throughout the day and night.

Footage of the shooting — broadcast live on Facebook by a bystander — showed a police officer drawing a pistol as he tried to detain a masked person at a junction that had been blocked by protesters.

Another unarmed masked protester then approached the officer and was shot, quickly falling to the ground.

The video quickly went viral and inflamed already sky-high anger towards the police.

Horrifying footage also emerged of a man being doused with a flammable liquid and set ablaze by a masked assailant following an argument with pro-democracy protesters.

Both the man set alight and the shot protester remained in critical condition on Tuesday, hospital authorities said.

The violence prompted western powers to urge Beijing and Hong Kong leader Carrie Lam to find a compromise with protesters who are seeking greater democratic freedoms and police accountability.

“We condemn violence on all sides, extend our sympathies to victims of violence regardless of their political inclinations, and call for all parties — police and protesters — to exercise restraint,” State Department spokeswoman Morgan Ortagus said in a statement.

“Political dialogue is the only way forward and we want to see the Hong Kong authorities agree a path to resolve this situation,” Downing Street said in a statement

But there is little sign Beijing or Lam are willing to offer any political concessions.

As clashes raged on Monday, Lam said protesters were indulging in “wishful thinking” if they thought violence would achieve political change.

On Tuesday morning, she gave another press conference criticizing protesters and praising people who tried to make it into work.

Lam has been either unable or unwilling to end the five-month political crisis as Beijing insists she takes a hard line.

In a leaked audio recording from September, Lam told business leaders her room for maneuver was “very, very, very limited” and that she “has to serve two masters” — a reference to Beijing.

Image: AFP / Philip FONG The current flare-up is the latest in 24 straight weeks of increasingly violent rallies in Hong Kong