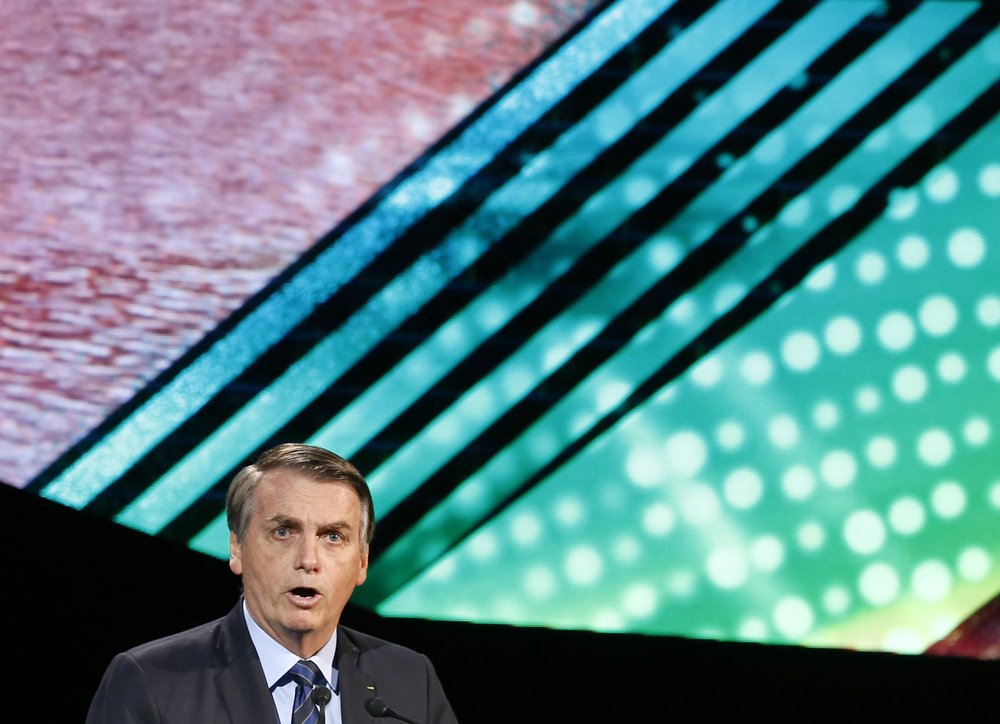 RIYADH, Saudi Arabia (AP) — Brazil’s president launched a fiery defense of his far-right government on Wednesday during a visit to Saudi Arabia, blasting international criticism of his handling of blazes this summer in the Amazon that drew worldwide attention over global warming fears.

Bolsonaro described his birth, life and election last year as a “miracle” after surviving being stabbed in an assassination attempt during his campaign, which focused on anti-corruption.

“When I took office, the country was virtually destroyed economically and ethically and morally destroyed,” Bolsonaro said through an interpreter. “The Brazilian people have placed their bets on us. They have given us a vote of confidence.”

However, human rights activists have accused Bolsonaro of giving a green light to illegal police killings, undermining anti-torture initiatives and blocking the prosecution of groups that caused fires in the Amazon this year.

Bolsonaro repeatedly described criticism raised against him as “fake news,” channeling a common refrain by Trump, who faces a spiraling impeachment investigation by Congress.

The Amazon criticism in particular drew anger from the Brazilian leader in his speech at the investment summit, which has so far been consumed by a possible initial public offering of the kingdom’s state-run oil behemoth Saudi Aramco.

“The Amazon region belongs to us,” Bolsonaro said at one point. He added that Amazonian farmers “no longer want to be treated consistently as if they are cave men or women or prehistoric human beings.”

Scientists say the vast rainforest is a bulwark against global warming as its lush vegetation absorbs heat-trapping carbon dioxide from the atmosphere. The moisture given off by its trees also affects rainfall patterns and climate across South America and beyond.

International outcry earlier this year led Bolsonaro to ban Amazon farmers from lighting fires for 60 days and send federal troops to help combat the blazes. However, Bolsonaro criticized Macron for trying to bring up the fires at the recent Group of Seven summit in France.

“The Amazon region is not on fire, it’s not catching fire. It’s by definition a tropical rainforest. It cannot possibly be caught on fire,” the Brazilian president said. “I was accused of being an incendiary and a deforester.”

Bolsonaro also sought to contrast his government, which he described as being a safe place for foreign investment, against others in Latin America like Argentina, Chile and crisis-stricken Venezuela.

Later, Bolsonaro said that he “personally would like very much for Brazil to become a member of OPEC,” the oil cartel led by Saudi Arabia. He did not elaborate.

Photo: Brazilian President Jair Bolsonaro speaks during the Future Investment Initiative forum in Riyadh, Saudi Arabia, Wednesday, Oct. 30, 2019. Bolsonaro has launched a fiery defense of his far-right government while on a visit to Saudi Arabia, blasting any criticism of his policies on recent fires in the Amazon region. (AP Photo/Amr Nabil)