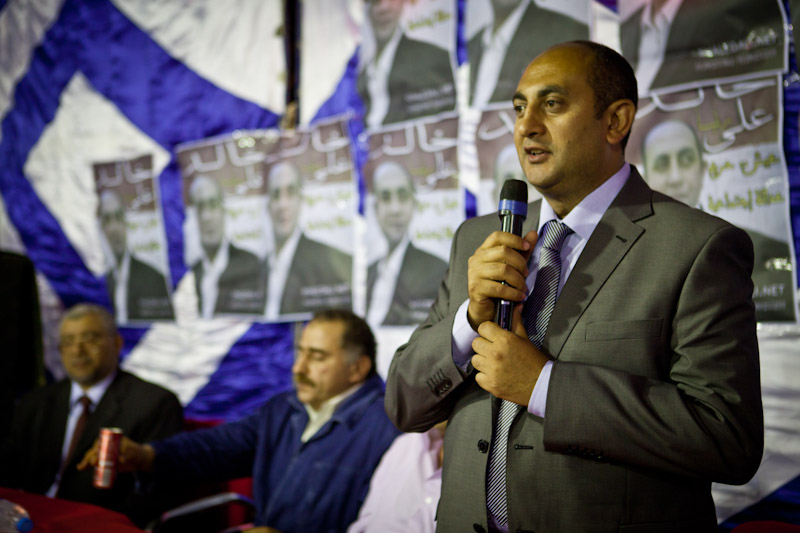 Renowned rights lawyer Khaled Ali announced on Monday his bid to run for president in the upcoming elections, scheduled for March or April, as well as the formation of his campaign team.

“Egypt is in a political crisis,” Ali said during a press conference held at the headquarters of the al-Dostour Party, which he began with a minute of silence, to mourn the martyrs of the army and police.

“They said that these people did not find someone to be kind to them, and then crushed them by (soaring) prices,” the presidential hopeful added.

Ali said that it is the right of the people to choose their ruler, and that he is currently preparing to launch his election campaign. He added that he would work with authorities to receive guarantees that the integrity of the presidential elections would remain intact.

Prior to the presser, Ali said that security forces raided the printing house responsible for printing documents that were intended to be used at the event, including documents displaying his intentions to run for president.

“The security forces seized and confiscated some of the papers and ripped the rest in a repressive attempt to pre-empt the conference, and confirmed the extent of the security state’s lack of any attempt to open the public domain and put forward alternative visions,” Ali said in a post on Facebook.

“In this context, this proactive attack will not prevent us from holding our press conference at 5 pm at the headquarters of al-Dostour Party in Dokki. And we confirm that the confiscation of the papers which include a vision trying to put forth different ways to face the crisis of governance in Egypt, in light of the dangers facing the Egyptian state and threats of a dark destiny, will not prevent us from presenting these visions to the Egyptian people,” the post continued.

Khaled Ali to decide on running in presidential race within hours

He added that hope is always dependent on the people’s ability to change, resist injustice and actively participate in proposing better alternatives for the future.

On his part, head of al-Dostour Party Khaled Daoud said that the Egyptian people is nearing presidential elections, and that his and other parties of the civil current are working within the framework of the constitution and the law. He added that they have the right to present a presidential candidate despite the difficult circumstances the country is experiencing at the moment.

Daoud noted that the party has a strong relationship with Ali, and that he is one of the young figures working for the economic and social rights of Egyptian citizens. He said that the civil current is not against the state or the regime, but it supports the rights of citizens in a modern democratic state.

“We do not have to choose between the old authoritarian state and the Islamic trend, and we dream of a democratic state in which state institutions are respected,” he said.

Khaled Ali is a prominent lawyer who ran as a presidential candidate in the 2012 elections that followed the 25 January revolution in 2011. Ali came in seventh in the 2012 presidential race, which the former Muslim Brotherhood president won in the runoff elections against army-affiliated Ahmed Shafiq.