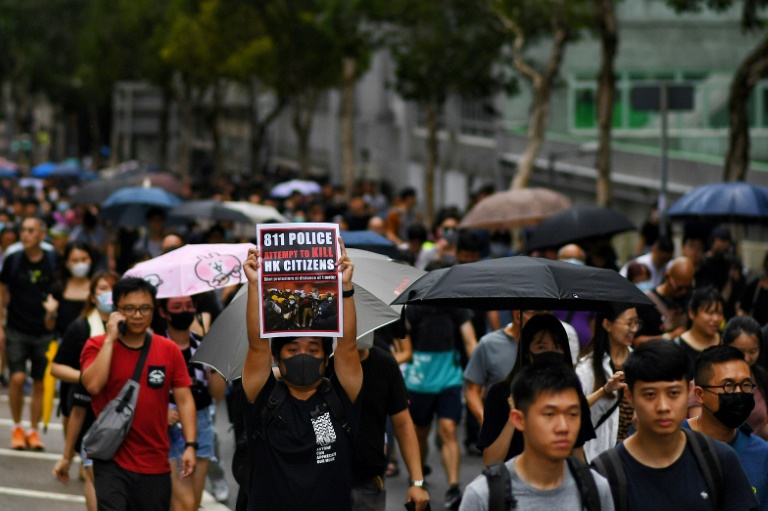 Hong Kong democracy activists kicked off a weekend of fresh rallies on Saturday in a major test for the movement following criticism over an airport protest earlier this week — and as concerns mount over Beijing’s next move.

The new marches came as thousands of pro-government supporters — many waving Chinese flags — gathered in a park to condemn their opponents and support the police, a stark illustration of the polarization now coursing through the city.

Democracy activists are billing the weekend rallies as a way to show Beijing and the city’s unelected leaders that their movement still enjoys broad public support, despite increasingly violent tactics deployed by a minority of hardcore protesters that have cast a shadow.

On Tuesday, protesters blocked passengers from boarding flights at the city’s airport and later assaulted two men they accused of being Chinese spies.

The images damaged a movement that until then had largely only targeted the police or government institutions, and prompted some soul-searching among protesters.

China’s propaganda apparatus seized on the violence, with state media churning out a deluge of damning articles, pictures and videos.

State media also ran images of military personnel and armored personnel carriers across the border in Shenzhen, prompting the United States to warn Beijing against sending in troops, which analysts say would be a reputational and economic disaster for China.

Saturday’s rallies began with thousands of teachers marching through torrential rain in support of the largely youth-led protests.

In the afternoon thousands also marched through Hung Hom and To Kwa Wan, two harbourside districts popular with mainland tourists.

Some protesters targeted the local offices of the staunchly pro-Beijing Federation of Trade Unions, pelting it with eggs and spraying graffiti.

The government has yet to respond to a single demand and has escalated force through the police to suppress the people’s voices,” a 25-year-old protester, who gave his first name Mars, told AFP.

“If we don’t come out, our future, our next generation will face even more suppression,” he added.

But across the harbor at the pro-Beijing rally, where a giant screen showed recent clashes with police, 60-year-old retiree Irene Man had a very different take as she rounded on democracy protesters.

“Their acts are not human, they have all become monsters. They are rioters, with no reason, no thinking,” she said.

The biggest pro-democracy rally is expected to take place on Sunday on the main island.

Billed as a “rational, non-violent” protest, it is being organized by the Civil Human Rights Front, a group that eschews confrontations with police and was the driving force behind record-breaking rallies in June and July that saw hundreds of thousands of people hit the streets.

The protests were sparked by opposition to a plan to allow extraditions to the mainland, but have since morphed into a wider call for democratic rights in the semi-autonomous city.

Millions of people have hit the streets while clashes have broken out between police and small groups of hardcore protesters.

Battles between police firing tear gas and rubber bullets — and hardcore protesters using rocks, Molotov cocktails and slingshots — have since become routine in an international finance hub once renowned for stability.

Beyond suspending the extradition bill, Beijing and city leader Carrie Lam have shown no desire to meet key demands such as an inquiry into police violence, the complete withdrawal of the bill and an amnesty.

But protesters remain unbowed, despite the arrests of more than 700 people and 11 consecutive weekends of rallies that have won few concessions.

Beijing has turned the screws on Hong Kong’s businesses, pressuring them to toe the line and condemn the protesters.

On Friday, Cathay Pacific announced the shock resignation of CEO Rupert Hogg after the carrier was excoriated by Beijing because some staff supported the pro-democracy protests.

On Saturday, the “Big Four” accountancy firms scrambled to distance themselves from a advert placed in a newspaper purportedly by employees saying they supported the protests.

Deloitte and PwC posted statements on their websites saying the ad does not represent their positions and expressing opposition to violent or illegal behavior.