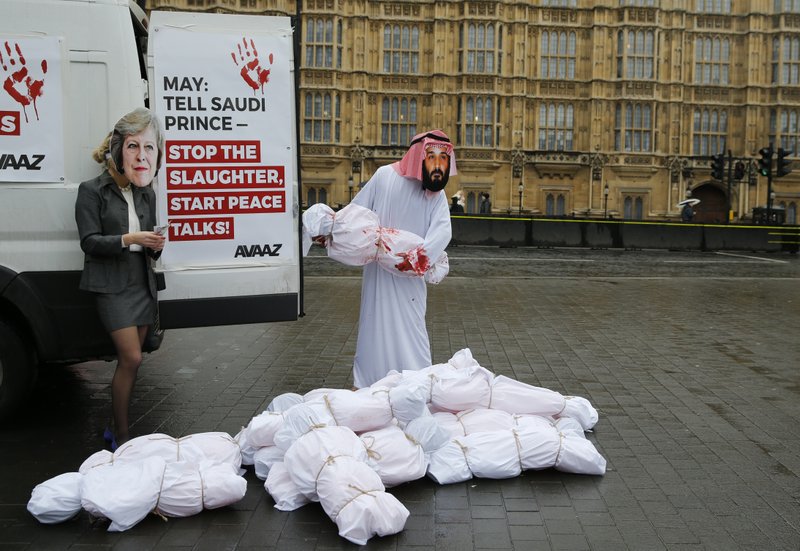 Saudi Arabia’s crown prince was being greeted by Queen Elizabeth II, and met by protesters against the war in Yemen, as he began a three-day visit to Britain on Wednesday.

Britain is rolling out the red carpet for Crown Prince Mohammed bin Salman, who will have lunch with the queen at Buckingham Palace and dine later with Prince Charles and Prince William.

He is also due to meet with Prime Minister Theresa May, who said she would raise concerns about human rights during talks at 10 Downing St.

Critics say Britain has been slow to condemn rights abuses by Saudi Arabia, a key regional ally and major purchaser of UK-made weapons.

A Saudi-led coalition has been battling Iran-allied rebels in Yemen since 2015 in a war that has killed more than 10,000 people and driven the Arab world’s poorest country to the brink of famine. The kingdom faces wide international criticism for its airstrikes killing civilians and striking markets, hospitals and other civilian targets.

Campaigners against the war rallied near Parliament and said they would protest later outside the gates of Downing St.

“The link that we have with Saudi Arabia is historic, it is an important one and it has saved the lives of potentially hundreds of people in this country,” May said in the House of Commons.

The crown prince has shaken up his deeply conservative country since he became heir apparent to King Salman last year.

The 32-year-old royal swiftly consolidated power by sidelining rivals and stepped up Saudi Arabia’s rivalry with Iran. He has also has pushed through a number of dramatic social reforms including allowing women to drive and lifting a ban on movie theaters.

The three-day visit is also due to include lunch with May on Thursday at the prime minister’s rural retreat, Chequers, and talks with Defense Secretary Gavin Williamson.