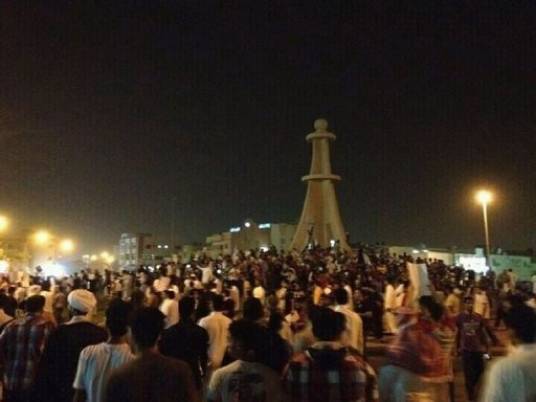 The first defendant was found guilty of joining three protests in the town of Awamiya, in the province's Shia Al-Qatif region, it said.

He was also found guilty of having "anti-kingdom and anti-rulers pictures on his mobile phone…and of knowing dissidents in Qatif and covering up their activities."

The second defendant, who was sentenced to nine years, was found guilty of taking part in "most demonstrations" in Qatif.

He was also convicted of "surfing dissident Internet websites, and posting statements inciting opposition to the rulers…as well as calling for the release of prisoners," SPA said.

The two defendants and the prosecution have decided to appeal the verdicts, it said.

There are an estimated two million Shias in the Sunni-ruled kingdom of around 27.5 million people.

Shia towns in the oil-rich Eastern Province have been rocked by sporadic violence as protesters clashed with police over what they say is the marginalisation of Shias.

The unrest first erupted after violence between Shia pilgrims and religious police in the Muslim holy city of Medina in February 2011.

The protests escalated when Saudi Arabia led a force of Gulf troops into neighbouring Bahrain the following month to help crush Shia-led pro-democracy demonstrations in the tiny Sunni-ruled Gulf kingdom.

Human rights groups say more than 600 people have been arrested in Saudi Arabia since the spring of 2011, most of them in Qatif. The majority have since been released.