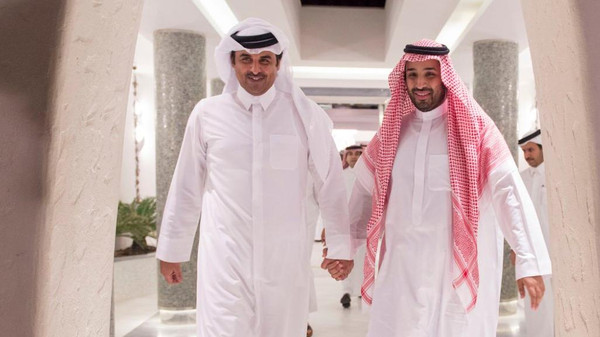 One hour after a mutual phone call between both the Emir of Qatar Tamim Bin Hamad and Saudi Arabia’s crown prince Mohamed Ben Salman that aimed at a reconciliation with Qatar, Saudi Arabia declared suspension of any further dialogue or communication with the Middle East country.

According to a statement released from the Saudi Foreign Affairs Ministry, the Saudi government decided on Saturday to suspend any communication as Qatar allegedly distorted the content of the call.

A high ranking official at the Saudi Foreign Affairs Ministry said in a statement that the Qatari official news agency has distorted the content of the phone call that took place between both Tamim and Ben Salman.

On Friday night, the Saudi official news agency said that Ben Salman has received a phone call from the Qatar’s Emir Tamim Ben Hamed in which he [Ben Hamed] expressed desire to open dialogue with the Arab four countries that are following diplomatic boycott with Qatar.

During the phone call, both the Saudi’s crown prince and Emir of Qatar agreed on sending two Qatari envoys to engage in dialogue with the Arab countries, to pave the way for reconciliation and end the diplomatic boycott adopted in May.

The Qatari’s narrative on the phone call between Ben Salman and Bin Hamed carried clear contradiction with the Saudi’s, as it asserted that the phone call took place following mediation from US President Donald Trump.

The agency said that the Emir of Qatar stressed that dialogue is the only solution to reach reconciliation, noting that the Qatari envoys would discuss the controversial issues with the Arab countries in a way that did not violate Qatar’s sovereignty.

On June, the Arab four countries of Saudi Arabia, UAE, Egypt and Bahrain declared a diplomatic boycott to Qatar and suspended all aviation, ground and naval lines, over charges of support to terrorists.

The Arab countries stressed that Qatar supports terrorist organizations and has relations with Iran that represent a threat to the Arab Gulf countries. Qatar has denied all these charges.