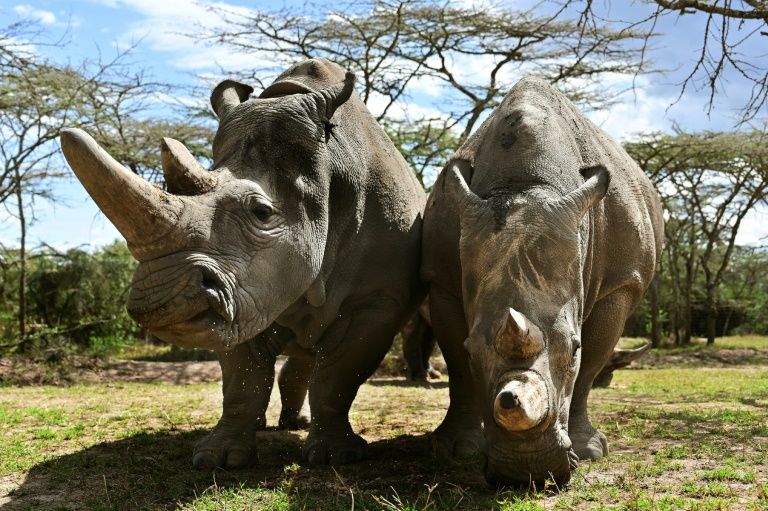 Veterinarians have successfully harvested eggs from the last two surviving northern white rhinos, taking them one step closer to bringing the species back from the brink of extinction, scientists said in Kenya on Friday.

Science is the only hope for the northern white rhino after the death last year of the last male, named Sudan, at the Ol Pejeta Conservancy in Kenya where the groundbreaking procedure was carried out Thursday.

Two females, Najin, 30, and daughter Fatu, 19, are the only survivors of the subspecies of white rhino, and live under 24-hour armed guard at Ol Pejeta.

However neither is able to carry a calf. Fatu has degenerative lesions in her uterus and Najin has weak hind legs which could cause complications if she fell pregnant.

The rhinos underwent a highly risky procedure carried out by a team of international vets, which saw them anaesthetised for almost two hours, and their eggs extracted using techniques that have taken years of research and development.

“It was a great success, yesterday ten oocytes were harvested which was about the number we hoped for” said Jan Stejskal, of the Dvur Kralove Zoo in Czech Republic, which in 2009 sent four northern white rhinos to Kenya in a bid to encourage them to breed.

He explained that after the discovery that the two females were infertile in 2014, over 15 European zoos had given the green light for their their southern white rhino females to undergo the newly-developed egg extraction technique.

In July 2018 the first-ever rhino embryos were created, a hybrid of southern and northern white rhino.

The oocytes from Najin and Fatu were airlifted to a laboratory in Italy, where they will be fertilised with cryogenically frozen sperm — of which there are samples from four deceased males — likely by the end of the week.

Now scientists have to develop a technique to transfer the embryos into a surrogate rhino. This has been attempted in southern white rhinos but has yet to be successful.

Then it is a race against time to extract as many more eggs as possible from the living northern white females.

“As scientists we are gaining so much results and information about reproduction biology and assisted reproduction that can and will help other species which are not so close to the verge of extinction as the northern white rhino,” said Frank Goritz, head veterinarian at the Leibnitz institute.

Richard Vigne, the managing director of Ol Pejeta, said efforts to revive the dying species were crucial to highlighting the “current crisis of extinction that we humans are responsible for.”

Wiped out by poaching

There are five rhino species remaining on earth, of which black and white rhinos are found in Africa. The northern white rhino is generally considered a subspecies of white rhino although some scientists believe it to be a sixth species.

Rhinos have few predators in the wild due to their size but have been devastated by poaching for their horns — used in traditional Chinese medicine.

Modern rhinos have plodded the earth for 26 million years. As recently as the mid-19th century there were more than one million in Africa. The western black rhino was declared extinct in 2011.

If the IVF is successful, scientists say there may be several births of northern white rhino calves, but the approach has its limits.

Eggs can only be collected from the females three times a year, and a lack of genetic diversity could hamper the survival of the species.

However the consortium of international scientists known as BioRescue is also trying to create artificial sex cells known as gametes via stem cell transformation from the frozen tissue of other, unrelated northern white rhinos, to diversify the gene pool.

It is hoped a revived population — which could take up to 70 years — could eventually be re-introduced into secure habitats in these areas.

“They lived in an area which really is not that safe right now, but there are some parts of their former range where they could be released,” said Stejskal, adding there was hope for some conflict-torn nations to eventually provide a secure habitat in decades to come.

Hell in high water: Braving the monsoon to save India's rhinos