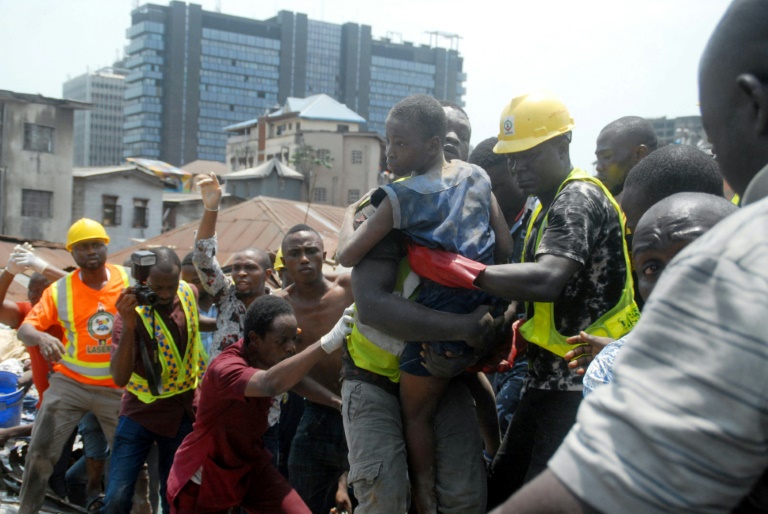 Emergency services on Thursday said they had called off the search for survivors of a building collapse that killed nine in Nigeria’s biggest city, Lagos, as anger mounted over dilapidated property and unscrupulous owners.

The building, which housed a primary school and nursery, came down without warning in the teeming Lagos Island area at mid-morning on Wednesday.

Firefighters and other emergency services worked through the night to find anyone still trapped. One body was recovered in the early hours, the National Emergency Management Agency (NEMA) said.

“We have gotten to ground zero,” added Kehinde Adebayo, spokesman for the Lagos State Emergency Management Agency. “The debris has been cleared.

“All those trapped have been evacuated and the rescue operation has ended,” he told AFP. Final casualty figures were still being compiled and would be announced later, he said.

NEMA has said that 37 people were rescued alive.

Lagos State governor Akinwunmi Ambode said the building had been earmarked for demolition and a nursery and primary school were being run illegally on one of its floors.

School bags, toys and clothes were among the piles of rubble as a bulldozer tried to clear a path through wreckage.

Shopworker Adeniyi Afolabi, who lives nearby, gave the name of the school as the Ohen Nursery and Primary, and said there were 144 pupils in attendance on Wednesday.

Another local, Zion Munachi, also confirmed the name and the number of pupils. But both said not all children were at the school because of sports activities.

Chaotic scenes of heavy lifting equipment and ambulances trying to pick their way through huge crowds and narrow streets gave way to anger on Thursday, as residents demanded answers.

Lagos Island is the historic heart of the metropolis, which is home to an estimated 20 million people, and also home to its central business district.

Building collapses are tragically common in the city and elsewhere in Nigeria, where building regulations are routinely flouted.

In September 2014, 116 people died — 84 of them South Africans — when a six-story guesthouse collapsed at the Lagos church complex of celebrity televangelist TB Joshua.

An inquiry found extra floors had been added without planning permission. Engineers responsible for the construction are currently on trial for manslaughter.

In 2016, at least 60 people were killed when the roof collapsed at a church in the southern city of Uyo.

Afolabi blamed the government for the state of repair of many buildings on Lagos Island, many of which have been listed for demolition.

Prominent Lagos builder and surveyor Alani Fasiu Amusa said the “unscrupulous activities” of some developers and property owners were to blame.

“Why would somebody convert a residential building to a school for instance? Most of the buildings in central Lagos are old and cannot pass the structural integrity test,” he told AFP.

“They were built many years ago with sub-standard materials and without the involvement of qualified building engineers.”

Many high-rise buildings being used for commercial purposes are not properly strengthened, making collapses more likely, he added.

“The government should be strict in enforcing its building codes and regulations,” he added.

“Landlords who convert residential buildings to commercial purposes should be sanctioned. All defective structures should be pulled down and the culprits brought to book to serve as deterrent to others.”

Nigeria votes for a new president after delay