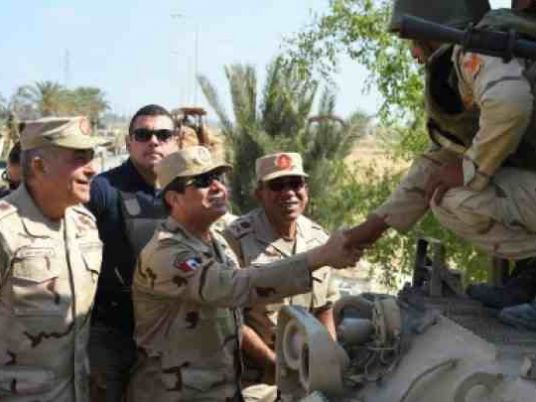 President Abdel Fattah al-Sisi said on Monday that the government is working with the military on a range of development projects aimed at raising the socio-economic condition of the Sinai peninsula.

“You do not have enough information about what is going on in Sinai. A year ago, I tasked Lt. Gen. Osama Askar, commander of the eastern troops, with LE10 billion for Sinai’s development,” the president told media host Amr Adib during a phone-in with Al-Youm satellite channel.

Sisi revealed a range of projects currently underway to lift the economic condition of the peninsula and provide job opportunities for the inhabitants, with a particular focus on young people and Bedouins. Among the projects he listed are new transport links and industrial and farming projects.

For several decades, Sinai has been suffering from a lack of government attention in terms of development projects and assistance. More recently, Egyptian authorities have made efforts to win over tribal communities in the peninsula, a mission deemed of key importance due to the ongoing Islamist insurgency there.

North Sinai has become a haven for Islamist militants, with hundreds of police and army personnel killed there since the ouster of the Muslim Brotherhood government in 2013.

According Sisi's statements, the government is seeking to simultaneously battle the insurgency with military firepower and tackle the socio-economic issues that contribute to the problem.

Some of the projects described by the president are linked to the Suez Canal Area Development Project, with its associated industrial zones, while others appear to be independent of the canal.

In the next two years, the Suez Canal governorates of Ismailia and Suez will each have two new motorway tunnels linking them to Sinai, said the president. A new railway line will be constructed in each of the provinces, which sit on the western flank of the peninsula.

“We are connecting Sinai to Egypt,” Sisi stated. “We are currently working on the East Port Said Harbour, which will be one of the biggest in the Middle East. So far, 600 fish farms have been established, and there will be 20,000 within a year,” said the president.

“Two thousand housing units have been finished in Arish. Three thousand more in Arish and 5,000 in South Sinai will be finished within a month. We are planning for 3,000 units to be constructed within a year or a year and a half,” said Sisi.

Within the coming two years, a planned network of roads will also be completed, which will help “add new regions in Sinai that can be reconstructed,” as the president put it.

The president also pointed out plans for 27 "Bedouin centers" in North and South Sinai that will be implemented within the coming two years. The centers, he explained, comprise housing units accompanied by farmland and wells.

Egypt’s military will also contribute to marble factories to provide young people with work and investment opportunities within a year or 18 months.