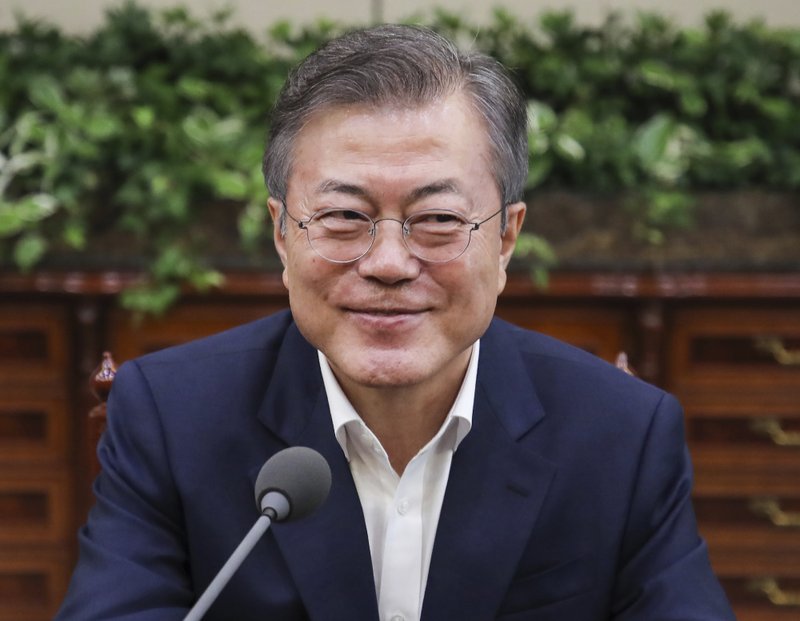 SEOUL, South Korea (AP) — South Korean President Moon Jae-in said Friday that he is pushing for “irrevocable progress” in efforts to rid North Korea of its nuclear weapons by the end of this year as he prepares for his third summit with North Korean leader Kim Jong Un.

Earlier this week, Moon sent special envoys to Pyongyang to help resolve the nuclear stalemate. After returning home, the envoys said Thursday that Kim still has faith in US President Donald Trump and reaffirmed his commitment to a nuclear-free Korean Peninsula, although he expressed frustration over skepticism about his sincerity.

Trump later responded by tweeting, “Kim Jong Un of North Korea proclaims ‘unwavering faith in President Trump.’ Thank you to Chairman Kim. We will get it done together!” Moon said the outcome of his envoys’ Pyongyang trip was “much more than what was expected.”

The next step in nuclear diplomacy is uncertain. Negotiators seem deadlocked over whether North Korea truly intends to denuclearize as it has pledged numerous times in recent months. North Korea has dismantled its nuclear and rocket engine testing sites, but US officials want more serious, concrete action taken before North Korea obtains outside concessions.

Kim told the South Korean envoys that he is willing to take stronger steps if his “goodwill” measures are met in kind, according to chief envoy Chung Eui-yong. Kim has repeatedly said he wants a step-by-step disarmament process in which each of his actions is reciprocated with corresponding outside concessions.

North Korea, which says its nuclear program is aimed at countering US military threats, has demanded the United States jointly declare an end to the 1950-53 Korean War, which was halted by an armistice, not a peace treaty. During his meeting with the South Korean envoys, Kim said an end-of-war declaration wouldn’t weaken the US-South Korean alliance or lead to the withdrawal of the 28,500 US troops stationed in South Korea to prevent an North Korean attack, according to Chung.

Moon’s liberal government, which is eager to continue engagement with North Korea, also wants the declaration. In a written interview released Friday with Indonesian newspaper Kompas, Moon said he wants to see such a declaration made this year as part of trust-building measures.

“What matters is implementing with sincerity the agreements among the leaders, and our objective is producing irrevocable progress by the end of this year,” Moon said, referring to denuclearization and a permanent peace on the Korean Peninsula.

During the Seoul envoys’ trip, the two sides agreed that Kim and Moon would meet in Pyongyang on Sept. 18-20, in their third summit since April. South Korean officials say the meeting will focus on how to achieve denuclearization of the Korean Peninsula.

Two senior members of South Korea’s delegation to Pyongyang are to fly to China and Japan to brief them on their meeting with Kim. Chung is to meet senior Chinese official Yang Jiechi on Saturday and National Intelligence Service director Suh Hoon, who went to Pyongyang with Chung, is to meet Japanese Prime Minister Shinzo Abe on Monday, according to South Korea’s presidential office.

Chung, whose official title is presidential national security director, spoke with his US counterpart, John Bolton, on the phone on Thursday about his trip to North Korea.

S. Korean envoy to travel to North for pre-summit talks