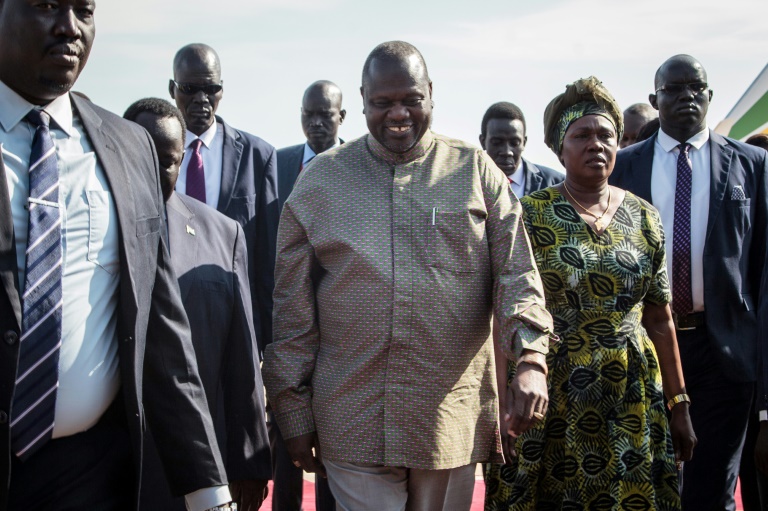 South Sudan rebel leader Riek Machar returned to the capital Juba for the first time in more than two years Wednesday for a ceremony to welcome the latest peace accord for the war-ravaged country.

Machar, who under the terms of the September deal is to be reinstated as vice president, had not set foot in the city since he fled in July 2016 under a hail of gunfire when an earlier peace agreement collapsed.

The latest deal aims to end a civil war that erupted in the world’s youngest country in December 2013 and uprooted about four million people — roughly a third of the population.

The two rivals then joined regional leaders at the ceremony to publicly welcome the most recent agreement, signed in the Ethiopian capital Addis Ababa.

UN Mission in South Sudan (UNMISS) chief David Shearer hailed the moment of cooperation and said that building trust would be crucial, according to a statement.

“To see parties that have previously been divided by violence coming together here in Juba, in a public sign of unity, sends a strong message to the citizens of this country that you are genuinely committed to end the suffering and build durable peace,” he said.

Several thousand people gathered for the ceremony at the John Garang Mausoleum, built in honour of the independence hero who was killed in a helicopter crash in 2005.

South Sudan gained independence from its northern neighbour Sudan in 2011 after a 22-year civil war pitting rebel groups against Khartoum.

“Sadly, the hopes and dreams of that moment were lost in the outbreak of the war that has plagued this country for five long years,” Shearer said.

“This ceremony is a chance for the leaders here today to restore that hope and to secure a peaceful and prosperous future for their people.”

The deal has encountered delays on several issues including the reactivation of a joint committee on borders and the number of regionals states.

It was not immediately clear how long Machar would remain in Juba, as his aides have expressed concerns over his safety in the city.

Lam Paul Gabriel, a spokesman for Machar’s SPLM-IO rebel group, had said on Tuesday that he would be accompanied by around 30 political figures.

“We are worried for his security in Juba, but the truth is here: we are for peace, and what we are trying to do is build trust. So that is why he is able to leave his forces behind and just go with politicians,” Gabriel said.

South Sudan’s civil war erupted when Kiir, a member of the Dinka tribe, accused his then deputy Machar, a Nuer, of plotting a coup.

The conflict split the country along ethnic lines and has seen mass rape, the forced recruitment of child soldiers and attacks on civilians.

It has caused one of the world’s greatest humanitarian crises and wrecked the economy in a country, which relies on oil production for the vast bulk of its revenues.

He first headed on foot to the Democratic Republic of Congo before finally going into exile in South Africa.

Several ceasefires and peace agreements have so far failed to end the fighting, which has killed an estimated 380,000 people, uprooted a third of the population, forced nearly two-and-a-half million into exile as refugees and triggered bouts of deadly famine.

Sudan earlier this month appointed a peace envoy to South Sudan following the signing of the September accord in Addis.

A year after US sanctions ended, Sudan's economy unravels