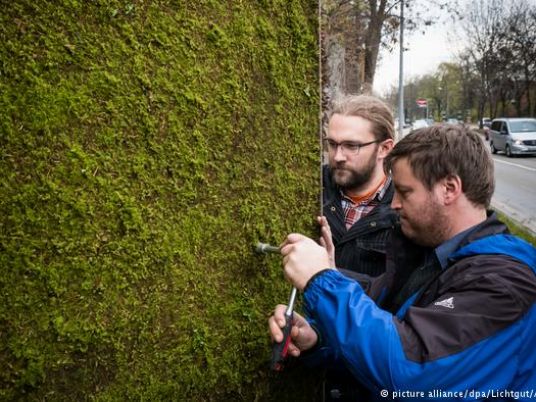 "Nitrogen dioxide has put our health at risk for decades." And for years, Maria Krautzberger, president of Germany's Federal Environment Agency (UBA) has pointed out the culprit: diesel car engines.

Krautzberger would like to see the polluters banned from city centers with the help of the so-called blue disc – a blue sticker on every car indicating the level of emissions of fine particulate matter. This environmental disc is very likely to come to German streets –  the question is when. The federal government is hesitant, but blue environmental zones are already being planned in most of the country's big cities: Berlin, Hamburg, Leipzig, Dresden and Munich. This is what the proposed blue disc could look like

Stuttgart, known as Germany's worst city for smog, exceeded the EU's designated safe levels of fine particulate matter in the air on 66 days in 2016. And it looks like its getting worse. The concentration of fine particulates in the air was higher than 50 micrograms per cubic meter on 30 days in the first two months of 2017 alone.

Concentrations higher than 40 micrograms per cubic meter are harmful to human health.  EU regulations set the limit at 50 micrograms. If the safe levels are exceeded on more than 35 days per year, the EU can impose heavy fines.

Air pollution in Stuttgart has become so bad that residents have sued the city's mayor Fritz Kuhn and district president Wolfgang Reimer; both politicians are members of the Green party. The administrative court has also demanded action from the state of Baden-Württemberg, of which Stuttgart is the capital, and asked them to deliver a plan on how the air quality could be sustainably improved.

The authorities tried "soft” appeals to the public and issued the first-ever air pollution alert in January, asking citizens to abstain from driving. The city even offered reduced prices for public transport. But the measures did not result in any improvement.

Since the voluntary measures didn't work, Stuttgart was forced to get tough. The government of Baden-Württemberg has decided to introduce a "no drive” zone for diesel vehicles emitting more than 80 milligrams of fine particulate matter per kilometer. From 2018, heavy polluters will be banned from entering the city during periods of high pollution.

Another attempt to improve air quality is the installation of a moss wall. Moss usually grows in mountain forests and moors. It storesf water and nutrients from rain and air – and can "eat up” air pollution. Pollutants cling to the sticky surface of the moss and are then, thanks to bacteria, converted into the biomass of the plant. In Stuttgart, a moss wall is currently being constructed which will be 100 meters long and three meters high. The two moss species (Ceratodon purpureus and Racomitrium canescens) used for the wall were specifically bred to filter and degrade fine particulate matter. Tests showed perfect results. Now it remains to be seen whether it will also clean the air of the smoggy streets of Stuttgart.