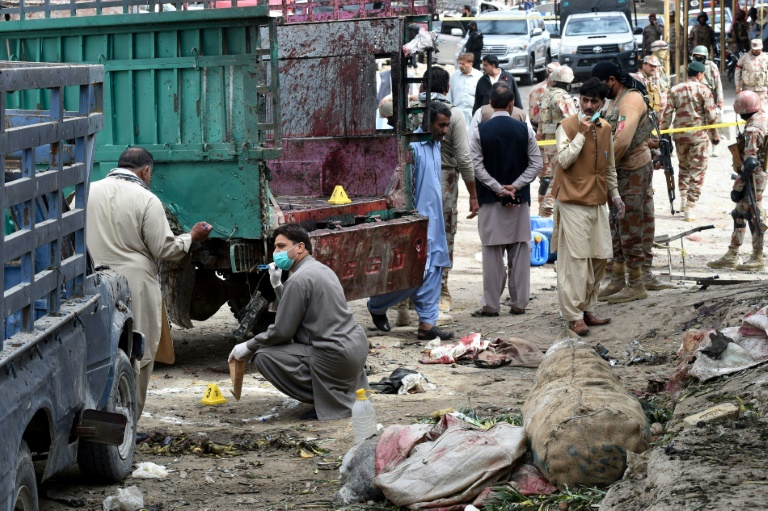 Body parts littered the scene and injured people screamed for help as black smoke cloaked the market after the explosion.

A faction of the Pakistani Taliban claimed the attack, which occurred in the capital of southwestern Balochistan province.

The group said it collaborated with Lashkar-e-Jhangvi (LeJ), which has been behind numerous bloody attacks on Shiite Muslims in Pakistan. There was no immediate confirmation from LeJ.

Balochistan — which borders Afghanistan and Iran — is Pakistan’s largest and poorest province, rife with ethnic, sectarian and separatist insurgencies.

Balochistan home minister Zia Ullah Langu gave the toll and confirmed it was a suicide blast, adding that two of the dead were children.

The Hazara, whose Central Asian features make them easily recognizable, are a soft target for Sunni militants, who consider them heretics.

They are so frequently targeted that they are forced to live in two protected enclaves in the city and are given a daily police escort to the market to stock up on supplies.

The bomb detonated near a site where produce was being loaded for distribution around the market.

“I was loading a small truck and I heard a huge bang and it seemed as if the earth beneath me had shaken and I fell down,” said Irfan Khan, a laborer, from his hospital bed.

He said the air was “filled with the stinging smell of burnt human flesh”.

Amnesty International said the blast was a “painful reminder” of the many attacks suffered by the Hazara community in Quetta over the years, and called for the government of Prime Minister Imran Khan to give them better protection.

“Each time, there are promises that more will be done to protect them, and each time those promises have failed to materialize,” wrote Omar Waraich, Amnesty’s deputy director for South Asia.

Violence in Pakistan has dropped significantly since the country’s deadliest-ever militant attack, an assault on a school in the northwestern city of Peshawar in 2014 that killed more than 150 people, most of them children.

Pakistan makes it easier to go after assets of militants