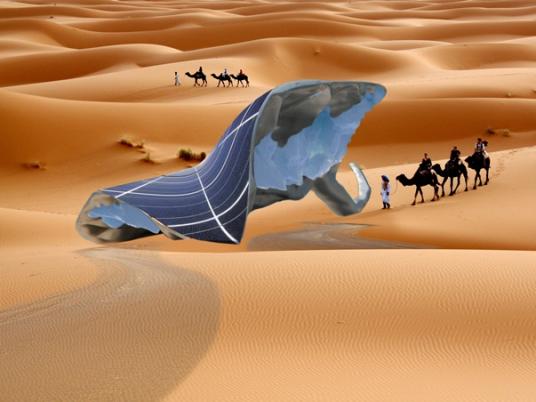 A Dutch artist intends to create a glacier in the Egyptian desert to inspire solar powered solutions to climate change.

Working from a climate controlled cube in The Hague in the Netherlands, Ap Verheggen and the company Cofely Refrigeration say they have completed tests that show it is possible to sustainably generate ice from desert water vapor.

They are now poised to begin engineering a 2,153 square foot (200 square meter) dune-spanning sculptural "leaf" dubbed the SunGlacier. Solar cells will power cooling condensers generating 20 square meters of ice in the shadow of the SunGlacier's underbelly.

“We are looking for a third party that is willing to help us bring this idea to realization,” Verheggen told Egypt Independent. Although any hot dry desert setting would do, the 48-year-old career artist wants the project to go to Egypt. He has his heart set on a site next to the pyramids of Giza.

“If we can find an Egyptian partner that would be the world’s best idea.”

Months earlier, in a climate controlled insulated chamber, Verheggen and his team had recreated the summertime conditions of Aswan in Upper Egypt. There the relative humidity is typically 22 percent and temperatures soar above 50C. An electric fan simulated desert winds. Despite the harsh conditions, they found that it took only a few minutes for ice to grow on an aluminum slab connected to a cooling machine. Eventually a 4-inch (10.16cm) thick layer of ice coated the slab.

By upscaling the laboratory design, the team has calculated that 200 square meters of solar panels would generate enough energy to produce at least 100kg of ice in the desert.

They have now embarked on building a 10-20 square meter scale model.

The key to appreciating how the SunGlacier works, says Verheggen, is to understand the difference between absolute and relative humidity. “If we look not to the relative but to the absolute figures, the Netherlands is drier than Egypt.”

While absolute humidity gives the amount of water vapor in the air, relative humidity is this amount divided by how much water the air could possibly carry. This carrying capacity changes with temperature. The hotter the air the less water it can hold. The upshot is that two atmospheres with differing relative humidifies may each be storing the same amount of water vapor.

The SunGlacier effectively taps this humidity like a domestic anti-humidifier.

“On our planet we live in an ocean of water vapor,” says Verheggen. “Even in the driest deserts. But you can’t see it. The ocean of water could be a solution for the future to solve water problems.”

Water shortages were the major topic of discussion at the World Water Forum. More than 40 percent of the world’s population will live in areas of severe “water-stress” by 2050, a recent OECD study on global water challenges predicted.

The SunGlacier is not meant to be a solution to the world’s water shortages, Verheggen says. “Our project is an art project. But with this art project we want to inspire people, organizations and industry. One of the most interesting projects is to make water with solar energy. Energy is normally stored in heat. Why not in cold? The project can give much inspiration for further research.”

“I am somebody who believes that with the conventional techniques available today, we can find solutions that we never could dream of before.”

The project has won support from the water training institute of the United Nations, UNESCO-IHE, for which Verheggen is a cultural ambassador.

Verheggen conceived the idea following a trip to the West Greenlands for the prequel to SunGlacier, the cool(E)motion art project.

In June 2009 the project — led by Verheggen — placed two large sculptures on icebergs in the bay of Uummannaq, West Greeland. An internet audience followed the GPS signals of devices attached to the sculptures as the icebergs sailed the Baffin Sea offshore West Greenland. The project had calculated that in typical conditions the icebergs would survive 3-4 years. But after only two months they vanished into the ‘warm' waters of Uummannaq bay. The GPS signal went silent.