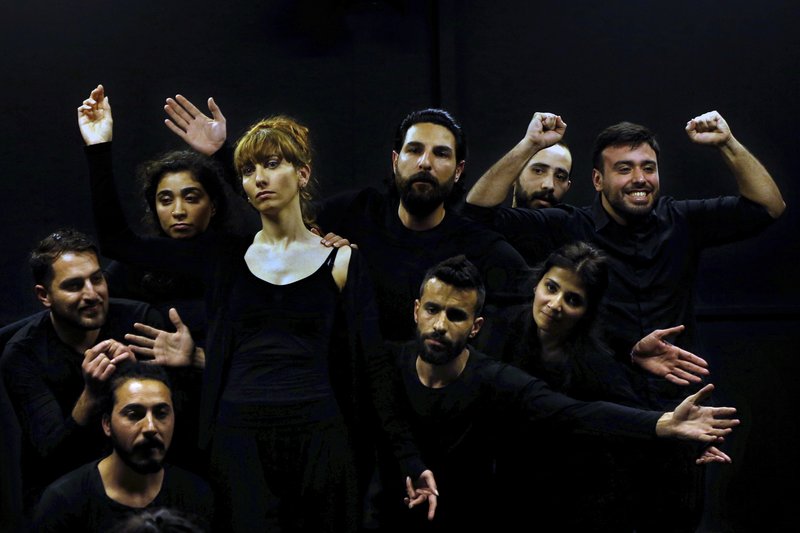 BEIRUT (AP) — The young Syrian woman walked on stage in a theater and began telling the story of her brother’s kidnapping in the early years of her country’s civil war, wiping away tears as she recalled the 2013 incident that changed her life.

The woman, who identified herself as Mae from a government stronghold in the central city of Homs, said Ihsan’s kidnapping in 2013 turned her into a more tolerant person, despite the eight-year conflict that has killed more than 400,000 people and displaced half the country’s population.

Inside the theater in the Lebanese capital of Beirut, Syrians from other parts of the country who support rival factions listened carefully to what she said.

Once she was done, 10 Syrian actors dressed in black began re-enacting what Mae had just said, one of them screaming, “Ihsan, I miss you a lot!” Another walked on stage and said, “No matter what our religion or ethnicity is, we are all Syrians.”

The group of seven men and three women has been training for three months to do “playback theater” during which members of the audience tell their stories and then see them re-enacted on stage — an initiative to get war victims to talk through their trauma, initiate dialogue and help forge reconciliation.

The training was organized by Fighters for Peace, which was founded in 2014 by former Lebanese militia members who took part in their country’s destructive 1975-90 civil war and are now peace activists. They have been using playback theater for years as part of their campaign to promote peace and try to prevent another breakout of war in Lebanon.

Despite the mostly friendly atmosphere in the hall on the on the top floor of a building in Beirut, tensions boiled over at one point, reflecting the bitterness and hate that nearly eight years of war has created in Syria.

Once they were done reacting, a young man in the audience stood up angrily and shouted at Mae, screaming that the government was to blame for everything that happened over the past years in Syria in a tone that showed he did not care about her brother’s fate.

“You are hurting me,” the woman replied, to which he responded, “I want to hurt you,” before he burst out of the theater.

Syria’s conflict began in March 2011 with largely peaceful protests against President Bashar Assad’s rule but eventually turned into an armed insurgency and civil war after a violent crackdown on the protest movement. It has occasionally spilled over to neighboring Lebanon, where the country’s population is divided between supporters of the Syrian government and others who support the opposition. Related fighting in Lebanon between rival groups in recent years has left dozens of people dead or wounded, mostly in the northern city of Tripoli.

“By reacting to what the members of the audience say, we are supporting them morally and helping them heal,” said Maher Sheikh Khodor, 28, a freelance photographer and graphic designer from Syria who has been living in Lebanon since 2014.

Khodor, who is from the central Syrian town of Salamiyeh and has been training in playback theater for months added that the work helped participants meet Syrians from other ethnicities and sects. “We are Syrians from all parts of Syria and all of its sects,” he said.

Another team member, Hassan Aqoul, 28, said the training “broke the ice between us.” Aqoul, who has been living in Lebanon since 2012, said those who trained them are experienced and a few days after the training started “we started feeling as if we have been friends for a long time.”

“They have good ideas. They were fighters and now reconciled and discovered that they were wrong,” he said.

Asaad Chaftari, a former commander with the Lebanese Christian right-wing militia, the Lebanese Forces, confessed and publicly apologized years ago for his role in atrocities committed during Lebanon’s civil war that killed 150,000 people. He is now an active member of Fighters for Peace and for years has been campaigning for peace.

“Violence leads to nowhere and this is what we discovered in Lebanon. That at the end, everybody will have to sit together and search for a new way to live in their country,” Chaftari said.