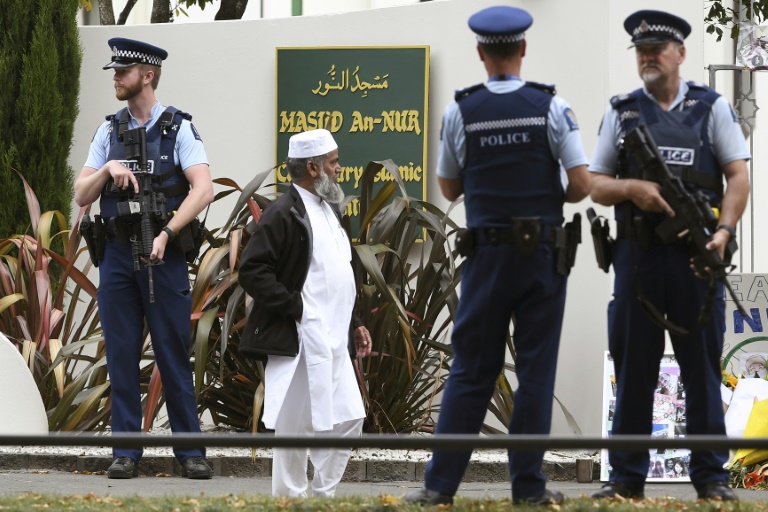 Muslims prayed at Christchurch’s main mosque on Saturday for the first time since a white supremacist massacred worshipers there as New Zealand sought to return to normality after the tragedy.

The Al Noor mosque was taken over by police for investigations and security reasons after alleged gunman Brenton Tarrant attacked Muslims gathered there and at a smaller mosque for Friday prayers on March 15, killing 50 people.

But Al Noor was handed back to the local Muslim community on Saturday and began allowing small groups onto its grounds around midday.

“We are allowing 15 people at a time, just to get some normality,” said Saiyad Hassen, a volunteer at Al Noor, adding that there was as yet no known plan to fully reopen.

Among the first to enter was Vohra Mohammad Huzef, who survived the bloodshed.

Huzef, a Christchurch civil engineer originally from India, said two of his roommates were killed and he managed to survive only by hiding under bodies.

“Everyone wants to get back in again to give praise and to catch up. This is the central point of our community.”

The attacks have shocked a country of 4.5 million known for its tolerance and prompted global horror, heightened by Tarrant’s cold-blooded live-streaming of the massacre.

New Zealand came to a standstill on Friday to mark one week since the massacre, with the Muslim call to prayer broadcast across the country followed by two minutes of silence for the dead.

A day earlier, the country outlawed the military-style rifles used in the assault with immediate effect.

Police confirmed they had also handed back the Linwood Mosque, the second killing zone several kilometers away, but no plans to allow visitors were announced.

An armed police presence will remain at both mosques, as well as others around New Zealand.

Workers have rushed to repair bullet-pocked walls and clean blood-spattered floors at the two mosques.

At Al Noor, the small groups of visitors removed their shoes and socks and knelt down at a garden tap to wash their feet and faces in ritual pre-prayer ablutions.

Some wept quietly as they made their way into the mosque, where bright sunlight streamed through windows and the air smelled of fresh paint. No bullet holes were seen.

Men and women then knelt down to pray on a grey padded carpet underlay taped to the floor, with the mosque’s rugs yet to be replaced.

The day before, Fouda had delivered an impassioned memorial service at a park next to the mosque that was broadcast nationwide, praising an “unbreakable” New Zealand for uniting in the tragedy’s wake.

Around 2,000 people gathered Saturday at the same park to join a “March for Love” procession through Christchurch.

Elsewhere in the city were signs of a return to normalcy, with children playing cricket near Al Noor and a previously scheduled 100-kilometre (62-mile) cycling race going ahead as planned.

New Zealand, which already has prosecuted two people for distributing the gruesome livestream video of the attack, has now also made it a crime to share the alleged killer’s “manifesto”, NZ media reported.

In the document, Tarrant says he carried out the killings in response to what he termed a Muslim “invasion” of Western countries.

“Others have referred to this publication as a ‘manifesto’, but I consider it a crude booklet that promotes murder and terrorism,” Chief Censor David Shanks was quoted as saying.

Broken-hearted but not broken: New Zealand prays together