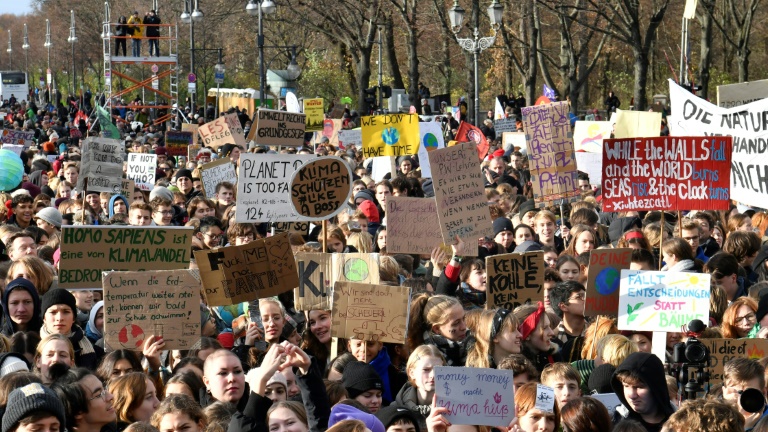 Tens of thousands of protesters, primarily in Europe and Asia, hit the streets on Friday to make a fresh call for action against global warming, hoping to raise pressure on world leaders days before a UN climate summit.

Carrying signs that read “One planet, one fight” and “The sea is rising, so must we”, thousands flocked to Berlin’s Brandenburg Gate for the latest “Fridays for Future” protest inspired by 16-year-old activist Greta Thunberg.

In total, about 630,000 people demonstrated across more than 500 cities in Germany, the Fridays for Future movement said.

In Hamburg alone, some 30,000 mainly young people gathered and another 17,000 congregated in Munich to voice alarm at rising temperatures, police said.

Thunberg, meanwhile, was on a boat sailing across the Atlantic, but tweeted a photo of herself holding a sign that said “School strike for climate.”

Rallies took place across Europe, although on a smaller scale than during September’s wave of “climate strikes” when organizers said some four million people filled city streets around the world.

Approximately 1,700 turned out in Madrid, the host city of next week’s 12-day COP25 conference, which aims to encourage governments to increase their commitments to cut emissions and combat climate change.

In France, climate activists focused their anger on the “Black Friday” sales bonanza with protesters blocking a distribution center of online retail giant Amazon outside Paris and others near Lyon and Lille.

Protesters in Paris also formed a human chain at La Defense shopping mall that prevented people from reaching stores, to highlight the climate costs of consumerism.

The Dutch branch of “Fridays for Future” said demos were taking place in around 15 cities, culminating in an evening march in Amsterdam where protesters would observe a moment’s silence for victims of the climate crisis.

Several hundred young people also took to the streets of Lisbon, where Thunberg is expected to arrive shortly before making her way to Madrid.

Turnout was low in the United States and Canada, with the protest taking place during the American Thanksgiving holiday weekend. A demonstration in Washington drew about 50 people, another in New York had 100.

“It’s important to keep showing up, keep being out there and talking to people about how this is not a problem that can go away, unless we address it head-on,” said 24-year-old Frank Fritz in Washington.

“We are trying to create an eco-responsible movement against mass consumption, so we are giving away clothes for free to encourage people to consume less,” protester Germain Desloges told AFP.

The latest round of global climate demonstrations kicked off in bushfire-ravaged Australia, where hundreds rallied outside the Sydney offices of the Liberal party.

The target of their ire was Prime Minister Scott Morrison, who said earlier this month the suggestion that “individual actions of Australia” had an impact on the fires “doesn’t bear up to credible scientific evidence”.

“Our government’s inaction on the climate crisis has supercharged bushfires,” said school strike leader Shiann Broderick, as Sydney was once again enveloped in toxic smoke from the fires.

Australia, with a population of almost 25 million, has low carbon emissions compared with the planet’s biggest polluters but is one of the world’s leading coal exporters.

“I feel a sense of crisis because almost no one in Japan is interested,” said 19-year-old student Mio Ishida.

“I was really inspired by Greta’s actions.”

In Delhi, about 50 school and college students marched to the environment ministry in the world’s most polluted capital, carrying placards and chanting slogans demanding that the government declare a climate emergency.

“This is about doing something that you believe in,” said 23-year-old Saumya Chowdhury. “We want the government to acknowledge this and have a conversation on this issue with people.”

India is one of the biggest sources of greenhouse gases and has 14 of the 15 most polluted cities in the world, according to a UN study.

Some 200 nations are meeting in the Spanish capital from Monday for talks on finalizing the “rulebook” for the 2015 Paris climate treaty, which becomes operational in 2021.

Scientists have warned that efforts to cap warming to 1.5 Celsius are failing and that carbon emissions — which are on the rise — would need to fall 7.6 percent a year to meet the target.

The United Nations has reported that greenhouse gas levels in the atmosphere, the main driver of climate change, hit a record high last year.

The UN has also warned that global temperatures are on track to rise almost four degrees Celsius by the end of the century, which could make some places virtually uninhabitable.

In US, climate anxiety churns up psychological storm