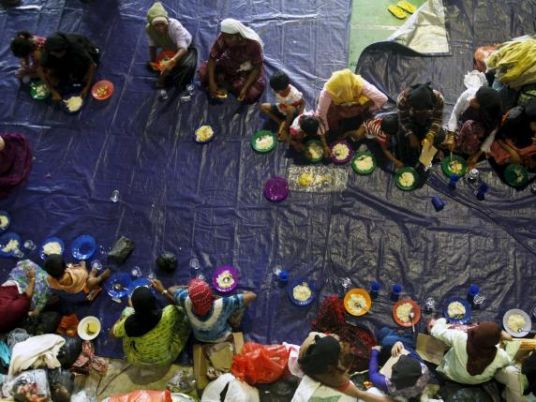 Thailand and Malaysia may set up camps and detention centers to shelter hundreds of refugees arriving on their shores, officials said on Tuesday, as a leading inter-governmental agency said about 7,000 boatpeople were still adrift in the Bay of Bengal.
There has been a surge in refugees arriving from impoverished Bangladesh and Myanmar to Malaysia and Indonesia following a crackdown on trafficking by Thailand, usually the first destination in the region's people-smuggling network.
Three boats carrying more than 1,000 people landed on the Malaysian resort island of Langkawi, close to the Thai border, at the weekend.
Malaysia, one of Southeast Asia's wealthier economies, has long been a magnet for illegal immigrants, but the sudden surge has presented the authorities there with a pressing problem.
"We have room at the detention center now, but if it is insufficient the ministry has the power to declare a new detention center," Wan Junaidi Tuanku Jaafar, the deputy interior minister, told Reuters.
"This is the first time there is such a big influx of people coming into the country. We were told that it was the result of borders set up by the Thai authorities, so we need to find that out as well, whether Malaysia was their final destination."
In Thailand, the Bangkok Post reported national police chief Somyot Pumpunmuang had proposed setting up official camps, although he conceded the plan might only attract more refugees.
The daily said that about 250 refugees have been found wandering around in the jungle-covered area of southern Thailand near the border with Malaysia over the past week, apparently people who were abandoned by smugglers.
An estimated 25,000 Bangladeshis and Rohingya Muslims from Myanmar boarded rickety smugglers' boats in the first three months of this year, twice as many in the same period of 2014, the UN refugee agency UNHCR has said.
Most landed in Thailand, where they are held by the smugglers in squalid jungle camps until relatives pay a ransom, but the crackdown by Thailand has left many out at sea.
"Up to 8,000 people are at sea, of which more than 1,000 have landed," International Organization for Migration (IOM) spokesman Joe Lowry said.
"We believe there are no more departures from the Bay of Bengal because of a crackdown by Thai authorities but those who are still at sea have been there for weeks or even months."
Thai Prime Minister Prayuth Chan-ocha ordered a clean-up of suspected traffickers' camps last week after 33 bodies, believed to be of migrants from Myanmar and Bangladesh, were found in shallow graves in the south, near the Malaysian border.
An IOM official estimated that around 300 people had died at sea in the first quarter of this year as a result of starvation, dehydration and abuse by boat crews. Others have died in camps run by the smugglers.
On Sunday, nearly 600 migrants thought to be Rohingya refugees and Bangladeshis were rescued from at least two overcrowded wooden boats stranded off Indonesia's Aceh province, believing they had landed in Malaysia, authorities said.
The boats were towed to shore by fishermen after running out of fuel. Among the refugees were nearly 100 women and dozens of children.
Cried constantly
Muhammad Husein, one of those who landed in Indonesia, said he and about 80 people from the Rohingya community left Myanmar on five small boats and came near Thai shores after two months at sea.
"As soon as we got close to Thailand we got arrested," he said. "I don't know if the people who arrested us were navy officials or sea patrols or traffickers. They were not wearing uniforms but they had guns."
Husein said the migrants were kept confined in the boats for the next 20 days and given only small amounts of food and water.
"We could see the land, we could see hills, but they would not let us off the boat," he said. "Many of us cried constantly but if we asked for water, we were beaten. They even beat the women."
Last week, he said, his group and many other migrants were transferred to a bigger vessel and left adrift on the high seas.
"We had to drink sea water and people just got sick. We kept looking for other boats. Finally (on Sunday) we saw lights that got brighter and brighter as we got closer. When we got close to land, some fishermen came and asked us where we were from. They called the (authorities) and we were told we are in Indonesia."
In Bangladesh, where the authorities are trying to stamp out the crisis at its source, police say they have arrested more than 100 people traffickers in recent months.
Police said a suspected human trafficker was killed in a gunfight with police close to the Myanmar border on Tuesday, a day after three people suspected of smuggling thousands out of the country were arrested in the same area.