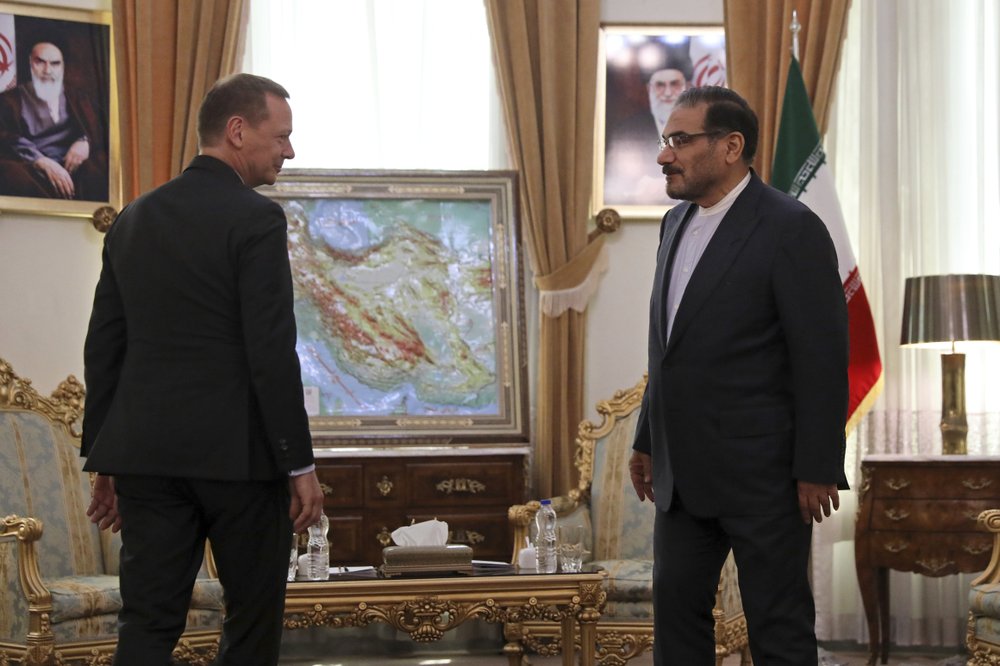 TEHRAN, Iran (AP) — The Latest on the tensions between the U.S. and Iran (all times local):

Iran says it’s prepared to return to “full implementation” of its landmark 2015 nuclear deal with world powers, but only when matched by the full compliance of “all participants.”

Iran has recently breached the deal’s limits on uranium enrichment, in an attempt to pressure European partners to find a way around sanctions imposed by the U.S. after it withdrew unilaterally from the pact last year.

Iran’s representative to international organizations in Vienna, Kazem Gharib Abadi, told a meeting of the International Atomic Energy Agency Wednesday U.S. actions were “neither legitimate nor legal” and should not be accepted by the international community.

He says that the “costly” consequences of American sanctions mean “they should be seen as weapons of warfare.”

The deal promised to lift sanctions in return for curbing Iran’s atomic program.

Iran’s President Hassan Rouhani has told France’s presidential envoy that Tehran has left the door open for diplomacy on the 2015 nuclear deal.

France and other countries have called on Iran to go back to complying with the nuclear deal after Tehran increased uranium enrichment beyond the limits set by the deal.

Rouhani’s website Wednesday quoted him as saying: “Iran has fully left the path open for diplomacy and negotiation.”

In a meeting with visiting envoy Emmanuel Bonne, Rouhani said Iran seeks “full implementation” of commitments by all sides of the deal. “If signatories to the deal implement their commitments, Iran also will take new steps.”

Earlier on Wednesday, Ali Shamkhani, a senior security official, told Bonne that the decision to increase enrichment is an “unchangeable strategy.”

President Donald Trump is threatening to ratchet up sanctions on Iran and again denounced the 2015 nuclear deal Iran signed with world powers.

Trump pulled the U.S. out of the deal, which offered sanctions relief if Tehran curbed its nuclear program.

Iran had been complying with the deal, but on Sunday increased its uranium enrichment beyond limits in the deal.

Iran’s Foreign Minister Javad Zarif is accusing Trump’s national security adviser John Bolton and the Israeli prime minister of killing the 2015 deal as well as one in 2005 that he says resulted in Iran increasing its enrichment. He says the Trump administration hasn’t learned.

Bolton sarcastically thanked Zarif for his “kind words,” and tweeted that someday he would explain to Zarif how to end a “bad deal.”

The United States is urging world powers party to the nuclear deal with Iran not to give in to Iran’s demands by providing new economic incentives to get it to backstep its recent escalation of its atomic program.

Jackie Wolcott, the U.S. ambassador to international organizations in Vienna, told a gathering of the International Atomic Energy Agency Wednesday that Iran’s recent moves to enrich uranium beyond the deal’s limits amounted to “nuclear extortion.”

She says Iran’s “misbehavior” should “not be rewarded.”

The U.S. pulled out of the 2015 nuclear deal unilaterally last year and re-imposed crippling sanctions.

The deal promised Iran sanctions relief in return for curbing its nuclear program.

Wolcott reiterated that Washington believes the deal was ineffective, but remains “open to negotiation without preconditions.”

Diplomats are gathering in Vienna for a special meeting of the board of the U.N. atomic watchdog requested by the United States to discuss Iran’s nuclear program.

U.S. and Iranian envoys to the International Atomic Energy Agency are expected to address the group Wednesday.

The U.S. called for the meeting after Iran announced last week that it had exceeded the amount of low-enriched uranium it is allowed to stockpile under the 2015 nuclear deal with world powers. Since then, it also announced it has started enriching uranium past the 3.67% purity allowed, to 4.5%. The IAEA has verified both developments.

Iran says it is justified in breaching the limits because the U.S. withdrew from the agreement last year and imposed sweeping sanctions. The other parties to the deal — Russia, China, Germany, France, Britain and the European Union — have called for Iran to stick to its commitments.

Iran says it will not reverse its decision to increase uranium enrichment beyond the limits set by the 2015 nuclear accord with world powers until it achieves its “full rights” under the deal, which U.S. President Donald Trump abandoned last year.

The official IRNA news agency quotes Ali Shamkhani, a senior security official, as telling a French envoy Wednesday that the decision to increase enrichment is an “unchangeable strategy.” Shamkhani goes on to criticize European countries for their “lack of will” in providing relief from U.S. sanctions.

France and other countries have called on Iran to go back to complying with the nuclear deal.

Iran’s president says Britain will face “repercussions” over the seizure of Iranian supertanker.

Hassan Rouhani was quoted by the official IRNA news agency Wednesday as calling the seizure “mean and wrong” during a Cabinet meeting. He warns London: “You are an initiator of insecurity and you will understand its repercussions,” without elaborating.

Last week, authorities in Gibraltar intercepted an Iranian supertanker that was believed to be breaching European Union sanctions by carrying a shipment of Tehran’s crude oil to war-ravaged Syria.

The tanker’s detention comes at a particularly sensitive time as tensions between the U.S. and Iran grow over the unraveling of a 2015 nuclear deal, which President Donald Trump withdrew from last year.

Iran open to diplomacy to save deal, but has ‘no hope’