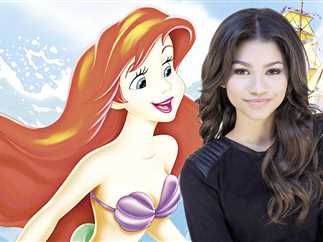 Riding the wave of recent great success in adapting a number of animated films to the feature film format with Aladdin still standing as the latest successful film in this trend, Hollywood is preparing to re-introduce the famous film The Little Mermaid in a feature film starring singer

Disney recently announced the re-introduction of the film, which will be directed by Rob Marshall, who chose Halle after many trials, negotiations and interviews with her and other actors.

The shooting is scheduled to begin soon.

Marshall said in an official statement that Bailey is the most suitable actor to present the character and that she will carry out a unique blend of acting and singing as she has a talent for acting and a wonderful voice. The movie will include the songs from the animated version.

The animated movie, which was screened in 1989, garnered US$233 million and cost US$40 million.

The character Ariel in the animated film, the mermaid daughter of King Triton who falls in love with a human, was characterized by green clothing and corrugated red hair.

Recently, Hollywood has reintroduced a number of animated movies as feature films including Aladdin, which still maintains a top position on the world’s highest-grossing film list–earning close to a billion dollars so far–starring Will Smith and Mena Massoud.

The Lion King musical drama film is scheduled to be screened soon in cinemas, directed by John Favreau. The scene of the movie is the African Savannah where Simba, the son of Mufasa and the Prince of the Pride Lands, is exiled by his uncle Scar, who killed his father.