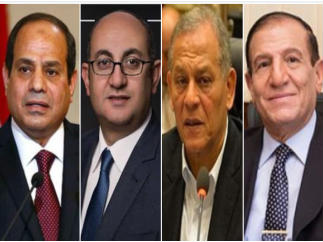 As Egypt’s presidential elections are approaching, it is worth exploring how Egyptian media have dealt with the candidates who up until now have announced their intention to run.

While some candidates have remained in the race, others have either been disqualified or dropped out. Some have received harsh media criticism over their legal status, leading them to be prevented from running, while others have been positively portrayed.

Egypt Independent presents a brief report on how some of the presidential hopefuls have been treated in Egyptian media.

Current President Abdel Fattah al-Sisi has announced that he will run for a second term in office. In order to be qualified to run in the presidential race, candidates must submit the required paperwork to the National Elections Authority.

On his part, Sami Anan, who was disqualified from running after he had announced his intention to participate in the race, has been bashed by the media. Executive editor of Youm7 Dandrway El-Hawary recently wrote an opinion piece entitled “Sami Anan: candidate of the Muslim Brotherhood,” in an apparent attempt to discredit the candidate.

Anan was arrested one day after a phone interview took place between a military expert and the well-known TV anchor Amr Adib in his talk show “Kol Youm” broadcasted through the privately-run TV channel of On-TV in which the expert hinted that Anan will not stay as a presidential candidate and that he will be subjected to investigation over violating military rules.

Another presidential hopeful, human rights lawyer Khaled Ali, who declared his withdrawal from the elections, has not been exempted from criticism of the pro-government media.

With expressing his intention to run in the elections, Ali became a target of critique from a number of media outlets such as the state-run newspaper of Al-Gomhuria that denounced Ali’s campaign.

Through a full-page op-ed by the editor in chief entitled “Khaled Ali and Midget’s Play,” the newspaper described Ali as a show-off secretly funded by the EU and a person who is obsessed with authority.

Similarly, former Prime Minister and presidential hopeful Ahmed Shafiq also faced criticism from local media after he declared his intention to be a presidential candidate in the 2018 presidential elections.

Through a talk show broadcasted on the privately–run TV channel El-Mehwar, TV anchor Sayed Ali said Shafiq was not the appropriate man to lead Egypt, instead describing Sisi as a respected man who saved Egypt.

Meanwhile, the TV anchor Lamis El-Hadidi on her talk show on privately-run TV channel CBC said that Shafiq is accused of corruption and that he is in open communication with the Qatar-based news channel of Al-Jazeera.

Shafiq later retracted his intention to run, saying he had not fully thought through his bid for the presidency.

The upcoming elections, set for March 26-28, will likely see Egyptian media outlets becoming an arena for the battle between the only two candidates that are running, namely President Sisi and al-Ghad Party head Mousa Mustafa Mousa.