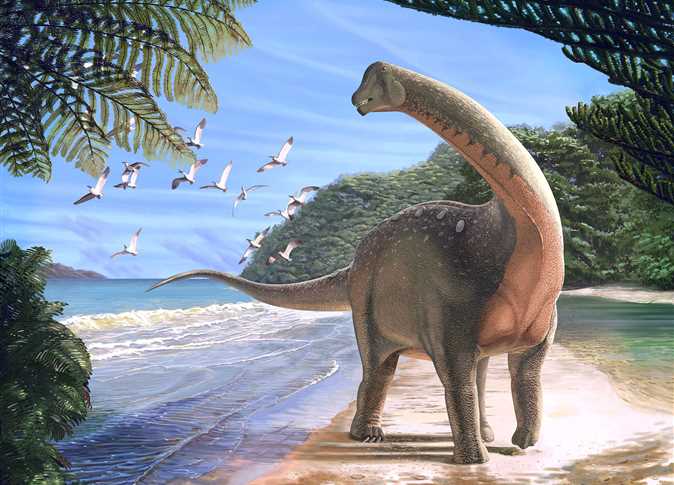 Time: About 100 million years ago, the Western Desert was one of the most fertile areas in the world. In that era, geologically known as the Cretaceous Period, the marshes of fresh water spread along the length and width of the Egyptian desert. Trees were lush greenery, to bring life to large groups of organisms including dinosaurs.

At that time, dinosaurs were grazing in the valleys that permeated the marshes, including the herbivorous dinosaurs, and the carnivorous, whose existence spanned 165 million years, then became extinct due to unknown circumstances. The dream of uncovering the cause of extinction has dominated the imagination of scientists. To achieve the equation of access to reality, scientists reveal to us from time to time about the skeletons of dinosaurs in an attempt to study their life conditions, and thus deduce the mystery of its extinction.

Now, a joint Egyptian-American team has developed a new piece in the puzzle revealing the mystery of the great extinction of dinosaurs at the end of the Cretaceous era some 65 million years ago, after they discovered a new dinosaur they named Mansourasaurus after Mansoura University, where the main researcher, palaeontologist Hesham Sallam, comes from. Sallam led the study.

According to a study published Monday in the renowned scientific journal Nature, one of the most important scientific journals in the world, the team was able to detect a completely new type of dinosaur in a unique scientific victory that would add much to Egypt’s fossil record.

When it comes to the last years of dinosaur life, the African continent is a blank page. The fossils found in Africa are only 90 to 100 million years old. There are few fossils and are far from the extinction period by more than 25 million years. The evolution of dinosaurs in Africa has been largely a mystery.

But now, the discovery of the research team – Mansoura University, in cooperation with Ohio University, the Leakey Foundation, the National Geographic Society, and the National Science Foundation – to the new dinosaur will now fill a gap that could contribute to resolving the dinosaurs’ mystery.

The new dinosaur was found in the Dakhla Oasis during an exploratory trip by researchers from Mansoura University Vertebrate Paleontology Center (MUVP), headed Sallam, who obtained his degree in vertebrate palaeontology from the University of Oxford, in collaboration with a female research team composed of Iman El-Dawoudi, Sanaa El-Sayed, and Sara Saber from Mansoura and Assiut universities.

The newly discovered dinosaur belongs to a group called Titanosauria, a type of long-necked herbivore dinosaur that were common all over the world during the Cretaceous Period. This family is known to be the largest wild animal known to date, but the newly discovered dinosaur is different in many characteristics. Its weight is roughly equivalent to the weight of an African elephant, and its structure is different from that of the Titanosauria group.

In 2008, the scientific team began to develop a plan for the search for dinosaurs in the sedimentary layers of Egypt, south in the Western Desert. Five years later, the team discovered Mansourasaurus in the Dakhla oases. About 700 km southwest of Cairo, the team found the bones of that dinosaur.

According to Iman El-Dawoudi, the research team investigated the intermediate period, which its sedimentary layers revealed by weathering and erosion. “The earth is made up of a group of layers, the older layer under the newer layer, the weathering and erosion factors reveal these layers, the geologists determine their age, and we dig them,” said Dawoudi in statements to Al-Masry A-Youm. She added that the team used “The geology of Egypt,” book of the late scientist Rushdi Said as a starting point for the search for sedimentary layers belonging to the late Cretaceous Period.

After the scientific team identified the stratum in question — a stratum belonging to the Late Cretaceous Period between 70 and 80 million years ago — they divided the regions and began work, until they were able to find the first bone in the Dakhla Oasis road in December 2013. The team returned to Mansoura University and collected the equipment, and in February 2014 the team returned to the site and set up the tents. During the 21 days spent by the research team in the desert, they extracted a group of bones for the same dinosaur.

After filming the site and bones, the team returned to the university, and used a foreign scientific team to make scientific discussions about the nature and type of the discovery, and they were surprised; as the bones found by the team belongs to a completely new type of dinosaur.

At this point, the team knew that the scientific discovery will resonate in the scientific community. The team began to conduct extensive studies on the newly discovered dinosaur and to search for a name for it. It eventually became known and named as Mansourasaurus after Mansoura University, which led the discovery and bore the bulk of the cost of funding the mission.

After search and investigations, the Egyptian-American team found a link between Mansourasaurus and one of the European dinosaurs, and this was the second surprise. A link between the two dinosaurs meant a relationship, and the possibility of a bridge between the African and European continents that linked them in ancient eras.

Millions of years ago Europe and Asia were in a single landmass, called Eurasia, while Africa and America were one continent separated by a sea called Tethyes, the forefather of the sea now known as the Mediterranean Sea. According to scientists, there was no land link between the northern bloc of Asia and Europe with the southern bloc which Africa was  part of. But now the dinosaur discovered by the Egyptian team may reveal a “land bridge” between Europe and Africa, through which this type of dinosaurs crossed to have a divided evolutionary path forming two very similar types: the first in Europe and the second in Africa.

According to Iman El-Dawoudi, the new discovery confirms the connection between Europe and Africa about 70 million years ago. She noted that the point of connection is unknown until now, but may be detected in the near future. “This point may be related to protrusions in the Mediterranean region, whose beaches were reaching those days to the borders of the oases of Dakhla and Al-Kharja,” she said.

Head researcher and palaeontologist Hesham Sallam, who led the study, says that he is very proud of his team. “It is the first team of its kind in Africa and the Arab world specifically specialized in vertebrate palaeontology,” he said.

Matthew C. Lamanna, palaeontologist at the Carnegie Museum of Natural History, said that “When I first saw pics of the fossils, my jaw hit the floor. This was the Holy Grail — a well-preserved dinosaur from the end of the Age of Dinosaurs in Africa — that we palaeontologists had been searching for for a long, long time.”

Eric Gorscak, a postdoctoral research scientist at The Field Museum and a contributing author on the study says that since so little is known about African dinosaurs, Mansourasaurus is better likened to an earlier step in the puzzle-solving process. “It’s like finding an edge piece that you use to help figure out what the picture is, that you can build from. Maybe even a corner piece.”

“What about after the discovery?” Al-Masry Al-Youm asked Dr. Hesham Sallam, who said that he wishes to continue exploring the desert to detect dinosaurs and to obtain the appropriate support, both financially and intellectually. He wishes to discover the Egyptian Spinosaurus dinosaur, which lived about 90 million years ago in Western Desert and North Africa.

Sallam aspires that his team be the basis for the Egyptian teams involved in the study of vertebrate paleontology. “Abroad there is a kind of tourism based on those fossils,” he said.

The discoveries of this kind pave the way for us to know about our ancient past, Sallam says, and believes that the past is a relevant part of the present moment, and that knowing about it may mean predicting the future. When we know for example how dinosaurs disappeared we will try to avoid the factors that led to its extinction, and thus bring safety to mankind in the future — knowledge of the past is the best way to defend the future, Sallam explained.

Some facts about the discovery:

6: The number of trips by the Egyptian team until the discovery

21: The number of days the extraction took

Mansourasaurus is about two metres in height.

Strongest dinosaur ever, Tyrannosaurus rex., could bite with the force of three cars

Why Republicans who once fought budget debt now embrace it