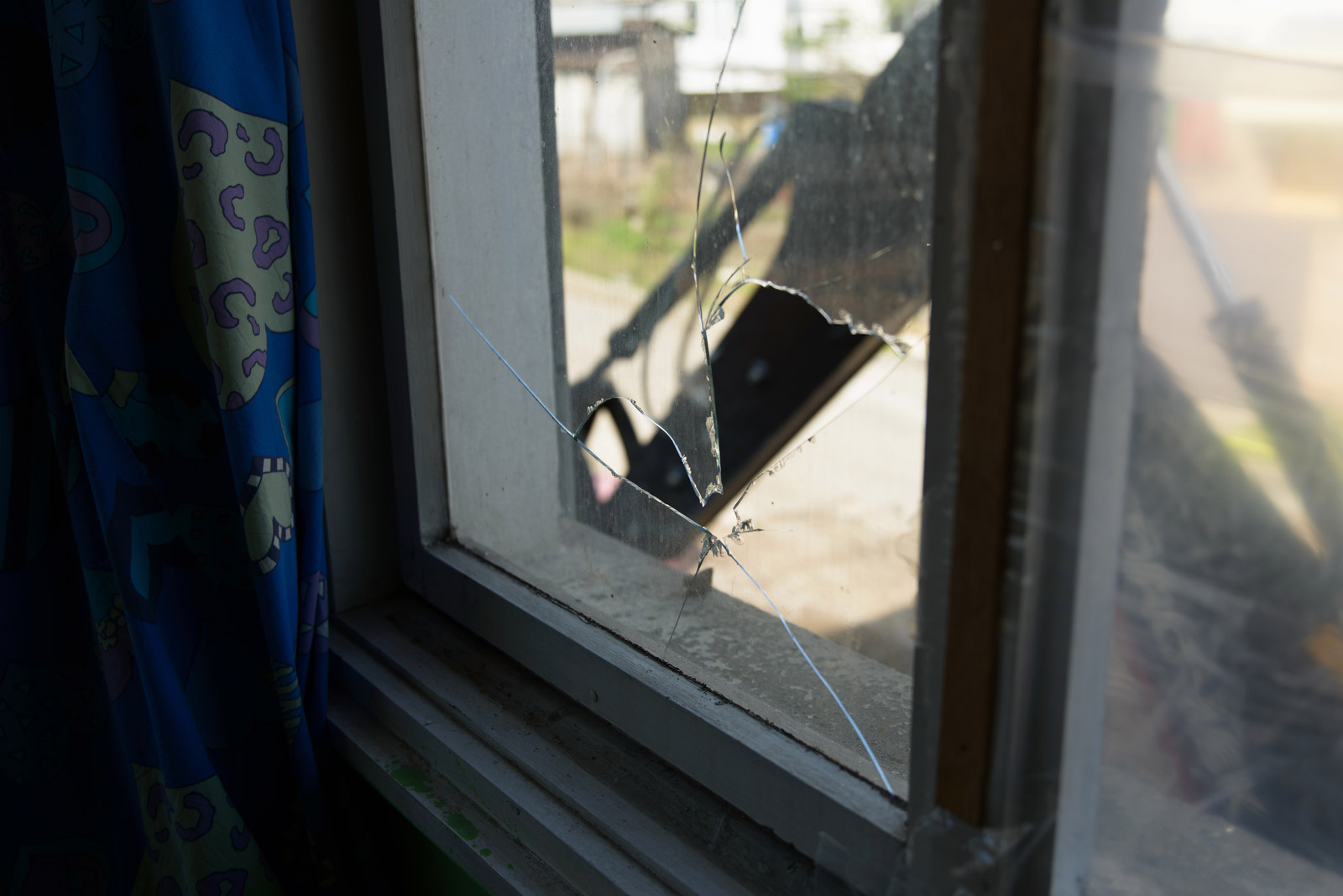 Gabrovo, Bulgaria — When rocks crashed through the windows of their home, the bathroom seemed the safest place to hide. Huddled together, the family of Vasil Velichkow Hristov — including his six young grandchildren — listened as an angry mob chanted threats and racial slurs.

“Come out, Roma, we’ll make soap out of you,” they yelled, according to several people who were nearby at the time.

Once a positive example of integration of the ethnic Roma community in Bulgaria, the northern central city of Gabrovo has been engulfed by racist violence and anti-Roma protests since April 10.

For four consecutive nights ethnic Bulgarians, some armed with metal batons, took to the cobblestone streets to demand that Gabrovo be cleansed of its Roma community. They smashed windows, threatened to kill the Roma, and set their homes on fire, burning to the ground their belongings and leaving the lives they had built here in ruins.

Standing in front of the burnt-out shell of the home he built five years ago, Krasimir Mitev gestured to the clothes he was wearing. They were everything he had left. Walking through the house’s charred interior, he pointed to the places where his bed, his table and his TV had stood just days before.

Instead of providing police protection, the authorities instructed the Roma to flee, according to several members of the community and Roma rights activists.

Ivan Todorov, a regional coordinator for Roma rights NGO Amalipe, estimates that around 80 percent of Gabrovo’s roughly 600 Roma complied. How many have or might still return is uncertain — some, he says, are just too afraid to come back.

Bulgaria is the poorest member of the EU, and home to one of the continent’s largest Roma populations. Although the Council of Europe estimates that Roma make up more than 10 percent of Bulgaria’s population — about 750,000 people — they are so marginalized and disenfranchised that less than half of them chose to self-identify as Roma during the last census.

The country’s politicians, media and general population have long used the ethnic minority as a punching bag for social and economic issues. But recently, their situation has worsened, experts say.

Rising nationalism and populism have driven Bulgaria’s Roma farther to the fringes of society, with some politicians neglecting to protect their access and right to housing, safety and education.

Lawmakers are using anti-Roma sentiment and rhetoric to mobilize voters ahead of European Parliament elections later this month and municipal elections later in the year, says Daniela Mihaylova, legal director of NGO Equal Opportunities Initiative Association, who has spent her career working for equal rights for the Roma minority.

While the Roma frequently face belligerent hatred and discrimination, “it is even worse before elections,” Mihaylova told CNN in her office in Sofia, “because it is so easy to catch the average Bulgarian with this topic.”

The recent protests in Gabrovo were triggered by widely circulated surveillance footage showing men identified as Roma allegedly instigating a fight at a late-night convenience store.

“I didn’t think that the incident would reach such a wide public,” Venzislav Borislavov Ivanov, an employee who says he was pulled into the fight, told CNN days later as he sat down to breakfast with his daughter. “The problems with the Roma have piled up over the last years, and after people saw the video, it escalated.”

Online and in the media, outrage over the fight ensued, with the Roma portrayed as violent thugs who were threatening the safety of the entire city.

The wife of Tomislav Donchev, the deputy prime minister who is in charge of Roma integration, said on Facebook that the residents of Gabrovo wanted to live in a city “cleansed of gypsies” without having to fear being “attacked by drunken or drugged gypsies.”

During a visit to Gabrovo, interior minister Mladen Marinov told CNN he had just installed a new police chief in the city to help solve the “communication issues” which had led to this “conflict.” He said all citizens needed to abide by the law and added that some of the Roma had lived in their homes illegally.

“We do everything in our power to not have vigilantism, and for civil peace to rule,” he said, adding that at least three men who had set Roma houses on fire had been charged, as have the three ethnic Roma involved in the store fight.

Marinov also categorically denied that anyone had incited violence against the Roma. “This isn’t an issue to play around with — it could start a fire that can’t be extinguished,” he said, adding that any politician who “sows hatred” could face legal consequences.

The only Bulgarian politician ever charged in connection with hate speech against the Roma was former deputy prime minister Valeri Simeonov, who referred to members of the community as “arrogant, presumptuous and ferocious humanoids.” Despite the comments, he remained in government — and was even appointed head of a national council responsible for the integration of Roma and Turkish people in Bulgaria. He was convicted, but later acquitted by a higher court.

While failing to call out Bulgaria specifically, in a statement to mark International Roma Day this year, the European Commission warned that “antigypsyism” was on the rise, and criticized extreme speeches and the spread of hate speech and fake news, including from politicians.

In January, a fight between Roma men and an ethnic Bulgarian soldier led to similar anti-Roma protests in the village of Voyvodinovo. Dozens of Roma families fled their homes. At a press conference addressing the incident, deputy prime minister Krasimir Karakachanov said that “gypsies … have grown exceedingly insolent.”

Such racist, inflammatory statements against the Roma community have gradually become normalized in Bulgaria, says Alexey Pamporov, an associate professor at the Bulgarian Academy of Sciences, who has researched hate speech against Roma.

“Always before the elections — especially if the rating of the right and conservative parties has fallen or is low — a ‘conflict’ arises on the basis of a domestic incident that is ‘ridden’ by a right-wing leader,” Pamporov says.

The only time Roma weren’t the punching bag, he says, was between 2012 and 2013, when hatred and aggression were targeted at Syrian refugees instead.

While about a dozen people gathered in support of peace and Bulgarian unity in front of the mayor’s office last week, the vast majority of people CNN spoke to seemed to agree that any Roma who lived in housing that lacked proper permits or wasn’t officially registered as a resident of Gabrovo ought to leave the city.

Roma representatives say only a small group within the community lacked such documents and pointed to institutional discrimination that often made it impossible to obtain them.

Shortly after he was installed as Gabrovo’s new police chief, Borislav Muerov told CNN in mid-April that he would coordinate with the municipality to evict Roma who were not properly registered.

CNN reached out to the municipal council in Gabrovo for comment about the anti-Roma violence, but did not receive a response to our questions.

“We’ve made one step forward,” Todorov of NGO Amalipe, who has worked for decades to desegregate Gabrovo’s schools, “but with this incident, it’s been 10 steps back.”

Todorov worries how many families might never return to Gabrovo, how many of their children will never have an opportunity to learn to read and write alongside their Bulgarian peers, and how many of those who do come back to the city might be evicted in the future.

Mitev has returned to rebuild his home, and Hristov’s family, too, decided to come back to Gabrovo. When CNN visited them, they had boarded up the broken windows on the ground floor of the house and covered those upstairs with plastic sheets. The children were still in shock, Hristov said. A neighbor chimed in, saying that his children were too traumatized to return to school.

As they spoke, an excavator worked to tear down a small shed the family had built to store clothes and food supplies. Dust from the rubble thrown up by the demolition work blew in their faces.

Inside his simple, neat home, Hristov showed his lease agreement and documents confirming that he was born in Gabrovo and has lived here his entire life. Framed family photos hung on the walls, commemorating marriages and the birth of children and grandchildren, just as they would in any Bulgarian home.

“We’ve never had any problems with the Bulgarians,” he said. “Why do they want us to leave?”

Romanian carers in Italy: 'I miss my family so, so much'