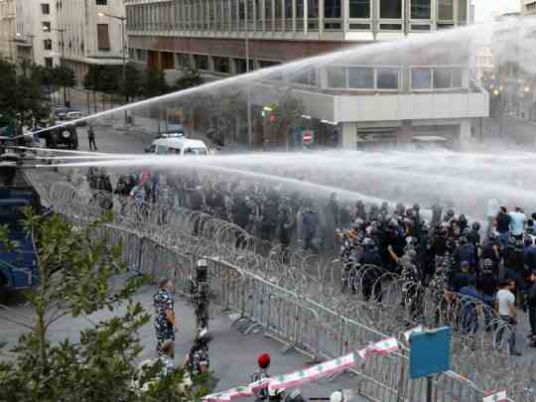 Lebanese police fired tear gas and water cannon and shot in the air to try to disperse thousands of protesters in Beirut calling on the government to step down for mishandling a dispute which left rubbish uncollected in the streets for weeks.
Police and security forces cordoned off the centre of the capital, around the parliament and government buildings, to thwart the biggest protest in recent months against authorities.
Police said 35 people, including protesters and police, were injured.
“The people want the overthrow of the regime,” said protesters using the famous chants made by Arab protesters during the height of popular protests that swept the region after 2011 and toppled several longstanding rulers.
Last month the country was left with mounting piles of rubbish after politicians, divided by regional and local conflict, were unable to agree where to dump the capital’s refuse.
The crisis was temporarily resolved when the rubbish was finally cleared but bickering within the government over which company to award the new contract has exposed it to allegations of corruption from opponents.
The interior ministry said it had ordered the release of protesters detained during the clashes, which saw youths hurling rocks at police during the attempt to storm a heavily protected security zone around the Saraya palace, the seat of government.
Prime Minister Tammam Salam was due to hold a news conference on Sunday to address the crisis that some politicians warned could threaten to bring down his national unity government that has maintained a semblance of central authority and helped to contain sectarian tensions.
Some politicians within the government opposed to Salam have blamed what they describe as “excessive use of force” by security forces against peaceful protests organised by civil campaigners and activists for provoking clashes.
The crisis echoes wider problems facing Lebanon.
The weak state has long been criticized for failing to develop the country and its infrastructure. Beirut still suffers daily power cuts 25 years after the end of the 1975-1990 civil war.
Protesters called for the resignation of the government, blaming it for worsening the country’s political paralysis.
But government has been particularly poor since the eruption of the war in neighbouring Syria. That conflict has exacerbated Lebanon’s political divisions, often along sectarian lines that reflect the Syrian conflict.
The presidency has been vacant for more than a year, and the parliament elected in 2009 has extended its own term and postponed elections until 2017 on the grounds of instability.