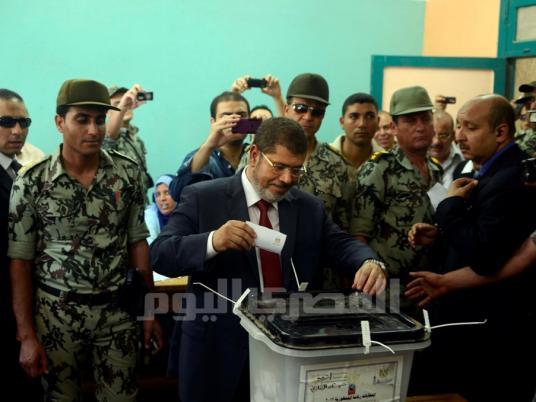 After Wednesday's administrative court ruling that put the timeline for the parliamentary elections set to begin next month into a state of suspension, Egypt’s newspapers report on the ongoing uncertainty, unrest and climate of anger across the country.

Independent newspaper Al-Shorouk runs the headline “The administrative court deals a lethal blow to parliamentary elections.” In its lead story, the paper details the court’s decision to suspend President Mohamed Morsy’s call for polls and refer the elections law to the Supreme Constitutional Court for review.

Other papers discuss the fallout from ongoing protests and growing dissent among rank-and-file security forces with the Interior Ministry leadership.

According to the paper, Central Security Forces in Mansoura destroyed the office of a military chief and attacked an Armed Forces prison after discovering that a soldier charged with running over a protester with a truck had been jailed again.

The paper also reports that three security units in Cairo are considering joining the strike movement in Nile Delta and Suez Canal cities due to ongoing casualties in their ranks and the prosecution of their colleagues.

Other news outlets say unrest among security forces is worsening and could lead to more violence.

Independent daily Al-Watan newspaper covers the unrest in a story titled “The downfall of Morsy’s state.” According to the paper, there are three elements driving the crisis to a new high: the judiciary, the elections being called off and the police. The article adds that unemployment and a new fervor surrounding revolutionary movements mean there is “no turning back” on the crisis.

Al-Watan also reports that members of Ultra Ahlawy groups surrounded security buildings and police stations in eight governorates. The news comes just two days before a verdict against dozens of defendants, including nine police officers, accused of participating in the Port Said football stadium massacre last year is set to be announced.

The paper’s headline reads “The administrative court suspends the elections: An appeal will settle the matter.”

The paper says that the president’s office and Shura Council have the right to appeal the court’s decision and will likely do so.

Al-Shorouk newspaper continues its coverage of the ongoing violence in Port Said, a flashpoint for unrest. According to the paper, protesters attacked a military court in Port Said with Molotov cocktails amid clashes. They say demonstrators are also targeting police buildings.

The paper quotes anonymous sources claiming Morsy has retracted a decision to withdraw police forces from Port Said and leave security to the military after the Interior Ministry and Armed Forces rejected the idea.

Despite the violence in Port Said, the Freedom and Justice paper draws a different image of the city.

In a story called “The Port Said the media doesn’t see,” the paper publishes pictures of quiet streets and claims the situation is stable. Furthermore, it says thousands in Port Said city are carrying on with business as usual despite acts of civil disobedience.