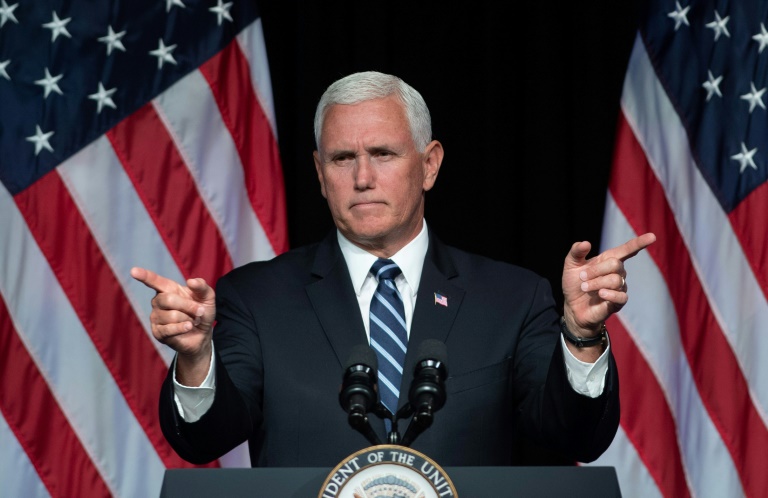 Vice President Mike Pence on Thursday unveiled details of plans to build a US Space Force that would become the sixth branch of America’s massive military, saying the time has come to prepare for “the next battlefield.”

President Donald Trump ordered the creation of Space Force in June, arguing the Pentagon needs it to tackle vulnerabilities in space and assert US dominance in orbit.

Its creation however is not a done deal, as it needs to be approved by Congress, and the concept has met with some skepticism from lawmakers and defense officials wary of the cost and added bureaucracy.

But Pence was unequivocal in presenting the administration’s wish for it to become a reality — preferably by 2020, the end of Trump’s term in office.

“The time has come to write the next great chapter in the history of our armed forces, to prepare for the next battlefield where America’s best and bravest will be called to deter and defeat a new generation of threats to our people, to our nation,” Pence told an audience at the Pentagon.

“The time has come to establish the United States Space Force,” he said, repeating Trump’s call for Congress to invest an additional $8 billion in US space security systems over the next five years.

The creation of a US Space Force reflects the drastically changed reality of space’s role in national security.

When president John F. Kennedy explained in 1962 why America was sending men to the Moon, he famously said, “There is no strife, no prejudice, no national conflict in outer space as yet.”

But 56 years later, space plays a vital role in just about every aspect of modern warfare, with many military technologies reliant on a network of orbiting sensors and satellites.

Pence said an independent Space Force was essential to counter Russia and China, which are “aggressively” working toward anti-satellite capabilities.

“China and Russia have been conducting highly sophisticated on-orbit activities that could enable them to maneuver their satellites into close proximity of ours, posing unprecedented new dangers to our space systems,” he said.

Currently, the Air Force oversees most space capabilities and there is some push back from officials who worry the Space Force’s mission would be duplicative and create turf wars.

The US military presently consists of the Army, Navy, Air Force, Marine Corps and Coast Guard.

Given the stakes surrounding building a new military branch, the issue is likely to be a political football.

Some Republican lawmakers expressed support for the project, but many Democrats derided the idea as a money pit that would jeopardize other priorities.

“Maybe, just maybe, we should make sure our people are not dying because they lack health insurance before we start spending billions to militarize outer space,” Senator Bernie Sanders tweeted.

No Republican is willing to tell Trump it’s a “dumb idea,” added the lawmaker from Hawaii. “It’s dangerous to have a leader who cannot be talked out of crazy ideas.”

Pence outlined a series of steps the Pentagon will undertake before Space Force comes online.

Key among these is the creation of US Space Command, a new organizational body that would draw in members of existing military branches.

America’s vast military divides the globe into various commands, such as Central Command in the Middle East or Indo-Pacific Command in Asia, and a new Space Command would be on equal footing with these.

It would require a new headquarters and major organizational changes.

The document outlines how America’s military is at risk in space due to adversaries pursuing “counter-space” capabilities to neutralize America’s satellites during a conflict, such as by jamming or hacking them.

“It is imperative that the United States adapts its policies, doctrine, and capabilities to protect our interests,” the document states.

Defense Secretary Jim Mattis said this week that Pence is Trump’s “point man” for Space Force, and Pentagon officials are working closely with his office.

In a letter to a congressman, he said he did “not wish to add a separate service that would likely present a narrower and even parochial approach to space operations,” adding it would create extra bureaucracy and cost.

On Tuesday, however, Mattis expressed full support for creating a new US Space Command.

“We need to address space as a developing, war-fighting domain and a combatant command is certainly one thing that we can establish,” he said.