By 2030, more than 80 percent of the deaths will occur in developing countries, which have been increasingly targeted by tobacco companies seeking new markets to circumvent tightening regulation in developed nations

WHO also highlighted the pollution generated during the production, transport and distribution of tobacco products 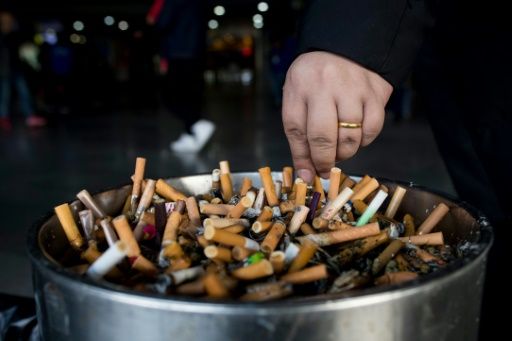 Smoking and other tobacco use kills more than seven million people each year, the World Health Organization said Tuesday, also warning of the dire environmental impact of tobacco production, distribution and waste.

The UN agency said tougher measures were needed to rein in tobacco use, urging countries to ban smoking in the workplace and indoor public spaces, outlaw marketing of tobacco products and hike cigarette prices.

“Tobacco threatens us all,” WHO chief Margaret Chan said in a statement.

In a report released ahead of World No Tobacco Day on Wednesday, WHO warned that the annual death toll of seven million people had jumped from four million at the turn of the century, making tobacco the world’s single biggest cause of preventable death.

And the death toll is expected to keep rising, with WHO bracing for more than one billion deaths this century.

“By 2030, more than 80 percent of the deaths will occur in developing countries, which have been increasingly targeted by tobacco companies seeking new markets to circumvent tightening regulation in developed nations.”

Tobacco use also brings an economic cost: WHO estimates that it drains more than $1.4 trillion (1.3 trillion euros) from households and governments each year in healthcare expenditures and lost productivity, or nearly two percent of the global gross domestic product.

In addition to the health and economic costs linked to smoking, the WHO report for the first time delved into the environmental impact of everything from tobacco production to the cigarette butts and other waste produced by smokers.

“From start to finish, the tobacco life cycle is an overwhelmingly polluting and damaging process,” WHO Assistant Director-General Oleg Chestnov said in the report.

The report detailed how growing tobacco often requires large quantities of fertilizers and pesticides, and it warned that tobacco farming had become the main cause of deforestation in several countries.

This is largely due to the amount of wood needed for curing tobacco, with WHO estimating that one tree is needed for every 300 cigarettes produced.

WHO also highlighted the pollution generated during the production, transport and distribution of tobacco products.

And waste from the process contains over 7,000 toxic chemicals that poison the environment, including human carcinogens, WHO said.

Once in the hands of the consumer, tobacco smoke emissions spewed thousands of tonnes of human carcinogens, toxic substances and greenhouse gases into the environment.

Cigarette butts and other tobacco waste make up the largest number of individual pieces of litter in the world, the agency said.

Two thirds of the 15 billion cigarettes sold each day are thrown on to the street or elsewhere in the environment, it said, adding that butts account for up to 40 percent of all items collected in coastal and urban clean-ups.

WHO urged governments to take strong measures to rein in tobacco use.

“One of the least used, but most effective tobacco control measures… is through increasing tobacco tax and prices,” Chestnov said.