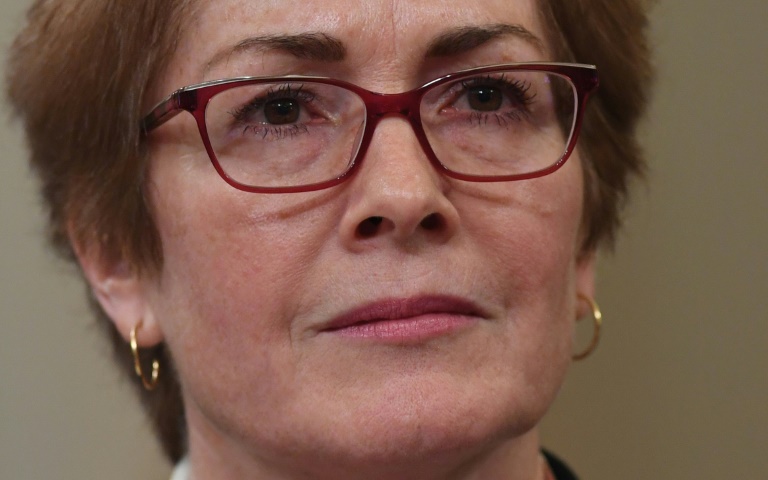 A US ambassador ousted by Donald Trump told a riveting impeachment hearing Friday she felt intimidated by the president, after he launched an extraordinary real-time attack midway through her testimony to Congress.

Testifying under oath before a national television audience, Marie Yovanovitch cut a resolute figure as she was grilled for five hours on her fraught dealings with Trump allies she accuses of undermining US foreign policy in Ukraine.

The 33-year diplomatic veteran earned a standing ovation from the public at the conclusion of her marathon testimony, during which spoke in personal terms about how she was subjected to a “painful” smear campaign before being abruptly pulled from Kiev.

Setting the scene less than an hour into the hearing, the president erupted spectacularly on Twitter with an attack on the highly-regarded former envoy.

“It’s very intimidating,” she told the panel. “I can’t speak to what the president is trying to do but I think the effect is to be intimidating.”

On a momentous day on Capitol Hill, another official provided damning closed-door testimony to impeachment investigators, reportedly outlining how he overheard a phone call on which Trump asked about “investigations” he had requested from Ukraine into domestic political rivals.

Trump’s Twitter outburst highlighted the intensity of the public hearings that seek to establish whether the president abused the power of his office for personal political gain.

The impeachment hearings kicked off Wednesday with testimony by two senior diplomats including the current top envoy to Ukraine, William Taylor.

Friday’s testimony proved richer in drama, with the president leveling attacks from afar as Yovanovitch explained to lawmakers how “dangerous” it was for US diplomats not to have the backing of their own administration.

House Intelligence Committee chairman Adam Schiff, who presides over the impeachment inquiry, hit out at “witness intimidation in real-time by the president.”

Witness tampering including intimidation is a crime, but Schiff would not say whether it was an impeachable offense, or if Democrats would make it the subject of an article of impeachment.

Trump defended his tweet, telling reporters: “I have the right to speak. I have freedom of speech just like other people do.”

The ongoing inquiry in the Democratic-controlled House of Representatives centers on accusations that Trump froze US military aid in an effort to get Ukraine to launch political investigations against potential 2020 election rival Joe Biden and his son Hunter.

The investigation threatens to make Trump the third US president to be impeached, although the Republican-controlled Senate would need to convict him to remove him from office.

Prior to her May ouster, Yovanovitch claims she was targeted by a smear campaign orchestrated in part by Trump’s personal attorney Rudy Giuliani, who is accused of helping to coordinate the president’s effort to pressure Kiev.

And when she read the memorandum of Trump’s July 25 call with Ukraine’s President Volodymyr Zelensky — in which the US leader called her “bad news” and said she was “going to go through some things” — she said “it sounded like a threat.”

Yovanovitch was “shocked” and “devastated” to learn how Trump had personally disparaged her, she added.

But above all Yovanovitch expressed alarm that envoys could be so easily “kneecapped” by false accusations and corrupt foreign influences.

“Our Ukraine policy has been thrown into disarray, and shady interests the world over have learned how little it takes to remove an American ambassador who does not give them what they want,” she said.

Yovanovitch leveled criticism at State Department leadership, and by extension Secretary of State Mike Pompeo, for failing to push back against forces that “apparently hijacked our Ukraine policy,” or to support her in the face of “dangerously wrong” attacks against her.

Pushing back, Republicans grilled Yovanovitch on Hunter Biden’s association with Ukrainian energy company Burisma while his father was vice president — leading her to acknowledge it “could raise the appearance of a conflict of interest.”

No evidence of Biden wrongdoing related to Ukraine has emerged.

His longtime aide Roger Stone was convicted Friday for lying to Congress and witness tampering related to the probe into Russian interference in the 2016 election.

Taylor’s aide David Holmes meanwhile testified in closed session that he overheard a previously unreported call between Trump and US Ambassador to the European Union Gordon Sondland, in which Trump asked about the status of the “investigations.”

That July 26 call was just one day after the Trump-Zelensky conversation in which Trump asked his counterpart to investigate the Bidens.

Sondland told Trump that Zelensky “loves your ass” and “will do ‘anything you ask him to,'” according to a copy of Holmes’s opening statement obtained by CNN.

Image: AFP / SAUL LOEB Former US envoy to Ukraine Marie Yovanovitch testifies before the House Intelligence Committee as part of the impeachment inquiry into US President Donald Trump

Ousted U.S. envoy to Ukraine tells impeachment hearing she had no political agenda