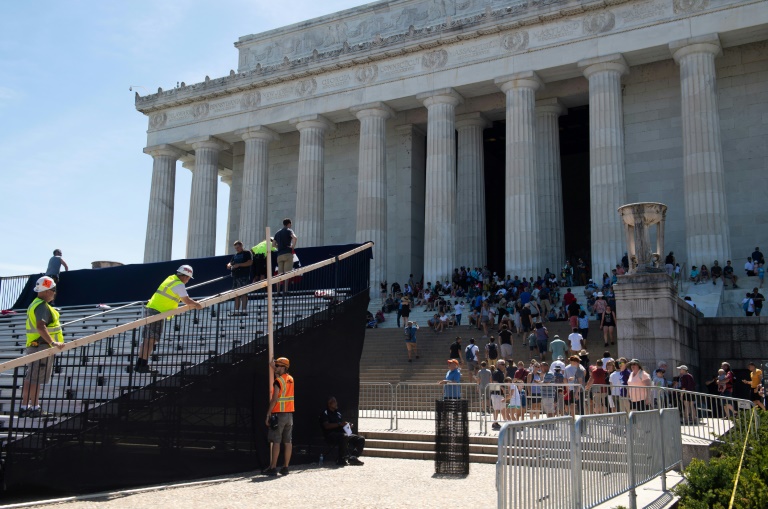 Tanks in the center of Washington, fighter jets screaming overhead, and a speech from the Lincoln Memorial steps: welcome to President Donald Trump’s tradition-wrecking Fourth of July.

Trump may be commander in chief but he’s also head showman and on Thursday he’ll turn Independence Day into a personal primetime extravaganza.

“It’s a day when people can set aside their polarized differences … and raise the flag without entering into political discussions,” he said. “Then on the 5th they go back to normal.”

But this year, the familiar script is being given a rewrite.

At around 6:30 pm (2230 GMT), Trump will take to the hallowed steps of the Lincoln Memorial for an unprecedented “Salute to America” event that will include a televised address, military hardware and a giant fireworks display.

The modified Boeing 747 used as Air Force One will fly over, as will noisy, powerful warplanes expected to include F-35s, and jets from the Navy’s Blue Angels air demonstration team.

A handful of tanks and fighting vehicles will be stationed in the vicinity, even if the enormous machines are not expected to roll, as their tracks would likely tear up city streets.

The center of attention, however, will not be the weapons. Or the fireworks.

It will be Trump.

“Your favorite President, me!” as he tweeted when announcing the occasion.

July 4th is a unique holiday in that it is hyper-patriotic but free from usual Republican-Democratic fighting and it’s far more civic than military in nature.

Inserting such a high-profile presidential address into the festivities risks changing that, given that Trump is supported strongly by about half the country ahead of his 2020 reelection bid and equally fervently opposed by the other half.

Trump insists he can bridge the divide when he speaks.

“I think so. I think I’ve reached most Americans,” he told reporters this week.

However, seconds later, the Republican plunged into his usual blistering critique of Democrats, claiming they would tax everyone at 95 percent and “destroy” the country with socialized healthcare.

Counter-protestors plan to bring their own kind of political fireworks to the National Mall, the grassy park running all the way from the Lincoln Memorial to the Capitol.

And two veterans’ groups plan to needle Trump by handing out T-shirts honoring the late senator John McCain, a Republican who often clashed with Trump.

A former reality TV star, Trump is tapping his considerable showmanship skills ahead of the event.

“The strongest and most advanced Military anywhere in the World. Incredible Flyovers & biggest ever Fireworks!” he tweeted Tuesday in what sounded like a circus advertisement.

Just being up on the Lincoln Memorial will guarantee unbeatable pictures.

The statue honoring civil war president Abraham Lincoln is famous as the location for Martin Luther King Jr’s epic 1963 “I have a dream” speech.

But Trump’s inspiration appears to be taken less from that civil rights cry than the Bastille Day military parade he attended in 2017 as a guest of French President Emmanuel Macron.

Impressed by the impeccably turned out French soldiers and equipment in the center of Paris, Trump returned, joking “we’re going to have to try to top it.”

His idea was to put on a major extravaganza for Veteran’s Day, which is marked November 11, but an outcry over the almost $100 million price tag meant it had to be scrapped.

This Thursday, he’ll get a scaled-back version.

And only political grumbling — and thunderstorms forecast that afternoon — can rain on his parade.

Image: AFP / SAUL LOEB Preparations for President Donald Trump to make a July 4th speech from the steps of the Lincoln Memorial are nearly complete but the extravaganza will go against longstanding tradition

On edge: 2020 Dems face prospect of being cut from debates