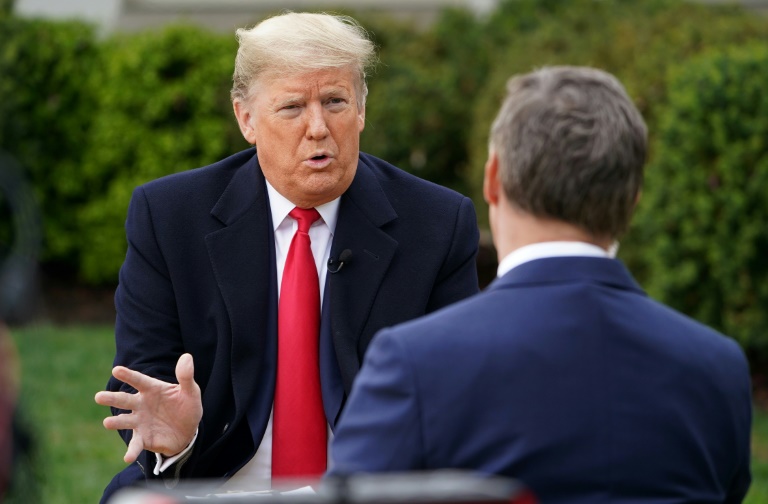 President Donald Trump insisted Tuesday that he wants the coronavirus lockdown relaxed in the United States by mid-April, warning that keeping the measures in place could “destroy” the country.

“A lot of people agree with me. Our country — it’s not built to shut down,” he said on Fox News. “You can destroy a country this way by closing it down.”

“I would love to have the country opened up and just raring to go by Easter,” Trump said. Easter is on April 12.

Social distancing and quarantine measures have been instituted across much of the United States, bringing the world’s biggest economy to an abrupt halt.

Health experts have advised the measures are the only way to prevent the easily transmitted, potentially fatal illness from multiplying uncontrollably.

In the chat show format interview with Fox at the White House, Trump made it clear that he thinks the shutdown has been an overreaction.

“We lose thousands and thousands of people a year to the flu. We don’t turn the country off,” Trump argued.

“We lose much more than that to automobile accidents. We didn’t call up the automobile companies to say, ‘Stop making cars. We don’t want any cars anymore,'” he said.

With his November reelection campaign also on hold, Trump is eager to get back into the fray. One of his main claims to a second term, prior to the coronavirus outbreak, was the strong economy and low unemployment.

“We can’t lose a Boeing, we can’t lose some of these companies,” he said. “If we lose those companies we’re talking about hundreds of thousands of jobs, millions of jobs.”