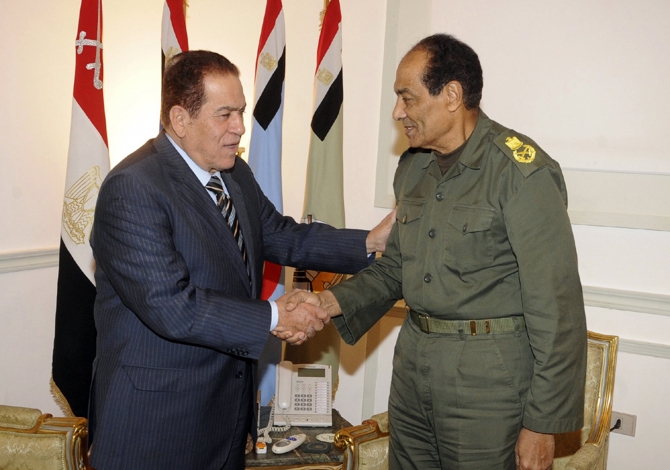 Tuesday’s papers pursue their coverage of the Cabinet reshuffle saga with contradictory headlines. For example, the privately owned Al-Shorouk leads with “Winds of change to sweep [Kamal] al-Ganzouri’s Cabinet,” in reference to the incumbent prime minister.

The paper quotes anonymous sources as saying that the Supreme Council of the Armed Forces intends to “sweep away” the existing Cabinet. Nevertheless, the shuffle will be quite minimal, as Ganzouri will just be asked to rebuild his Cabinet with no more than four new faces, according to the paper. Bassem Kamel, an MP representing the Egyptian Social Democratic Party, is quoted as saying that SCAF members had informed his party about an imminent Cabinet reshuffle to contain the outrage of Muslim Brotherhood-affiliated members of Parliament, which culminated in their suspension of parliamentary sessions until next week.

The Muslim Brotherhood’s mouthpiece Freedom and Justice Newspaper says the generals tried to convince Ganzouri to reshuffle his Cabinet, but he refused. The paper quotes an anonymous source in the Cabinet as saying the generals are keen to introduce changes to the government in order to ease its tensions with Parliament. Yet it seems that this discourse aims at downplaying an actual clash between the generals and the Muslim Brotherhood over the Cabinet and allowing the Brothers to save face. A quick glance at state-owned Al-Ahram refutes the reporting of the Brothers’ paper and shows that the generals may not bend to Brotherhood pressure so easily.

On its front page, Al-Ahram quotes Fayza Abouelnaga, planning and international cooperation minister, as saying that the Cabinet will remain in office. In the same story, General Mohsen al-Fangary, a SCAF member, says in a seemingly sarcastic tone: “Whoever announced there will be a Cabinet reshuffle shall be held responsible for that talk,” in reference to Saad al-Katatny, the speaker of the People’s Assembly who announced on Sunday that the generals would announce a Cabinet reshuffle within two days.

The Wafd Party’s mouthpiece paper, Al-Wafd, headlines on its front page a report on these conflicting statements: “The SCAF is manipulating the Brothers.” The paper reports that some MPs have called for Katatny’s removal from his speakership in protest of the manner in which he conducted the vote over suspending parliamentary sessions on Sunday. These MPs allege that the decision was not made with the consent of the majority of the MPs. More than 160 Salafi, liberal and independent MPs have filed a complaint with Katatny expressing their objection to Brotherhood calls to sack or reshuffle the Cabinet, arguing that there are only 23 days left before the presidential poll and that is not enough time to form a new Cabinet, says the Al-Wafd report.

The paper also quotes Mostafa Bakry, an MP known for his close ties with the intelligence services, as saying Ganzouri had informed him that the incumbent Cabinet will continue its duties and that the generals did not ask him to step down or introduce any major or minor reshuffle.

Most papers highlight the violent clashes that erupted between protesters and unidentified attackers near the Defense Ministry on Sunday night. Al-Shorouk reports that thugs attacked protesters, who are mostly Salafi supporters of disqualified presidential hopeful Hazem Salah Abu Ismail, with melee weapons, bird shot and stones. The paper quotes a doctor from a field hospital there as saying his team has treated 65 injured from the clashes, including a 13-year-old child. This child was apparently shot in the eye before being transferred to a nearby proper hospital. Mohamed Saleh, the doctor, added that thugs had besieged the nearby Nour Mosque. Later, clashes erupted between them and protesters who went to perform dawn prayers there. After these clashes, some protesters reportedly disappeared, adds the paper.

While Al-Shorouk’s coverage implies that Abu Ismail’s backers were victims, the coverage from Al-Akhbar portrays them as the culprits. The state-owned daily says six protesters, including one Palestinian from the West Bank, were arrested on grounds of inciting violence and carrying melee weapons. The paper adds that a driver named Mohamed Mortada informed the police about two bombs he had found near the Nour Mosque. Mortada also said he had seen a man wearing a white robe, a typical Salafi male outfit, carrying an automatic gun and shooting during the clashes.

On its front page, Al-Shorouk reports that the Interior Ministry is carrying out a plan “to bring together the members of the old [Mubarak] regime.” The report says the ministry breached the pledge it made to Parliament earlier this year by relocating Hosni Mubarak’s men back to the same prison. The paper says two of Mubarak’s ministers were brought back to Tora Prison, including Mohamed Ibrahim Suleiman, Mubarak’s housing minister and Sameh Fahmy, his petroleum minister. The Cabinet had vowed earlier to disperse Mubarak’s men in different prisons after MPs alleged that their residing in the same jail was allowing them to plot a counter-revolution.

In his Tuesday column, prominent writer Wael Qandil voices a ruthless criticism of the Egyptian government’s handling of the ongoing crisis with Saudi Arabia over the detention of Egyptian lawyer Ahmed al-Gizawy. Qandil contends that the Egyptian government and media have looked too complacent and apologetic to the Saudis.

“Nobody has objected to the [Saudi] arm-twisting policy of closing down the embassy, threats to stop issuing visas to Egyptians, using Egyptian workers in Saudi Arabia as a pressure card and summoning the [Saudi ambassador]. By diplomatic norms, all these actions should have outraged and humiliated any state in the world,” he wrote.

“On the contrary, the Egyptian government reacted as if it were a weak follower and considered all Saudi actions righteous and not open for discussion,” he added.