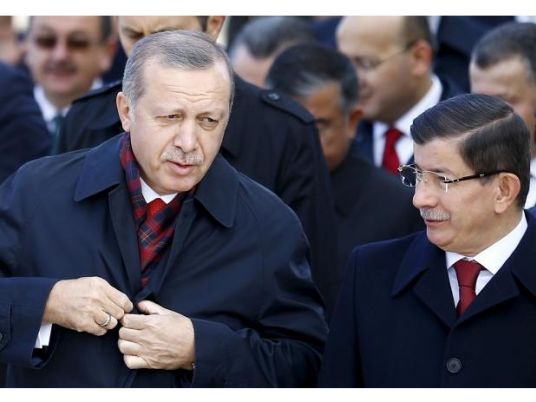 Turkey's ruling party is set to replace Prime Minister Ahmet Davutoglu at an extraordinary congress in the coming weeks, officials said on Wednesday, signaling the end of his term as premier and plunging the country into political uncertainty.

The decision, confirmed to Reuters by five AK Party officials, came after a meeting of more than 1-1/2 hours between Davutoglu and President Tayyip Erdogan that followed weeks of increasingly public tension between the two men.

Erdogan wants an executive presidency in Turkey to replace the current parliamentary system, a plan for which Davutoglu has offered only lukewarm support. His departure is likely to pave the way for a successor more willing to back Erdogan's ambition of changing the constitution and strengthening the presidency, a move opponents say will herald growing authoritarianism.

"The president and prime minister reached agreement on the congress … I don't think Davutoglu will be a candidate again," one of the officials told Reuters.

The leader of the AKP, which has governed Turkey since 2002, also serves as prime minister. Davutoglu's likely departure looms as Turkey faces mounting security challenges, with a Kurdish insurgency in its southeast and the spillover of the war in Syria on its southern border.

The European Union is counting on Turkey to help stop migrants streaming into the continent under a landmark accord brokered by Davutoglu, and Washington is drawing on NATO member Ankara's support in fighting Islamic State in Syria and Iraq.

The lira weakened more than 4 percent to 2.976 to the dollar, its weakest since the end of February, as investors balked at the prospect of more uncertainty.

"Davutoglu's likely early exit as party leader and PM constitutes another episode that show that Erdogan's dominance over the AKP and the executive is absolute and unchallenged," said Wolfango Piccoli, head of research at Teneo Intelligence.

"In the short term policy paralysis will prevail and then, once a new party leader is elected, a more incisive effort to amend the constitution could ensue," he told Reuters.

The AKP official said the congress would be held as soon as May 21 and no later than June 6, the first day of the Islamic holy month of Ramadan, and that Erdogan was adamant there should be no vacuum of power at the head of government.

Erdogan's drive to tighten his grip on power has caused an increasingly open rift with Davutoglu, encompassing issues from relations with Europe to the pre-trial detention of government critics. [L5N17Z3R0]

Erdogan, a political fighter hardened by a childhood in Istanbul's rough Kasimpasa district, wants a robust presidential system as a guarantee against the fractious coalition politics that hampered Turkey in the 1990s. His opponents see a stronger presidency as a vehicle for his own ambition.

Such a system would have seen Davutoglu, a more mild-mannered academic and former diplomat who lacks Erdogan's natural appeal to crowds, sidelined.

The two have governed in a strained alliance since Erdogan won the presidency in 2014 and Davutoglu replaced him as prime minister. Aides to Davutoglu had largely dismissed the tensions as matters of style rather than substance.

But in the clearest sign yet of a power struggle, the authority to appoint provincial AKP officials was taken from Davutoglu last week. The move reduced Davutoglu's hold over the party grassroots and cemented Erdogan's influence.

The two leaders have appeared at odds over the deal with the EU to stem the flow of illegal migrants from Turkish shores to the Greek islands, in return for which Ankara has been promised accelerated EU accession talks, visa liberalization and financial aid. The deal has been Davutoglu's project, and its future may be less certain after his departure.

Erdogan, frequently critical of the EU, has at times appeared to belittle Davutoglu's progress, most notably efforts to win visa-free travel to Europe by June, the main prize in the eyes of many Turks.

"During my time as prime minister it was announced (this) would come in October 2016," Erdogan said recently. "I don't understand why bringing it forward four months is presented as a win. I'm saddened by the presentation of small things in a bigger light."