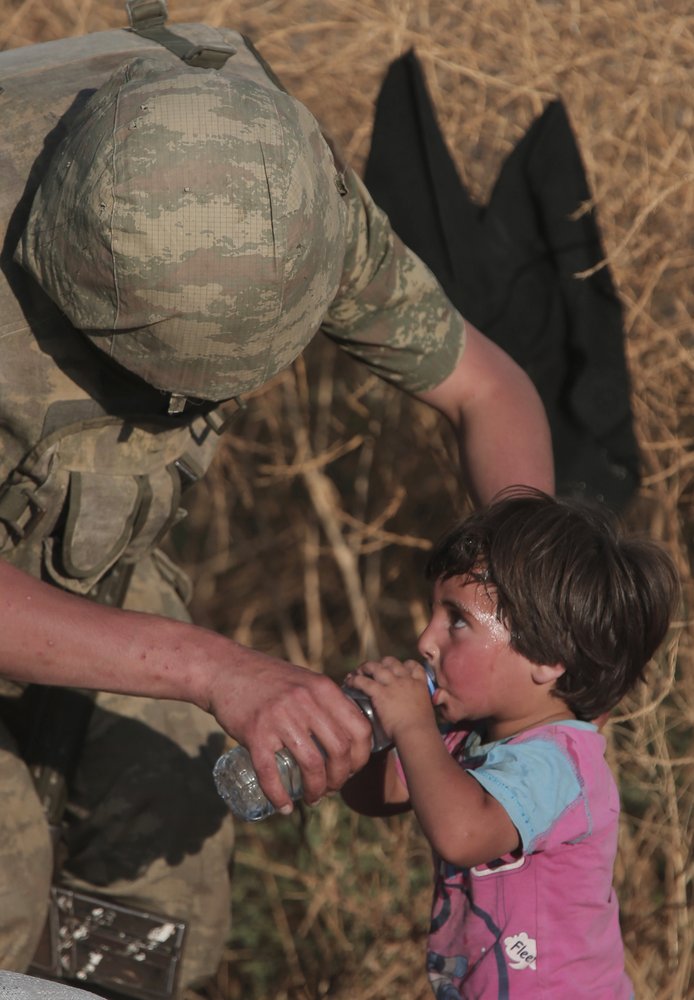 As Turkish forces invaded northern Syria in early October, supporters of the offensive launched a different kind of campaign — online.

Dozens of images claiming to show Turkey’s soldiers cuddling babies, feeding hungry toddlers and carrying elderly women spread across Twitter and Instagram where they were liked, retweeted and viewed thousands of times thanks also to popular hashtags.

Except some of the photos weren’t of Turkish soldiers. None of them were recent and some had been taken in parts of Syria unconnected to the invasion – even in other parts of the world.

The online campaign follows a pattern of social media propaganda that seeks to sway global opinion when controversial, international events erupt. In August, for instance, Twitter announced it had suspended more than 200,000 accounts thought to be run by Beijing to peddle propaganda targeting the pro-democracy protests in Hong Kong. YouTube soon followed, disabling more than 200 videos believed to be part of a coordinated, misinformation attack on the demonstrations.

In last month’s instance, the images began making the rounds in the days after President Donald Trump’s widely criticized withdrawal of U.S. troops opened the way for the Turkish offensive against the Kurds on the border with northeastern Syria.

They weren’t the only ones. Social media posts sympathetic to the Kurds also wrongly linked Turkey to horrifying images of military assaults or war victims. Such tweets included a photo of a girl with severe burns on her face that purported to show that Turkey had dispersed white phosphorus on Kurds. In fact, the April 2015 image was shot by a Reuters photographer in Yemen.

But unlike the pro-Kurdish images, the false and misleading posts promoting Turkey appeared to get a boost from a coordinated network of Twitter accounts that amplified the content through trending hashtags and retweets.

“That is not the norm of normal behavior on Twitter,” said Gideon Blocq, the CEO of VineSight, a technology company that tracks misinformation online and reviewed the pro-Turkey tweets at The Associated Press’ request. Their analysis examined the frequency of the tweets, use of stock photos and locations of six Twitter accounts that promoted the images and their followers, among other things, all traits that signal inauthentic behavior.

“One can conclude that these automated accounts are there to push content,” Blocq said.

Social media propaganda is a tactic with a proven success rate. Countries and foreign actors are simply copying the methods used by Russians to spread misinformation about America’s 2016 presidential election, said P.W. Singer, the co-author of “LikeWar: The Weaponization of Social Media.”

Masked by social media accounts that looked like they belonged to average Americans, Russia duped people into sharing misleading or false images, text and videos about presidential candidates, newsworthy events or political parties.

“The lesson that they all took was that not only does it work — but it’s cheap and easy to pull off with little consequence,” Singer said. “This is the new normal in war, politics and business.” he said.

There are many examples from Syria, where viewers have weaponized misleading images to revile or cheer on the Turkish forces.

In early October, the ex-mayor of Ankara and other Twitter accounts shared footage of what purported to be a Turkish assault on the Kurds in Syria. The video was shared and viewed thousands of times, and ABC News aired it. But it turned out to have been taken at a military gun demonstration in Kentucky, and ABC later apologized for airing the footage.

However, dozens of misrepresented images shared widely with the help of hashtags have cast the Turkish invasion in a more favorable light. Since it began, Twitter accounts — some of which were just created in September — shared positive but misleading photos of Turkish soldiers that were liked and retweeted hundreds of times. The tweets linked the photos to hashtags like #TurkishArmyForThePeace and #TurkeyIsJustKillingTerrorists. Many of the tweets came from accounts that claimed to be based in the Middle East.

For example, a supposedly recent photo showing a Turkish soldier giving a Syrian girl water was, in fact, shot by an Associated Press photographer in 2015. And an image that purported to show a Syrian woman in purple being carried by Turkish soldiers made the rounds on Twitter but was, in fact, taken by AP in 2010, during flooding evacuations in Pakistan.

Turkey itself, which as of last week had detained 452 people for social media posts critical of the northern Syria, has also put out a tightly controlled narrative on Twitter.

One of the most widely shared photos was first posted to Twitter by Turkey’s ministry of defense, hours after the White House announced on Oct. 6 that U.S. troops would clear the way for an expected Turkish assault in northeastern Syria.

The image, which has been used by Turkish propaganda sites before, showed a kneeling Turkish soldier holding the hand of a little girl in a blue sweater against the backdrop of a military vehicle adorned with the Turkish flag. It was shared by Twitter users in subsequent days on Twitter, accompanied with the #TurkishArmyForThePeace hashtag.

Asked about the photos and hashtags used to spread the images, Twitter spokeswoman Liz Kelley told the AP the tech company has not seen any evidence of coordinated campaigns to share false information about the Turkish offensive on its site.

But VineSight’s independent analysis of several accounts that promoted these and other misleading pro-Turkey photos on Twitter in the invasion’s early days not only found signs of automation, but also noted that an overwhelming majority of the accounts’ followers listed locations in Pakistan.

While it’s impossible to determine who is behind the accounts using only the publicly available information on profiles, VineSight’s findings suggest they are part of an automated network promoting certain hashtags, images and tweets.

“It’s extremely difficult to build up such a network — it takes some time and manual work,” said Yoel Grinshpon, vice president of research for VineSight. “I would guess it’s somebody who has resources.”

File – In this June 14, 2015, file photo a Turkish soldier offers water to a Syrian refugee child after crossing into Turkey from Syria, in Akcakale, Sanliurfa province, southeastern Turkey. As Turkish forces invaded northern Syria in early October 2019, supporters of the offensive launched an online misinformation campaign. Dozens of misleading images claiming to show Turkey’s soldiers cuddling babies, feeding hungry toddlers and carrying elderly women spread across Twitter and Instagram where they were liked, retweeted and viewed thousands of times. They included this photo, which was, in fact, shot by an Associated Press photographer in 2015. (AP Photo/Lefteris Pitarakis, File)