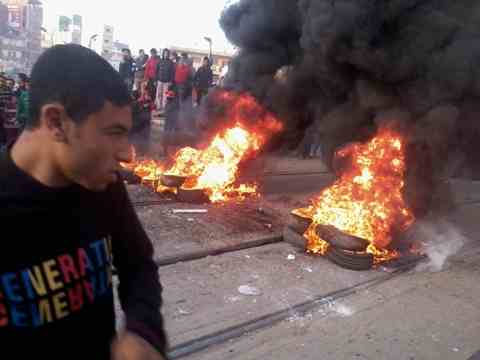 Two people were killed in an attack on a youth centre in the neighbourhood of Kerdasa in Giza early Thursday, a civil protection official said.

Magdy al-Shalaqani, director of the civil protection administration in Giza, told Aswat Masriya the Nahia Youth Centre caught fire after unidentified assailants attacked it with Molotov cocktails. The centre was burnt to the ground.

Explosives experts moved to the scene of the attack, Shalaqani said, adding that they could not find any explosive devices.

Violent attacks on security forces have surged since the military ouster of Islamist president Mohamed Mursi in July 2013, following mass protests against his rule.

Lately, however, the scope for violence has widened, with attacks on multinational shops and restaurants becoming more frequent, gripping the lives of unarmed civilians.

A teenage employee at a Kentucky Fried Chicken (KFC) branch in Menoufia wasburnt alive in a similar attack with Molotov cocktails on the restaurant on February 5.