China has also been infuriated by the U.S. deployment of an advanced Terminal High Altitude Area Defense (THAAD) anti-missile system in South Korea, saying it was a threat to its security and would do nothing to ease tension with Pyongyang 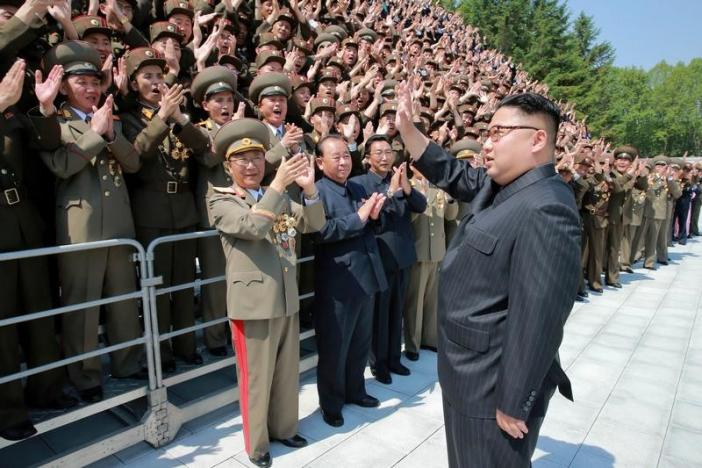 The U.N. Security Council on Friday expanded targeted sanctions against North Korea after its repeated missile tests, adopting the first such resolution agreed by the United States and Pyongyang’s only major ally China since President Donald Trump took office.

The Trump administration has been pressing China aggressively to rein in its reclusive neighbor, warning that all options are on the table if Pyongyang persists with its nuclear and missile development programs.

The United States has struggled to slow those programs, which have become a security priority given Pyongyang’s vow to develop a nuclear-tipped missile capable of hitting the U.S. mainland.

“The United States will continue to seek a peaceful, diplomatic resolution to this situation,” U.S. Ambassador to the United Nations Nikki Haley told the council after the vote.

But she added: “Beyond diplomatic and financial consequences, the United States remains prepared to counteract North Korean aggression through other means, if necessary.”

Adding names to the U.N. blacklist – a global travel ban and asset freeze – was the minimum sanctions measures the Security Council could have taken and comes after five weeks of negotiations between Washington and Beijing.

The resolution, adopted unanimously by the 15-member council, sanctions four entities, including the Koryo Bank and Strategic Rocket Force of the Korean People’s Army, and 14 people, including the head of Pyongyang’s overseas spying operations.

North Korea’s Koryo Bank handles overseas transactions for Office 38, a shadowy body that manages the private slush funds of the North Korean leadership, according to a South Korean government database.

The measures adopted on Friday could have been agreed by the council’s North Korea sanctions committee behind closed doors, but Washington convinced China to back a public vote on the blacklist, amplifying the council’s unhappiness with Pyongyang’s defiance of a U.N. ban on ballistic missile launches.

The U.N. Security Council first imposed sanctions on Pyongyang in 2006 over its ballistic missile and nuclear programs and has ratcheted up the measures in response to five nuclear tests and two long-range missile launches. North Korea is threatening a sixth nuclear test.

“There is a critical window of opportunity for the nuclear issue of the peninsula to come back to the right track of seeking a settlement through dialogue and negotiations,” Chinese U.N. Ambassador Liu Jieyi told the council.

“It is incumbent on all parties concerned to exercise restraint and to do more to help ease the tension and build mutual trust.”

Haley said: “We want a negotiated solution, but North Korea must fulfill its basic obligations by first stopping all ballistic missile launches and nuclear weapons testing and taking concrete steps toward getting rid of its nuclear weapons program.”

U.S. Secretary of State Rex Tillerson told the Security Council on April 28 that it needed to act before North Korea does. Just hours after the meeting – chaired by Tillerson during his first visit to the United Nations as the top U.S. diplomat – Pyongyang launched yet another ballistic missile.

Within days the United States proposed to China that the Security Council strengthen sanctions on North Korea over its repeated missile launches. Traditionally, the United States and China have negotiated new sanctions before involving the other council members.

Pyongyang has launched several more ballistic missiles since then, including a short-range missile on Monday that landed in the sea off its east coast.

Diplomats said it appeared China was still only likely to consider additional strong new U.N. sanctions measures, such as an oil embargo, a ban on Pyongyang’s airline or tougher economic sanctions, if North Korea conducted a long-range missile launch or another nuclear test.

The last round of complex sanctions imposed by the Security Council took three months to negotiate following Pyongyang’s fifth nuclear test in September. Those measures aimed to cut North Korea’s annual export revenue by a quarter.

China has also been infuriated by the U.S. deployment of an advanced Terminal High Altitude Area Defense (THAAD) anti-missile system in South Korea, saying it was a threat to its security and would do nothing to ease tension with Pyongyang.

Security Council veto power Russia backed the U.N. measures on Friday. Moscow’s support had been unclear after the United States imposed its own sanctions on Thursday on Russian firms for their support of North Korea’s weapons programs.

“This step is something that is very puzzling and deeply disappointing,” Deputy Russian U.N. Ambassador Vladimir Safronkov said of the U.S. sanctions amid battered U.S.-Russia relations.

The United States is encouraged by China’s efforts to restrain North Korea, U.S. Defense Secretary Jim Mattis said in Singapore on Saturday, adding the threat from North Korea was “clear and present”.

Reporting by Michelle Nichols at the United Nations and Osamu Tsukimori in TOKYO; Editing by James Dalgleish and Kim Coghill; Reuters