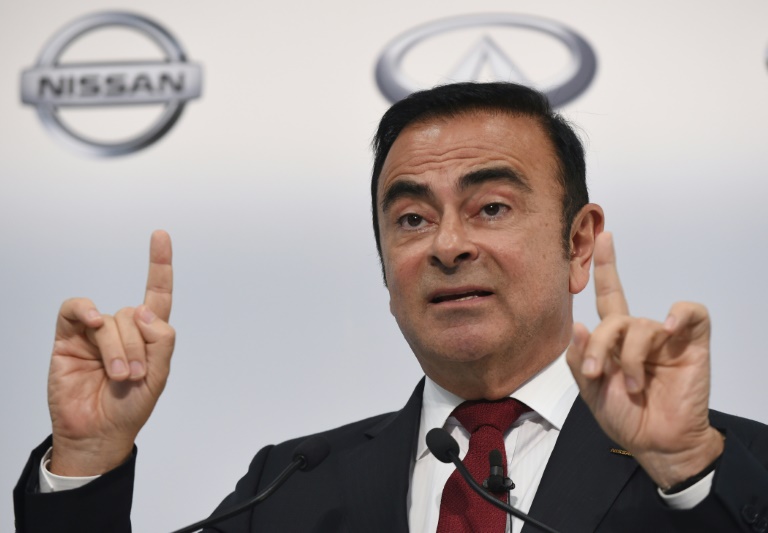 Former Nissan boss Carlos Ghosn said Tuesday he had been “wrongly accused and unfairly detained” at a high-profile court hearing in Japan, his first appearance since his arrest in November rocked the business world.

Entering the court handcuffed and with a rope around his waist, the once-revered titan of the auto industry mounted a passionate defense against a string of financial misconduct allegations.

The 64-year-old was thinner — his family says he has lost up to 20 kilogrammes (44 pounds) due to the rice-based diet in his Tokyo detention center — and his hair was greying. He appeared in a dark suit without a tie and wore dark green plastic slippers.

“I have been wrongly accused and unfairly detained based on meritless and unsubstantiated accusations,” he told the Tokyo District Court in a clear and steady voice.

Throughout proceedings, he showed no emotion and mostly faced forward or looked down, glancing occasionally at the gallery in the packed courtroom as journalists and sketch artists rushed in and out.

His cheekbones were more prominent as a result of the weight loss but the executive otherwise appeared in decent health, coughing occasionally during the hearing.

In a career spanning decades, during which he won praise for turning around the struggling Japanese car maker, he said he had “always acted with integrity” and had never before been accused of any wrongdoing.

“I have acted honorably, legally and with the knowledge and approval of the appropriate executives inside the company,” stressed Ghosn.

From the moment on November 19 that prosecutors stormed his private jet at a Tokyo airport, the twists and turns of the Ghosn case have gripped Japan and the business world.

At one point, the Franco-Lebanese-Brazilian tycoon appeared on the point of release, only for prosecutors to produce further allegations against him to continue his custody.

In an indication of the interest the case has sparked in Japan, more than 1,000 people waited outside the court from the early hours in the hope of getting one of just 14 tickets for the public gallery.

Tuesday’s hearing itself caught observers off-guard as Ghosn’s lawyers deployed a rarely-used article of the Japanese Constitution to force the court to explain the reasons for his detention.

Presiding Judge Yuichi Tada read out the charges against Ghosn and said he was being detained because he was a flight risk and there was a possibility he would conceal evidence.

The suspect has “bases in foreign countries” and may “escape”, Tada said.

Go Kondo, one of Ghosn’s lawyers, countered: “There is no risk that he will run away. He’s CEO of French company Renault. He’s widely known so it’s difficult for him to escape.”

Ghosn is expected to be kept in custody until at least January 11.

He faces a host of allegations of financial impropriety.

Prosecutors have formally charged him over suspicions he under-declared some five billion yen ($44 million) from his salary in documents to investors over five fiscal years from 2010 — apparently to avoid accusations he was paid too much.

Authorities also suspect he continued this scheme over the next three tax years, seeking to defer another four billion yen of his salary until after retirement.

A third, more complex, accusation is that he sought to shift personal foreign exchange losses onto Nissan’s books and then paid a business contact from Saudi Arabia some $14.7 million — supposedly from company funds — who allegedly stumped up collateral for him.

Ghosn has not been formally charged over the latter two allegations and systematically rebutted all of them in court.

“I never received any compensation from Nissan that was not disclosed,” he said.

He added that Nissan never incurred any losses from his foreign exchange contracts and that the Saudi partner, Khaled Juffali, was “appropriately compensated” for “critical services that substantially benefited Nissan”.

A statement issued on behalf of Juffali’s company, the first since the allegations emerged, said the compensation was for work done to benefit Nissan, including resolving a local business dispute and lobbying for the approval for a new plant in Saudi Arabia.

A towering figure in the auto industry, Ghosn is credited with turning around a struggling Nissan — also giving him a high profile rare for foreign executives in Japan.

He forged an unlikely three-way alliance between Mitsubishi Motors, Renault and Nissan that now outsells any other rival group.

Ghosn said that reviving the fortunes of the Japanese firm was “the greatest joy of my life, next to my family”.

But his arrest has laid bare divisions in the tie-up.

Nissan and Mitsubishi Motors promptly removed him as chairman whereas the French firm has kept him on while he fights the allegations.

In an interview with AFP on the eve of the hearing, current Nissan CEO Hiroto Saikawa said of the partnership: “I don’t think it’s in danger at all.”

Carlos Ghosn to 'vigorously' defend himself in Japanese court: son

Ghosn set for court hearing in Japan over detention