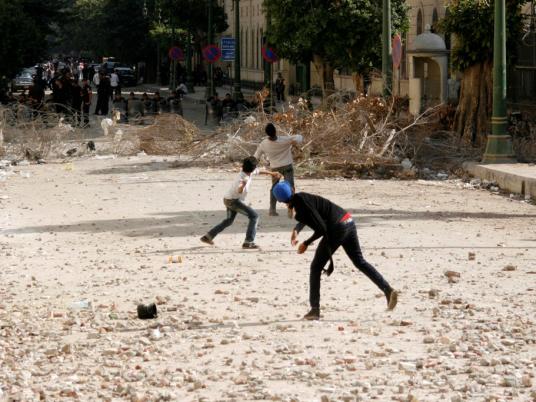 Photos circulated on social media Tuesday of activist Gaber Salah Gaber alongside claims that he was killed in clashes on the streets surrounding Mohamed Mahmoud. Head of the emergency department at Qasr al-Aini Hospital Hesham Abu Aisha says Gaber is currently on a ventilator in the intensive care unit.

He told MENA that Gaber was shot by rubber bullets in his head, neck, chest and arm. Aisha added that Gaber has a hematoma on the right lung.

Aisha said that shots had injured Gaber’s brain and that surgical intervention would be useless.

Clashes that began on Monday flared up again after a day of calm on Tuesday evening with both protesters and police throwing rocks at one another in the area surrounding Mohamed Mahmoud Street.

Some of the Shura Council’s windows were smashed during the clashes, and parts of the wall surrounding the Parliament building were broken off.

Hundreds of protesters retreated to Tahrir Square and started to close entrances to the square at the Egyptian Museum and Qasr al-Nil Bridge, causing severe traffic congestion as cars were forced to drive against traffic on a number of surrounding streets.

Explosions have been heard periodically in the area.

Earlier on Tuesday, Khaled al-Khatib, an official at the Health Ministry, announced in a press statement that the number of injuries in the ongoing clashes has reached 61 and no deaths have occurred so far.

Central Security Forces threw rocks at protesters from on top of a building, injuring many.

Some protesters set tires ablaze, pelted rocks at the soldiers and chanted demanding to bring down the regime and prosecute former Mubarak officials as well as figures in the Interior Ministry.

Clashes broke out Monday evening after security forces used tear gas to disperse protesters and prevent them from approaching the Interior Ministry.

The clashes came during a rally marking the first anniversary of the Mohamed Mahmoud Street clashes in November 2011, during which over 40 people were killed after police and security forces forcibly cleared Tahrir Square of protesters demonstrating against the then-ruling Supreme Council of the Armed Forces.

On Monday, the protesters chanted against Interior Ministry policies. Some wore black armbands, while others covered their eyes with gauze to reference protesters who were shot in the eye during the clashes one year ago.

An Interior Ministry official claimed that “outlaws” infiltrated the demonstrations, Monday, hurling rocks and Molotov cocktails at the security forces charged with securing important facilities in the area.

The official said in a statement that a Molotov cocktail landed on the wall of the Shura Council, and another on Barclays Bank, causing limited fires in both buildings that were brought under control by security forces.

The statement added that the security forces then used tear gas to keep protesters away from the facilities.