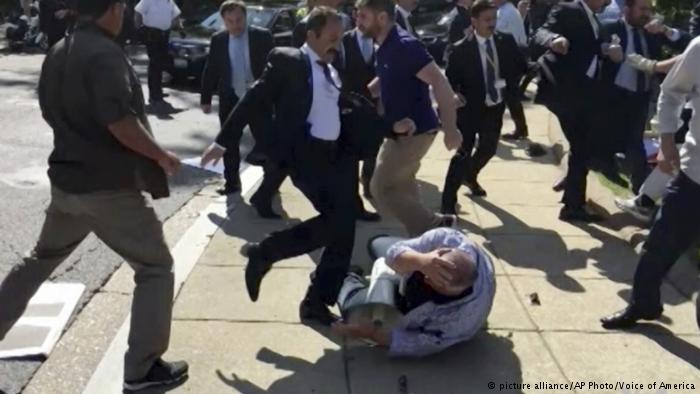 The US has voted to freeze arms sales to Turkish President Recep Tayyip Erdogan’s security guards. The move comes after Erdogan’s bodyguards were filmed in May assaulting Washington protesters in broad daylight.

The US Senate on Monday voted to block the sale of $1.2-million (1-million-euros) worth of arms to Turkish President Recep Tayyip Erdogan’s personal security guards, finding that such a deal would have effectively endorsed “their history of excessive force.”

The decision comes as 15 members of Erdogan’s security detail face assault charges in the US in connection with last May’s attack on mainly Kurdish protesters outside the Turkish ambassador’s residence in Washington. The assault, which took place in broad daylight, was caught on camera and widely shared online and in the media. None of Erdogan’s personnel has responded to a US grand jury’s call for a trial.

Monday’s vote also coincided with Erdogan’s arrival in New York for the UN General Assembly, his first visit to the US since the assaults last spring.

Patrick Leahy and Chris Van Hollen, the Democratic senators who proposed the legislation, said US firearms manufacturers should also stop selling weapons to units of the Turkish National Police “that have been arbitrarily arresting and abusing Turkish citizens who peacefully criticize the government.”

Future sales could also be blocked

Earlier this year, the US administration informed Congress that it planned to allow US gunmaker Sig Sauer to go ahead with the $1.2 million sale. However, lawmakers said Erdogan’s presidential visit to the US had raised serious concerns over the behavior of his security unit.

Following the assault on demonstrators, the Trump administration informed Ankara that it would put the sale on hold. Monday’s Senate vote all but withdraws the proposal and could see future arms sales to Turkish security units blocked as well.

Van Hollen said the move to cancel the sale was “too little, too late,” but nevertheless welcome. “It should never have been something that we were considering.”

Sig Seuer appeared to have pulled its request for the US government to sanction the sale to Turkey once it became apparent from Erdogan’s office that they no longer planned to purchase the firearms.

The Republican representative for Michigan, Dave Trott, hailed the move, saying a decision to go ahead with the deal “would have been nothing short of an endorsement” for the attack carried out by Erdogan’s security. By freezing the deal, the US was effectively putting “a finger to Erdogan’s chest” and telling him he was not above the law, Trott added.

The T-shirt that's getting people detained in Turkey