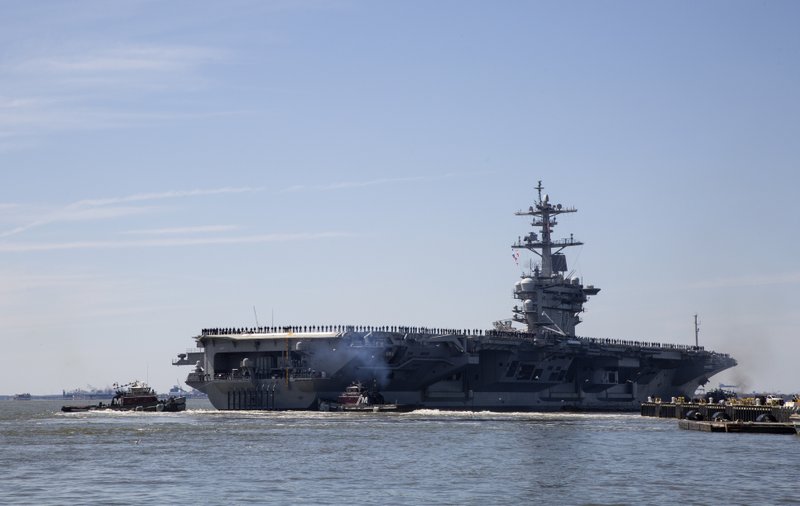 DUBAI, United Arab Emirates (AP) — A sudden White House announcement that a U.S. aircraft carrier and a bomber wing would be deployed in the Persian Gulf to counter Iran comes just days ahead of the anniversary of President Donald Trump’s decision to withdraw America from Tehran’s nuclear deal.

Iranian President Hassan Rouhani is said to be planning a speech Wednesday on the anniversary to discuss the next steps Tehran will take in confronting the U.S. Officials in the Islamic Republic previously warned that Iran might increase its uranium enrichment, potentially pulling away from a deal it has sought to salvage for months.

The military has almost always had an aircraft carrier in the Persian Gulf as part of its sprawling military presence in the strategic region, but had begun to scale back its presence as the air campaign against the Islamic State group in Iraq and Syria wound down.

Sunday night’s statement from national security adviser John Bolton said the USS Abraham Lincoln, other ships in the carrier’s strike group and a bomber wing would deploy to the Mideast. Bolton blamed “a number of troubling and escalatory indications and warnings,” without elaborating.

“The United States is not seeking war with the Iranian regime, but we are fully prepared to respond to any attack, whether by proxy, the Islamic Revolutionary Guard Corps, or regular Iranian forces,” Bolton said.

In Iran, the semi-official ISNA news agency on Monday quoted an anonymous official as saying that Rouhani planned a broadcast address Wednesday and may discuss the “counteractions” Tehran will take over America’s withdrawal from the nuclear deal. It said Iranian officials have informed their European counterparts — with whom Iran has been trying to salvage the agreement — of the planned speech.

“Partial and total reduction of some of Iran’s commitments and resumption of some nuclear activities which were ceased following (the deal) are the first step,” ISNA said. Iranian state television and the semi-official Fars news agency similarly suggested an Iranian response loomed.

The United Nations’ nuclear watchdog says Iran has continued to comply with the terms of the 2015 nuclear deal, which saw it limit its enrichment of uranium in exchange for the lifting of economic sanctions. But American sanctions have wreaked havoc on Iran’s already-anemic economy, while promised help from European partners in the deal haven’t alleviated the pain.

It’s unclear what specific threat American officials perceive coming from Iran. A U.S. official, who spoke to The Associated Press on condition of anonymity to discuss intelligence matters, said American troops at land and sea could be targeted.

The USS Abraham Lincoln had been in the Mediterranean Sea conducting operations alongside the USS John C. Stennis, another aircraft carrier that has twice been in the Persian Gulf in recent months.

However, American military officials have stopped the near-continuous presence of aircraft carriers in the Persian Gulf, a pattern set following the 1991 Gulf War. American air bases spanning the region can scramble fighter jets and drones, lessening the necessity of an aircraft carrier as U.S. officials also worry about China and Russia.

Across the wider 5th Fleet, there were 17 warships deployed, according to the most-recent count by the U.S. Naval Institute, which tracks deployments around the world.

The Bahrain-based 5th Fleet declined to comment on the White House announcement when reached by the AP on Monday.

It also remains unclear what bomber wing would be deployed to the region. Typically, the al-Udeid Air Base in Qatar, home to the forward headquarters of the U.S. military’s Central Command, hosts such bomber deployments.

In late March, the Air Force acknowledged a rare gap in bomber cover in the Mideast after a squadron of B-1 Lancers left al-Udeid to return to Texas. B-52 bombers also had been deployed to the area to keep up attacks on the Islamic State group, the first time the aging aircraft had deployed to the region in 25 years.

Officials at al-Udeid, which also hosts the F-35 fighter jet, declined to answer questions from the AP.

The Trump administration, which abruptly announced in December that it was pulling out of Syria, still maintains 2,000 U.S. troops in the northern part of the war-torn country. Officials suggest they serve as a check on Iranian ambitions and help ensure that Islamic State fighters do not regroup. No significant U.S. forces have so far withdrawn from Syria.

Trump has also said he has no plans to withdraw the 5,200 troops stationed in Iraq as part of a security agreement to advise, assist and support the country’s troops in the fight against IS. Earlier this year, Trump angered Iraqi politicians and Iranian-backed factions by saying troops should stay there to keep an eye on neighboring Iran.

FILE – In this April 1, 2019, file photo, the USS Abraham Lincoln deploys from Naval Station Norfolk, in the vicinity of Norfolk, Va. The White House said Sunday, May 5, that the U.S. is deploying military resources to send a message to Iran. White House national security adviser John Bolton said in a statement that the U.S. is deploying the USS Abraham Lincoln Carrier Strike Group and a bomber task force to the U.S. Central Command region, an area that includes the Middle East. (Kaitlin McKeown/The Virginian-Pilot via AP, File)

'Feels terrible': Iran a year after US sanctions reimposed

Iran must resist US sanctions through oil, non-oil exports: Rouhani