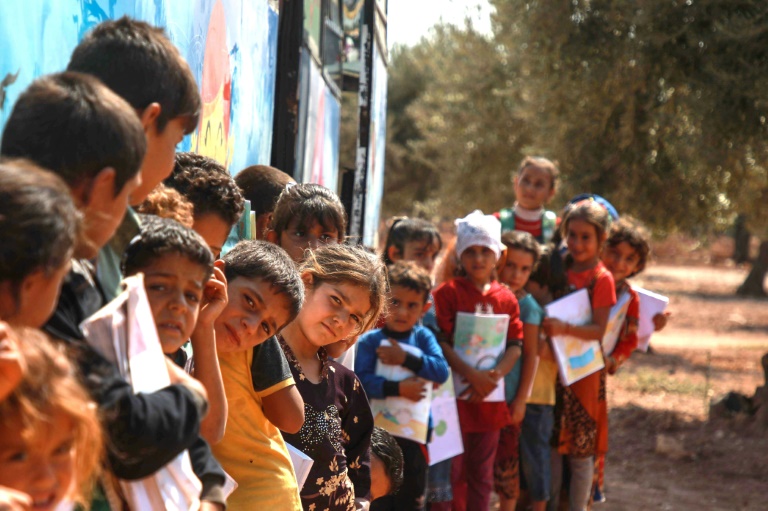 The United States vowed a response Thursday as it said it had confirmed another chemical weapons attack by Syrian President Bashar al-Assad’s forces, although there were no fatalities.

The Assad regime used chlorine on May 19 in Latakia province during its ferocious offensive to take back the last major rebel stronghold in nearby Idlib, Secretary of State Mike Pompeo said.

“The United States will not allow these attacks to go unchallenged nor will we tolerate those who choose to conceal these atrocities,” Pompeo told reporters in New York, where he was taking part in the UN General Assembly.

“The United States will continue to pressure the insidious Assad regime to end the violence directed at Syrian civilians and participate in the UN-led political process,” he said.

He later took part in a meeting on Syria with his counterparts from France, Germany, Saudi Arabia, Jordan and Egypt, who said in a joint statement: “The use of any chemical weapons in Syria shall not be tolerated.”

Four people were injured in the attack and, while there were no deaths, it marked the first known chemical attack in a year and raised fears of further use, said Jim Jeffrey, the US special representative for Syria.

“We fear that the regime, which has very weak infantry forces, will try to use chemical weapons once again to make up for its inability to seize ground by combat power,” Jeffrey told reporters.

No independent verification was available of the attack from northwestern Syria, where rights observers say that more than 1,000 people have been killed and 400,000 displaced since the government began its bombardment in April.

The United States and France had both earlier aired suspicions of a chemical attack but had held off on making a formal determination, saying more research was needed.

Pattern of chemical use

International investigators say Assad has repeatedly used chemical weapons against civilian targets in his brutal quest to win the civil war, in which more than 370,000 people have died.

Drawing a contrast, President Donald Trump ordered strikes with 59 cruise missiles in response to a sarin gas attack in April 2017 in the rebel-held Idlib town of Khan Sheikhun.

The reprisal evidently did not deter Assad, who enjoys strong support from Russia, which has vetoed UN Security Council bids to rein in Assad and deployed its military to Syria.

Jeffrey believed Russian officers were aware of the chemical attack, saying: “It’s very hard for me to believe that professionals as good as that, the way they are spread out, would not know of something like this.”

The United States announced one countermeasure on Thursday, slapping sanctions on a Russian network of three individuals and five vessels for supplying fuel to Russian forces in Syria.

Pompeo said that the United States was donating an additional $4.5 million to the Organization for the Prohibition of Chemical Weapons, the Hague-based body that monitors the international treaty banning such arms.

But Pompeo appeared to downplay the prospect of military action, noting that the attack involved chlorine, which affects the respiratory system.

“So it’s a bit of a different situation,” Pompeo said.

But he warned: “The Syrian regime should know and the world should appreciate the fact that we’re going to do everything we can reasonably do to prevent this kind of thing from happening again.”

The US finding on chemical weapons came in a week that offered one glimmer of hope, with the United Nations announcing the formation of a committee to write a new Syrian constitution.

The group will involve both the government and opposition, although there is no consensus on which direction they will take the constitution.

Family stayed in Syrian town during offensive as rebels ousted

Syrian government closes in on town that was bombed with sarin