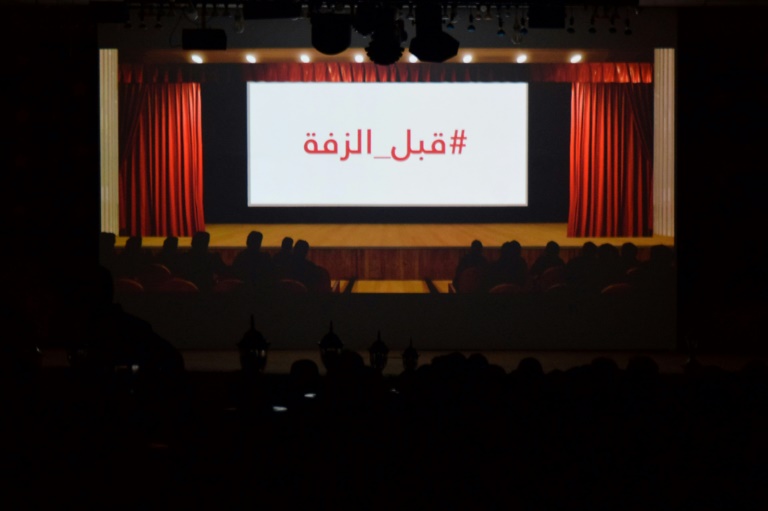 On opening night, Yemeni director Amr Gamal held his breath to see if anyone would turn up for his film, screened in a makeshift theatre in the war-torn country.

More than a week later, the reception hall-turned-cinema is still packed nightly as residents of the southern city of Aden bring their children, friends and neighbours to see Gamal’s “10 Days Before the Wedding”.

The movie, which tells the story of a couple struggling to wed amid war and its aftermath, is Gamal’s debut feature film — and one of only a handful of Yemeni productions to come out over the past two decades.

“Our biggest fear was first and foremost that no one would come to see the film,” he said after a screening earlier this month.

“We thought there was no way we’d have a big turnout because everyone is so afraid,” Gamal told AFP.

“But the unexpected happened.”

“10 Days Before the Wedding” centers on the lives of Rasha and Maamoun, two young Yemenis whose wedding day was put on hold in 2015, when Saudi Arabia and its military allies joined the war between Yemen’s government and rebels in an attempt to bolster the army.

The couple’s second attempt to wed, after the conflict calmed in the government bastion of Aden, is complicated by the aftermath of war, including poverty, assassinations and sporadic battles.

“There’s always a parallel war after it’s officially over… after the violence has technically ended,” Gamal said of his film.

“And unfortunately so many ambitions, dreams, are destroyed in the face of war across the Arab world.”

The story has struck a chord with Yemenis in Aden, who have packed the makeshift cinema for each of the film’s eight scheduled screenings.

With children and babies in tow, they grab popcorn from a sidewalk concession stand before heading inside for the show, breaking into applause as it comes to an end.

“The film was amazing. It was true to reality, it literally parallelled our lives here in Aden — a city that’s really suffering. That’s something that truly deserves to be heard and seen,” said one audience member after a screening.

Another movie-goer, carrying his infant daughter, hailed the film as “indescribable”.

While the movie has proved a local hit, Gamal struggled to secure what he described as “modest” funding for his film, which was cast and shot entirely in wartime Yemen.

The film went ahead with a reported production budget of around $30,000 (25,650 euros) — and without a theatre in which to premier it, as local cinemas have shut down due to budget cuts or damage.

Gamal and his team instead converted a local wedding venue into an improvised theatre, arranging red velvet dining chairs into rows and installing a pull-down projector screen.

The production team also had to face the daily struggles of life in a country wracked by conflict — from hours-long power outages to cellular network failures.

“We actually had to drive to the actors’ houses to inform them of a change in schedule or location because there was no signal half the time,” Gamal said.

He credits the people of Yemen for making his film possible.

Upon seeing the cameras and actors in the streets, they brought them water, cheered them on, and in some cases offered up their stores and homes for filming free of charge.

“It was insane to produce a film in Yemen now, under the current conditions,” said Gamal.

“But… it was a way of speaking back, of challenging (reality), and I think that resonated with the audience. They felt like it represented them,” he added.

Yemeni directors have fought for decades to represent their country, and its people, on the silver screen.

Following the unification of the once-independent north and south in 1990, Yemen gradually lost its cinemas to religious fatwas, negligence, poverty and war.

But the country’s filmmakers have refused to give up, with a handful of Arabic-language movies released in recent years.

Oscar-nominated “Karama Has No Walls”, a documentary short by Sara Ishaq, tells the tale of unarmed protesters who hit the streets of Sanaa only to be met with sniper fire.

“Karama” — Arabic for dignity — was the theme of the March 18, 2011 protest in the Yemeni capital that became one of the bloodiest days in the country’s history, outside of the war.

Yemeni documentarian Khadija al-Salami also made headlines with her 2014 film “I am Nojoom, Age 10 and Divorced”.

The film tells the real story of Nojood Ali, the 10-year-old child bride who rebelled against her father’s decision to marry her off — a practise still legal in Yemen.

The young girl walked herself to court, demanded a lawyer and became the first Yemeni child to be granted divorce.

The film garnered international recognition for Salami, herself a former child bride.

Picking leaves from a vine, Yemenis try to stave off famine